By Megan RadognaAugust 29, 2018No Comments 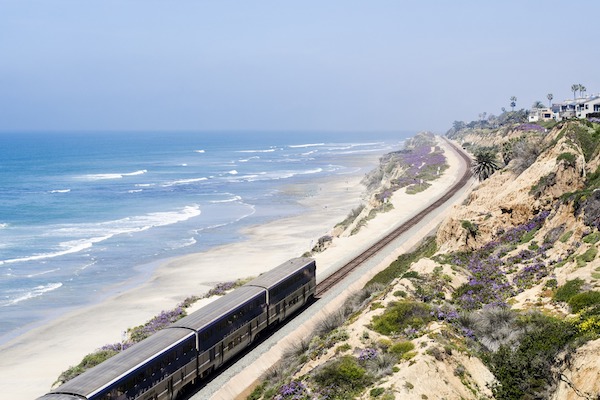 On any given day, a traveler in Montreal could be boarding an Amtrak train to New York, someone in Chicago could be on her way to New Orleans, and someone in Kansas City could be headed to Los Angeles. Other than the trains shepherding them across North America, what connects each of these people?

Alex Hoyt, Executive Editor of Amtrak’s The National, faces some version of this question with every issue of the magazine. Amtrak links 500 cities across the U.S. and Southern Canada. Copies of The National fill the seat back pockets of every Amtrak train, putting each issue in front of 5.2 million travelers.

Creating a magazine that connects with such a diverse readership comes down to telling local stories that resonate on a national level. “Every story is trying to showcase some facet of our national identity,” Hoyt said. “How does this shine a light on a community, an American idea, a region, a landscape?”

Here’s a closer look at how The National crafts local stories that speak to a national identity and connects those stories with readers in digital as well as print.

460 residents, one island, and the national implications of their story

Tangier Island is isolated, “16 open-water miles from the nearest mainland town in Virginia.” The community, which is known for harvesting blue crab, is so remote that it has its own distinctive dialect. And now their home is sinking into the Chesapeake Bay.

Earl Swift describes the island’s dire situation in an excerpt adapted from his book in the August/September 2018 issue of The National: “In fact, the lower Chesapeake’s relative sea-level rise—the one-two punch of water coming up and land going down—is among the highest on earth, and of all the towns and cities situated on the estuary, none are as vulnerable, none as captive to the effects of climate change, as Tangier.” According to projections from a 2015 Scientific Reports study, Tangier could be underwater by 2060.

This story The National shared about 460 residents of an island off the coast of Virginia is really about all of our homes, a microcosm of the global impact of climate change.

Not only does the approach of connecting local communities to national issues intuitively click, but it makes sense when you consider aggregate attention data. The geographic distribution of online attention for stories about global warming is very different than that of Chesapeake Bay, according to Currents data from June 21 to August 21, 2018.

Views relative to the average for articles about global warming and articles about the Chesapeake Bay in major U.S. market areas. A darker color gradient represents above average traffic. (Currents data, 6/21/18 – 8/21/18)

Underscoring the national and even global implications of the events playing out locally on Tangier Island for climate change expands the reach of the story to an audience spread across the country.

“We can do stories about anywhere in the country—New York or Denver or Tupelo, Mississippi—it can’t be local news,” Hoyt said. “It has to have some more evocative, more broadly appealing element that’s going to transcend local interest and is going to hit human interest.”

Off the rails: How The National plans to expand its digital presence

There are plenty of examples of travel magazines whose digital version consists of a PDF reproduction of the print, but not so for The National. They worked with Atavist, the platform used by publications like The California Sunday Magazine that was recently acquired by the owner of WordPress, to build out their CMS and website. “We felt like we needed a beautiful website for today,” Hoyt said, and they’re continuing to expand their digital presence.

Hoyt began his editorial career with a fellowship at The Atlantic and a stint at a New York literary agency before coming to travel media company Ink, first as senior editor of Rhapsody, United Airlines’ former first- and business-class magazine, and then executive editor of The National. This background in editorial, digital, and the literary world informs how Hoyt and his team shape stories that appeal to travelers from all angles: service journalism about where travelers can eat, drink, and stay; long form reporting, literary essays, and poetry; and profiles of everyone and everything from Questlove to the inventor of CRISPR to Spike Lee.

“What does someone taking the Acela have in common with someone taking the Empire Builder from Chicago to Spokane? In a way, the breadth of our readership gives us freedom to assign stories that we think would speak well across the country,” Hoyt said.

Currently The National shares these stories on Amtrak’s social media platforms, but they’re expanding their digital footprint to include their own dedicated channels. Hoyt anticipates people will naturally gravitate to the various story formats and authors on social media. 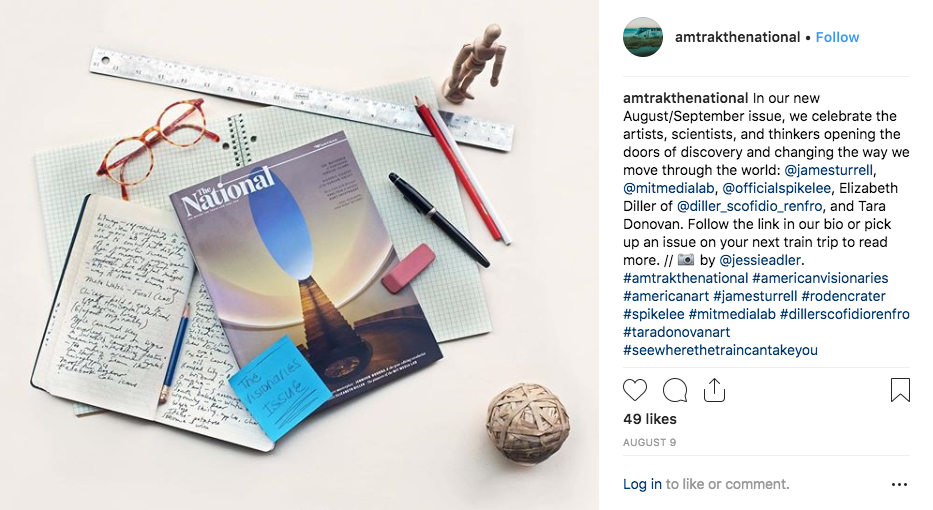 The National‘s photo portfolios will find an audience on Instagram. “We’re sending great photographers on long haul Amtrak routes to capture the country, these 500 destinations and the landscapes in between them, and they’re coming back with stunning photography,” Hoyt said.

Another upside of evolving their digital presence? Data and testing. Speaking of sharing content to Facebook, Hoyt said: “We can see what’s working, and what’s not.”

Inspiring readers to see where the train can take you

Like the train, The National is meant to take you from here to there, what Hoyt described as “a reading journey.” Each issue intentionally opens with shorter pieces, transitions to more in-depth pieces, and ends with emotional pieces. “If you go from beginning to end, there should be a movement to it that’s almost like a piece of music,” Hoyt said.

Passengers are invited to take this reading journey at a unique time: those in-between hours of being in transit, a liminal space when some of the usual distractions fade away. It’s a time for focused attention. And with their expanding digital presence, The National will bring even more local stories to the attention of a national audience.

No matter when and where you’re reading The National, Hoyt said, “To borrow Amtrak’s slogan, every story should inspire you to see where the train can take you.”