Home » 3 Analytics Reports Every Writer Should Be Using 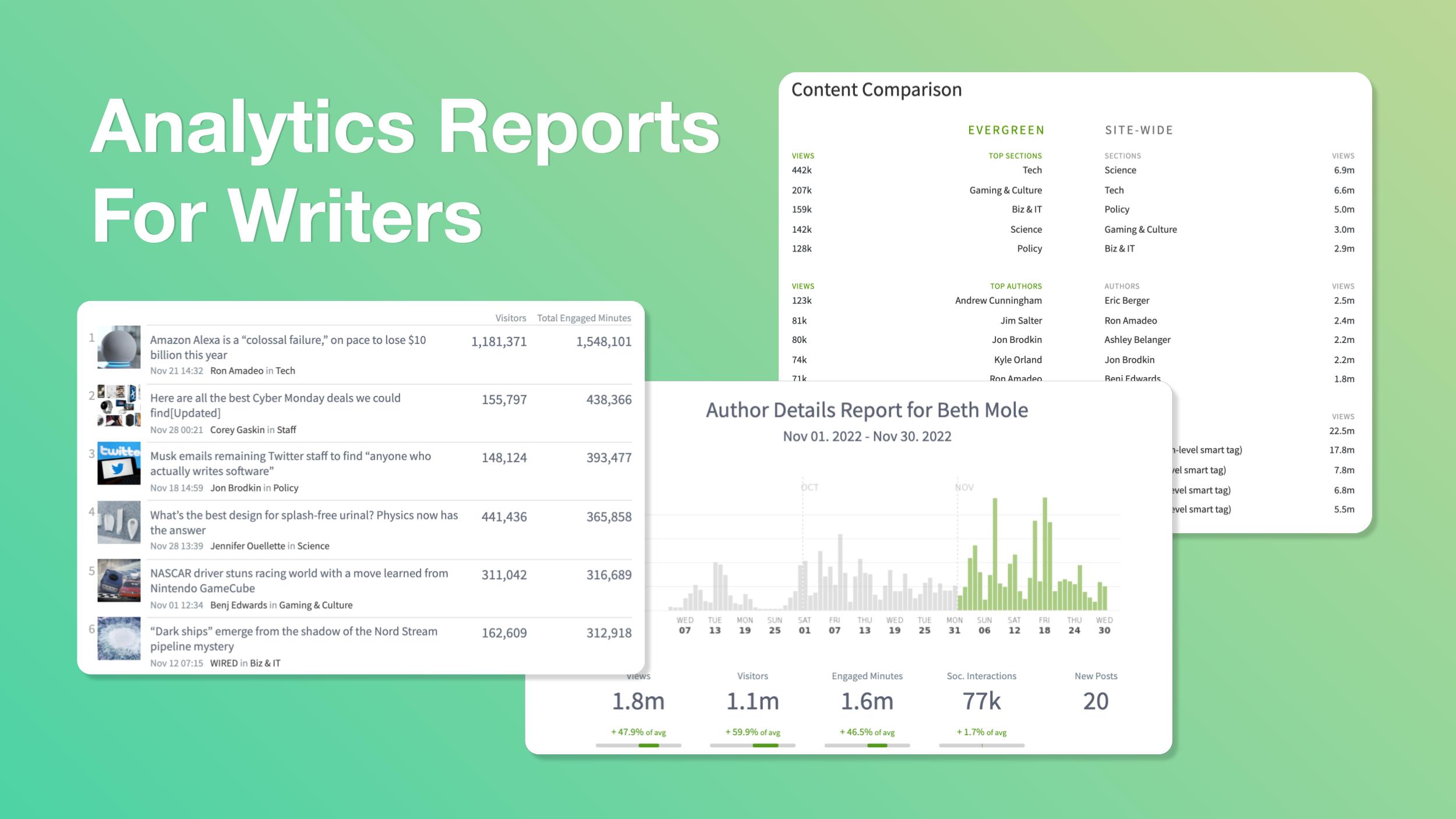 As the person who trains Parse.ly customers, I get a lot of questions from writers and editors about reports. What kind of reports should my team be pulling? How often should we be running reports? What is the information in the report telling us?

Most of the information in Parse.ly reports is available in the analytics dashboard. The main difference between reports and the dashboard is that reports are designed for simplicity and clarity while the dashboard gives you more in-depth contextual information.

Some people prefer to do most of their content analysis in the dashboard because they can click around and customize it quickly. The dashboard gives them flexibility and control, whereas reports can add to an already overflowing inbox.

Other people prefer reports because they want the information delivered to them when they need it. Since reports can be delivered automatically, they can look at it when they have time. Reports simplify what they need to know and can easily be shared, both internally and externally.

Reports are often used in regular meetings to get a status check and for teams to discuss strategy and tactics. They help everyone get on the same page and give an overview on a particular aspect of their content strategy.

Why are reports important?

No matter the role, people working on digital content share one important question: How is my work performing? “My work” can be the stories a person is writing, or a topic under someone’s purview. It can be a project, or it can even be an entire website. A report can tell you the number of stories published in a given timeframe, the topics covered or initiatives worked on, along with their performance and impact.

Here are three reports I commonly recommend when trying to answer the question “How is my work performing?”

Report One: The Details Report

The Details Report is my #1 recommended report because it gives a comprehensive overview on a given topic—it’s several reports in one. It shows you the top stats for a topic with a holistic lens. Why have five reports in your inbox when you can have one?

The Details Report shows 10 results in a number of categories, giving people a snapshot of a topic. Ten results is enough to get a status check, but not too many that it becomes unwieldy.

A writer can pull a Details Report, and choose the timeframe and primary metric that means the most to her. For example, if she wants to understand how many stories she published last month and the ones people spent the most time engaged with, she can use “last month” as the timeframe, and choose either total engaged minutes or average engaged time as the primary metric. She’ll see her top 10 stories by that metric, the top 10 stories published in that timeframe by that metric, the top topics within those top 10 new stories, and the traffic patterns for her stories—all in a matter of seconds.

And if she decides that she wants to see the same information from a different lens, she can easily go back and edit that report to highlight a different metric or a different timeframe, among other options.

Editors can do the same thing for their own section or topic. They can see which writers are writing under the topic, the overall traffic to that section, and what sources are contributing to its success. If anyone wants to go deeper into a particular aspect of the report, they can pull a Top Listings Report with more results.

Identifying and understanding evergreen stories is another common topic our customers are interested in. “Evergreen” refers to any content that has a longer-than-average shelf life. The duration and definition of evergreen varies depending on the organization and the scenario, but Parse.ly has a couple of tools to help you determine that yourself.

Parse.ly’s Evergreen Report is a quick report that pulls stories that Parse.ly has identified as being evergreen according to a strict definition. These are stories and topics that get consistent traffic (pageviews) at least 21 days (three weeks) after publication.

For some organizations who primarily publish evergreen content, this definition may not matter, but for the more news-focused organizations this strict definition impacts how and when to give stories a boost. Because Parse.ly’s evergreen definition has that three-week cutoff, this is a report you want to run with a long enough timeframe—generally at least a month. A report pulled with a shorter timeframe more frequently will deliver similar results and will be mostly noise; you won’t be able to detect changes.

How much evergreen content published and promoted will vary depending upon your business, which impacts your content strategy. Some teams focus on evergreen content like guides, which will be treated differently than the evergreen gems in topics that are more news-focused, or have a shorter evergreen shelf life.

An example of the insights an evergreen report can deliver for newsier teams are articles on Covid booster shots, availability and rollout; people might read about this weeks or months after first announced. This is also an example of a story that can be updated with new information as it becomes available. 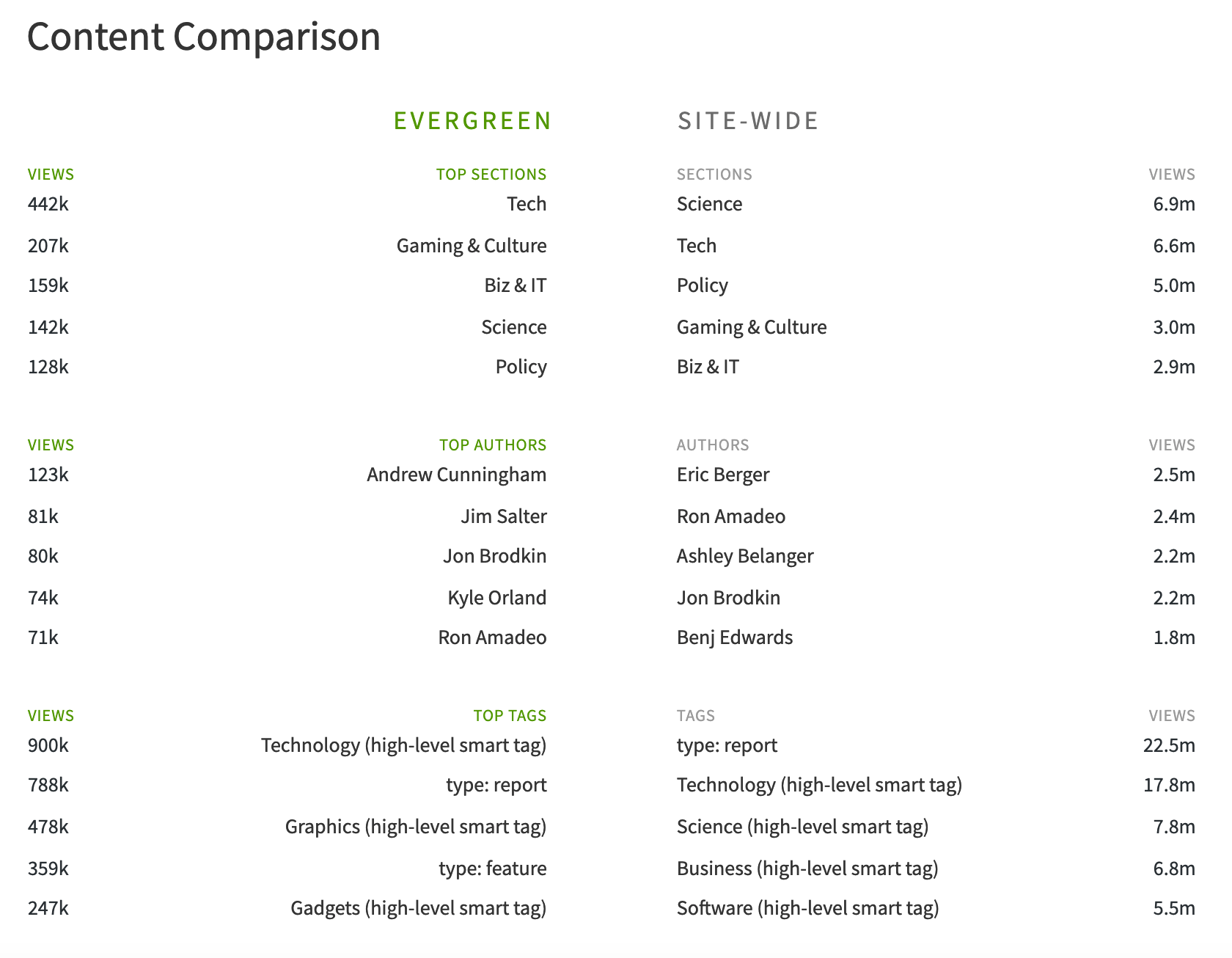 In addition to showing the top 10 evergreen stories in a time period, the evergreen report features something not available in the dashboard: a content comparison among topics and writers of evergreen content with everything else on your site. Don’t put too much emphasis on the writers here; there are some writers whose beats tend to be evergreen in nature, and a runaway piece can put an author on the top of the list. But this content comparison can show if there is a huge difference in your evergreen topics versus everything else published.

The Top Listings Report is the first report most people pull in Parse.ly, and many never go beyond it. This is a mistake because while the top listings report is valuable, most people don’t know how to extract the most value out of it. The most popular Top Listings Report is a Top Posts Report by Pageviews, which is where a lot of people get stuck. They see their top posts for a given timeframe and go “ok, now what?”

This shouldn’t be your first report. It should be the report you pull when you need a longer list of results. 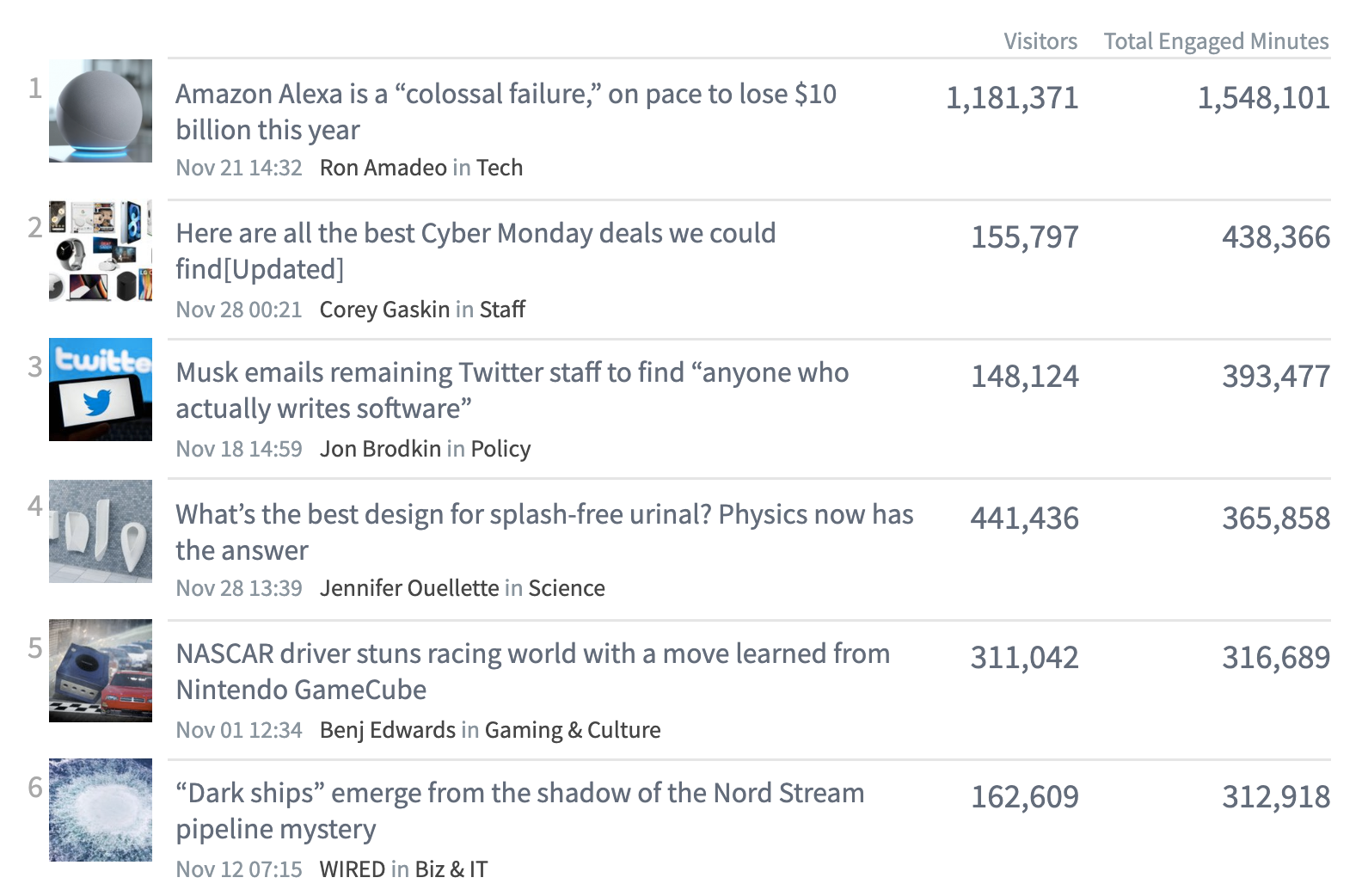 The Details Report and the Evergreen Report only give you 10 results in each of their categories so you can compare results and easily read and transmit the information. But there are many situations where 10 results isn’t enough. That’s when a Top Listings Report becomes truly valuable.

Many customers know that their top evergreen pieces remain relatively stable. The number one and number two stories may switch places from time to time, but their content strategy takes those top pieces into account and they make sure those stories are optimized and updated to remain in top standing. In this case, an evergreen report is only going to tell them what they already know.

But do they know the second or third tier of evergreen? This is where you can make changes, experiment, and see real improvement. Maybe it’s that these stories aren’t optimized as well as they could be, and you can squeeze additional pageviews or engaged time on them, thereby lifting up your entire site.

Pulling a Top Listings Report with 50, 100, or 500 results lets you separate out different tiers of content and see the entire picture. Do you have a big dropoff after a certain threshold? Are you publishing too many stories under a particular topic that aren’t worth the effort? Should you redirect energies towards topics that fall in the first half of the pack?

These are questions and patterns you’re not likely to see if you only stick to the top 10 or 20 results, especially if you work at a place that publishes a lot. Most people know the top hits without needing to pull a report on them, but they don’t know the workhorses, the content that keeps the site humming.

To do this in Parse.ly, there’s a little-known filter called “Lifecycle.” This allows you to isolate stories that Parse.ly has deemed “evergreen.” You can also use the Lifecycle filter to highlight stories that are on their way to evergreen status—they just haven’t hit 21 days of publication yet. This filter is only available on Top Listings Reports.

You don’t need to use reports in Parse.ly to answer most questions; most questions answered in reports you can also answer in the dashboard. But reports are an easy way to share information, both internally and externally, and they are formatted to be digestible. For many people starting out, reports are a way to whet their appetite, to get them what they need to see quickly and efficiently.

Our Reporting Guide explains how to set up each of these reports, which are available in HMTL or PDF format. They can be run on a cadence of your choosing, and are out-of-the box—meaning you don’t need to write logic or have to work through lots of drop-down menus to pick what you’re looking for.

There are some reports that are available as exports (Top Listings and Stats Over Time), which enable you to do more advanced analysis, with annotations, color coding, and the feature set that spreadsheets allow you to do.

Parse.ly offers even more advanced reporting, including comparisons to track changes over time and to view more granular visitor data, bottom listings to uncover pieces that need improvement, audience overview to keep tabs on your growing and changing audience, and more. There are shortcut buttons to set up these reports on most dashboard pages.

Want to learn more about reporting in Parse.ly?