Appointment viewing: What happens online when we all watch the same show?

By Kelsey ArendtJune 11, 2019No Comments

Home » Appointment viewing: What happens online when we all watch the same show? 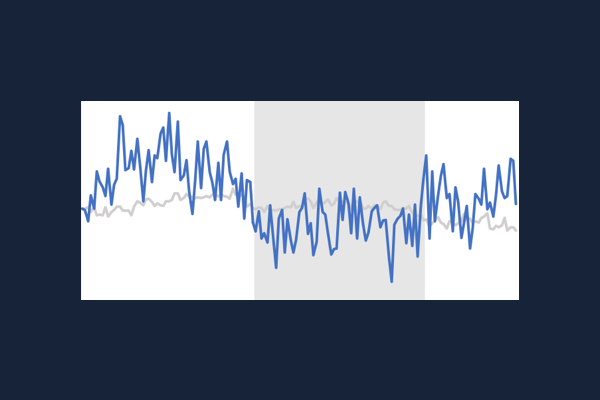 We’ve been measuring attention on the internet for coming up on ten years now. One thing that remains constant: our collective amount of attention doesn’t change much day to day.

We can actually see in our data systems and processing plants a representation of the “amount” of attention, measured by the number of stories people read online. And partly because the scale of data we work with is so massive (two billion daily events), variations are incredibly rare.

Here’s our collective attention on a daily basis (weekdays only), visualized: 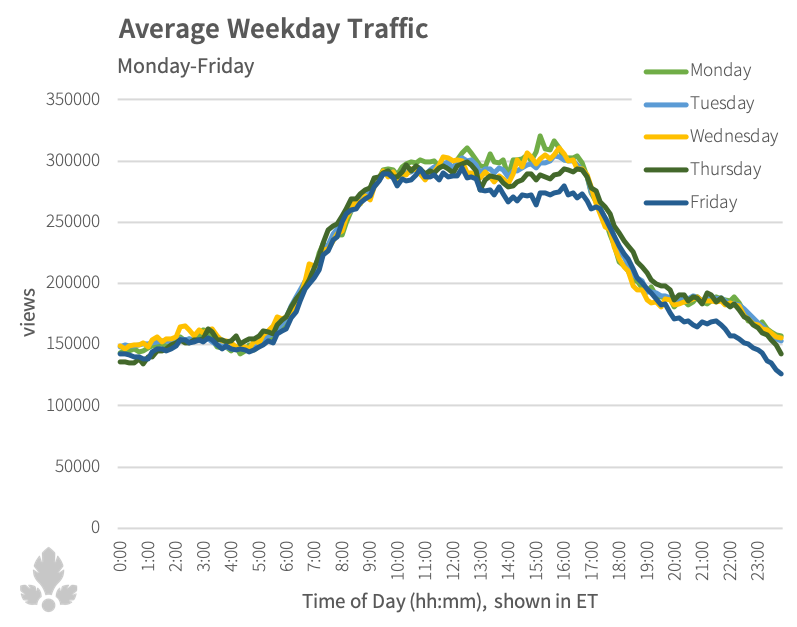 Starting at about 6 am, we all start to get online. We pay the most attention on Mondays, Tuesday, and Wednesdays. By Thursday, we start to get a little distracted in the afternoon. By Friday at lunch, we start to check out.

And while, yes, we’re all attached to our phones no matter where we go, we do pay less attention to the online world on the weekends. 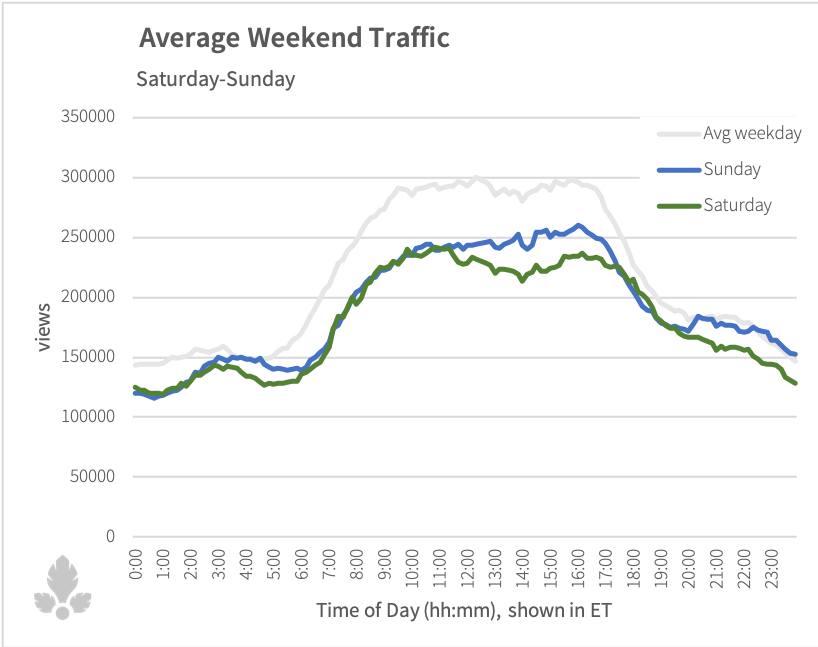 You can expect to see these patterns play out pretty much everyday, with the exception of major holidays, throughout the year.

That doesn’t mean the pattern never changes though.

For this massive data set made up of everything we pay attention to online to change, something has to happen to a lot of people all at once. These are moments that we share as a large community. Last year, when the White House and FEMA sent a test alert to phones across the US, we could literally “see” people pay attention to it in our network. 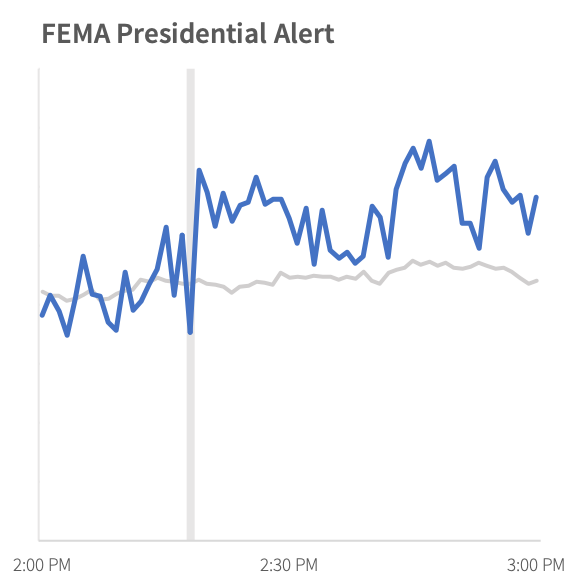 Compared to an average day, calculated over all Wednesdays in 2018, you can see people’s attention leave the articles, posts, and videos they’re watching online right as the text goes out at 2:18 pm ET. And then, immediately attention spikes. Perhaps people went to search for information about the text or they just all got distracted by the text and decided to browse the internet.

These patterns also allows us to examine behaviors and attention online for “Appointment viewing,” or “appointment tv.” With more streaming options, the demise of appointment viewing has been a challenge for broadcasters and advertisers, as moments of collective attention increasingly rare.

I took a look at the data for some of the major appointment viewing moments that were big enough to cause a change to the typical daily patterns seen above. Read on for specific examples, but here are the three things I took away from examining the data:

Appointment viewing attention: Comparing GoT to NCAA to HRH

What does the Iron Throne have in common with Donald Trump? The online pattern of attention during the first episode of the epic HBO show mirrors the presidential emergency test text. First, we see a steep drop, as people log off to watch the episode. 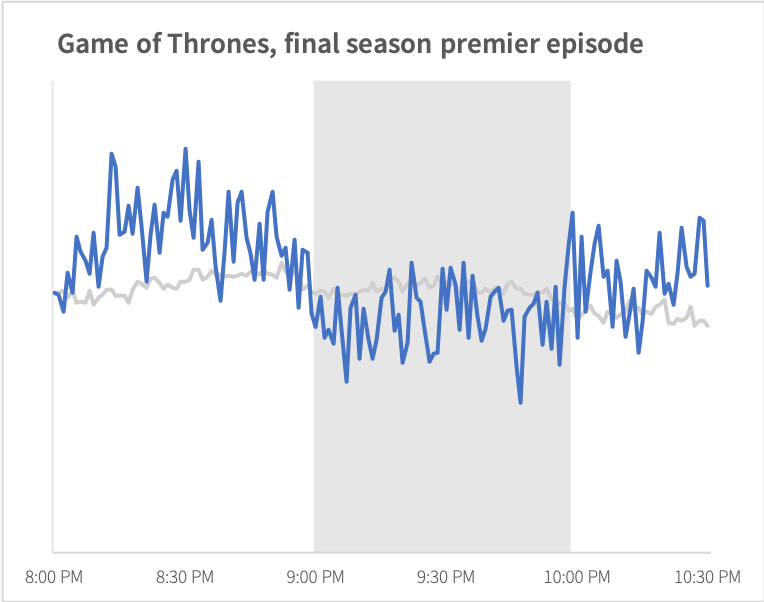 Episode takes place during from 9 to 10 pm Eastern time, represented by the grey bar.

Then, right at 10 pm Eastern, people got back online. Lucky for them, in 2019 alone, sites in the Parse.ly network published over 90,000 new articles about Game of Thrones. Which meant they had plenty to read, even if the recaps weren’t live yet.

However, let’s do some basic supply and demand calculations here. Even with the spike in demand of readers, there was so much content posted about GOT that per article, the readership per article took dip overall. 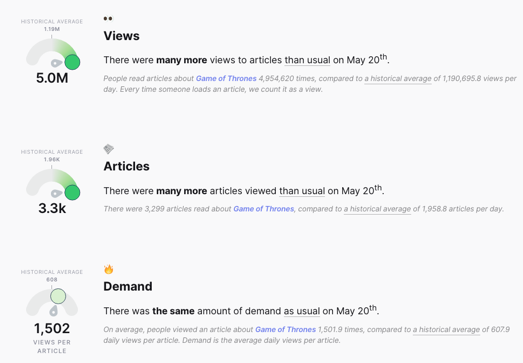 While views spiked after the finale, the amount of content did too, meaning on average, each article saw less traffic. Data from Currents.

If you didn’t already have a following for your Game of Thrones coverage, it’s unlikely that posting a lot about it afterwards made much of an impact.

Lesson #1 for appointment viewing: build up an audience in advance of the event. Make sure that your audience knows how to find your content around a major event, and what they’ll expect from that content. The NYTimes’ Game of Thrones newsletter and interactive landing page was a great example of this.

So does that mean we can expect to see the same action for every moment on television? A dip and then spike? The length of the event and amount of surprise may play a factor in that answer. Take Harry and Meghan’s 2018 wedding. There is a slight, but perceptible dip as the guests started to arrive. However, it overall doesn’t deviate much from an average Saturday morning. 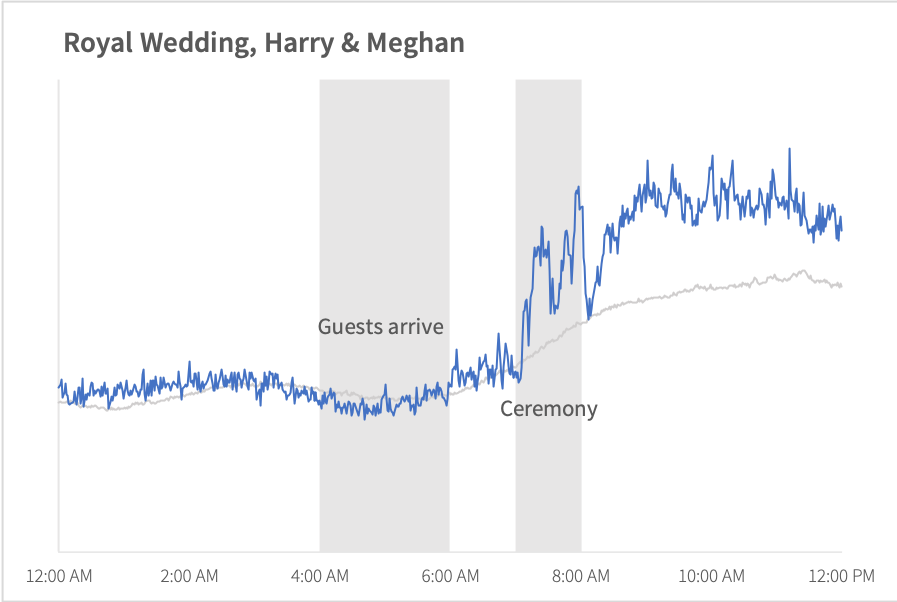 Where the change in behavior (and similarity to the other events) does happen is after the wedding. Compared to a normal day, we spent this particular Saturday paying attention online. Sorry to all the children’s soccer games and friends at brunch we ignored to look at photos online!

Sports remains one of the sure bets for appointment viewing, partly because of our online attention during and after the games. Push alerts, text from friends, tweets, it’s impossible to avoid knowing what happened and stream it later.

However, sports events also have an interesting attention pattern that deviates from the ones we looked at previously. There’s often more activity before and in the middle (halftime) than there is immediately after the game. This could be due to the to the timing of games, usually played late in the evening in the US. 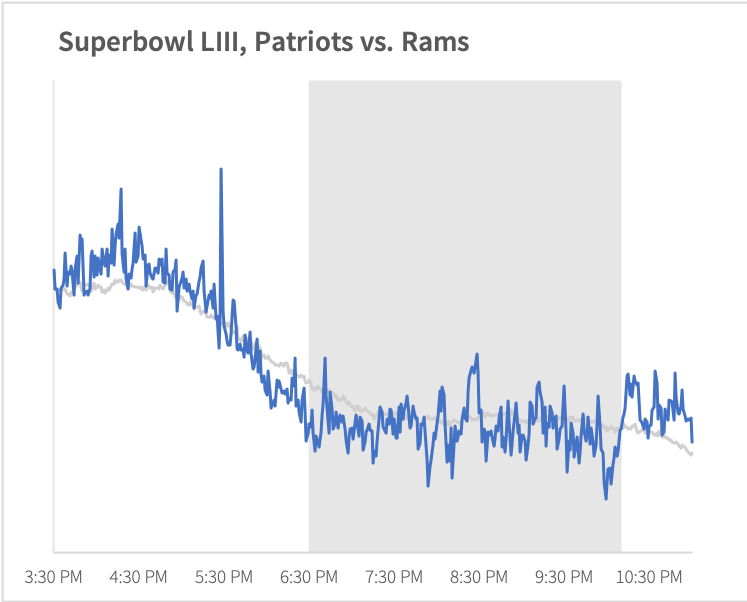 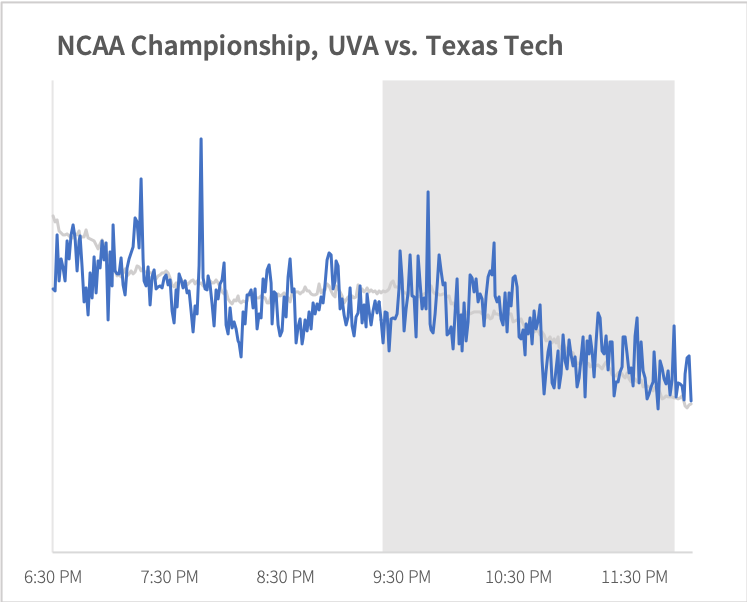 If you’re trying to engage the sports audience, you either want to make sure your prime efforts are all focused on pre-game coverage, or you may want to consider ways to reach the audience the following day in a way that isn’t just a recap. 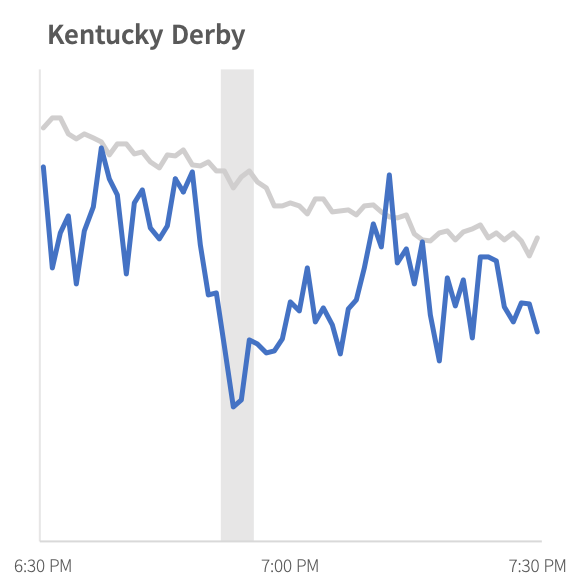 While the Kentucky Derby has one of the lower viewing audiences, it’s very quick duration makes it incredibly easy for everyone to put their phones down for a few minutes and enjoy the ride. 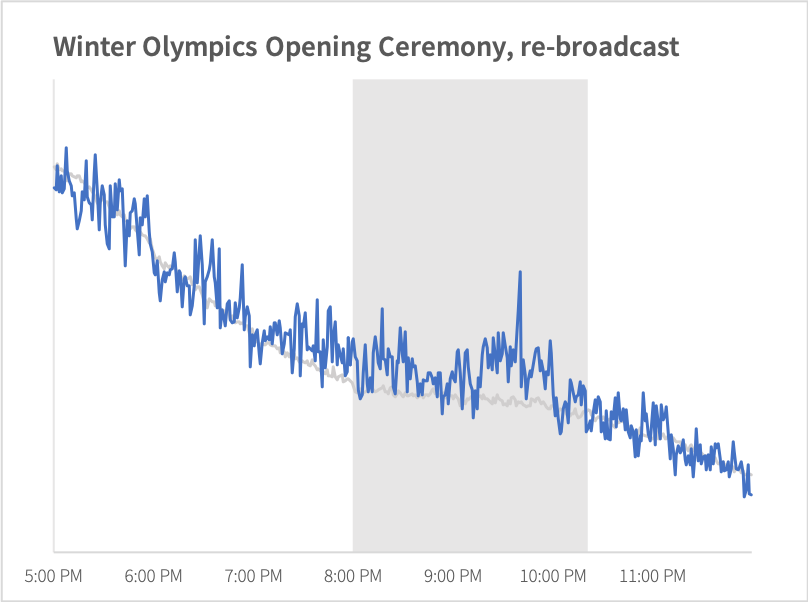 There’s been plenty written about viewership slipping for the major awards shows. But among the big four, there’s a slight but noticeable difference between the Grammys and Oscars, and the Emmys and Tonys. It seems more people are online during those first two shoes, again potentially multi-screening while reading about the movies or songs, or generally just participating in online discussions about the outcomes. 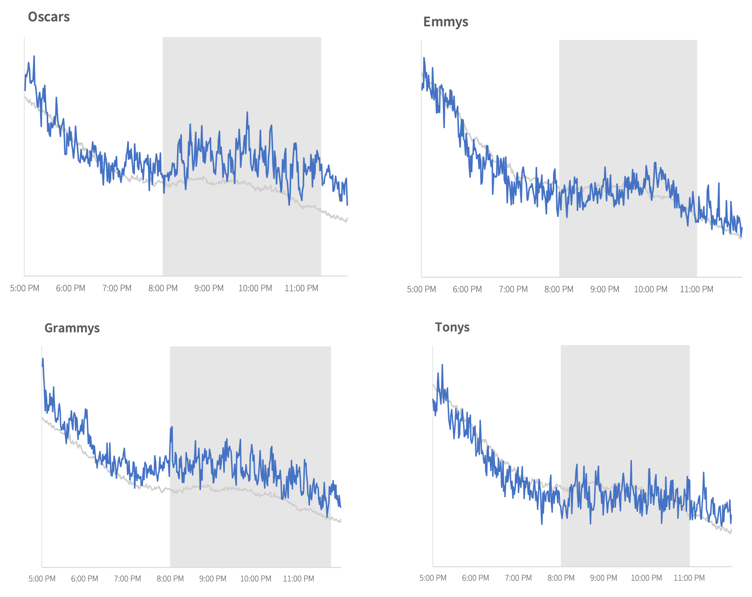 The who’s-who and who’s-wearing-who coverage plays an interesting role too. Take a look at the attention patterns for the Oscars and the Grammys: while the awards show officially starts at 8:00 pm ET, the spike in attention online begins   30-60 minutes prior as their favorite celebrities peacock around the red carpet.

With marketers and AI experts predicting that personalization will dominate all content in the future, there’s some nostalgic comfort in these moments where we all share something together. And not every moment needs to move the needle across the globe; collective moments exist for every audience.

We hope you all enjoyed this moment, together.

Data for this article was based on Parse.ly’s network. Explore topics and attention for yourself in Currents.