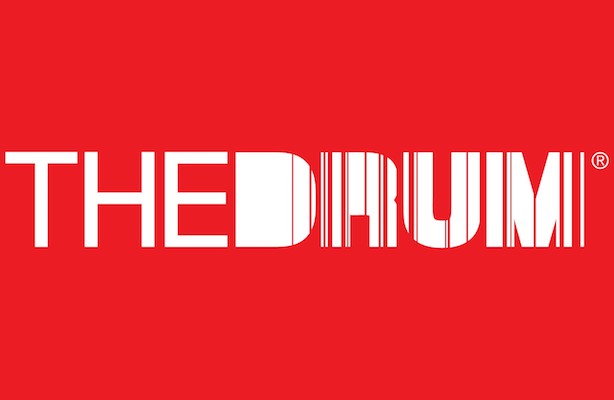 The Drum is a business publication that has come of age in the digital era. From its roots as a publisher of regional and UK marketing news it is now a global media platform and the biggest marketing website in Europe with 1.2 million unique users per month.

Much of its success has been predicated on knowing what its readers want—from breaking news stories to in-depth analysis of the hottest topics, and an early emphasis on quality digital journalism that would resonate with marketers globally.

As a publication that has long championed the growing strategic role of data for brands and marketers for understanding audiences, new product development and as a communications tool, it was inevitable that The Drum itself would want a data-driven solution for a digital future. 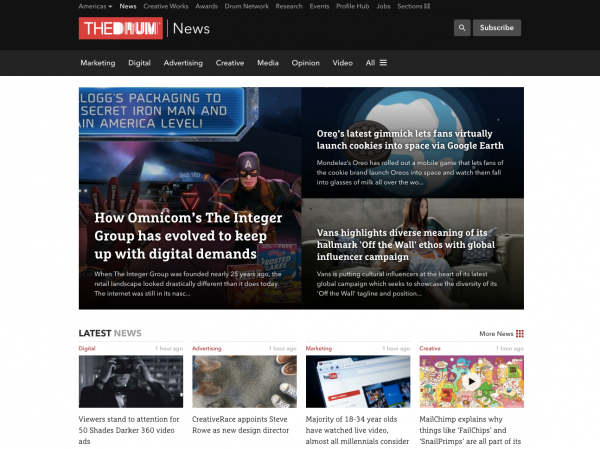 Analytics has become a crucial part of The Drum’s journalism as it informs and steers the publication’s understanding of what its audience wants to read. Here are three ways The Drum applies content analytics to their strategy.

News editor Seb Joseph says: “While a lot of how we shape our content is based on the expertise of our reporters, having Parse.ly has been great at reaffirming the gut instincts we have.”

Whether it is working out what type of headlines work best or getting better at understanding peak windows for the team to push traffic out in the day, having real-time feedback allows Joseph to focus more on the finer parts of the editorial strategy.

One recent example was an article about footballer Paul Pogba moving to Manchester United. An earlier, well-read story had cited adidas’ involvement in the move so the team knew that it would be popular. “However,” adds Joseph, “the platform helped us realise just how big it had been for us as a traffic generator—we were able to tweak our editorial agenda for the day to follow up on that initial story.”

Simply put, the news desk is able to be much more immediate, strategic and measured in its approach to reacting to popular stories on the site. Very often the team will expand on a story when audience engagement is high by either looking for another angle, or increasingly building video into a story.

The dashboard is also helping shape the overall editorial themes of the online publication with weekly and monthly reporting being used to flag the interest (or otherwise) of the wider themes the publication covers.

“News is becoming so commoditised now that we’re constantly trying to add value to everything we do.” —Seb Joseph

The platform is easy to use and available to all, but to really emphasise the importance of the real-time data from the site, there is an overview screen now placed above the news desk. This visibility is helping reporters engage more and enables Joseph to direct the team with more certainty of a good result. 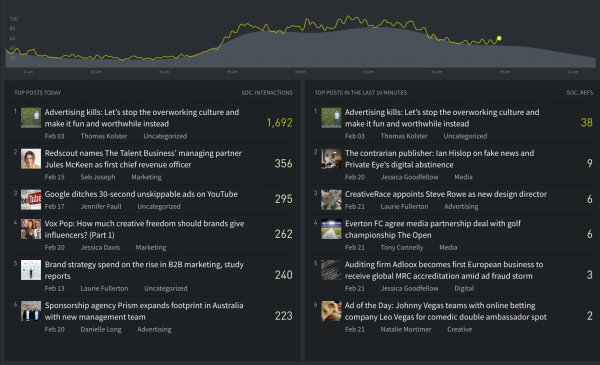 The Drum overview screen in the Parse.ly dashboard

As a result of being able to see immediately which stories were doing well, and when, The Drum made the decision to rearrange its content teams to capitalise on peak time and engagement.

Now, from the publication’s Glasgow hub, there are teams of three reporters who start shifts at differing times. One shift starts at 7am to hit the morning traffic spike with mobile and tablet-friendly content, and the next starts at 2pm GMT to do the same for its growing US audience. Short, snappy ‘need-to-know’ articles work best at these commuter-peak times.

The Drum magazine is published fortnightly in the UK, with a quarterly US print edition. Both are dominated by longer-length articles including features, sponsored content, columns and thought leadership pieces across its pages. 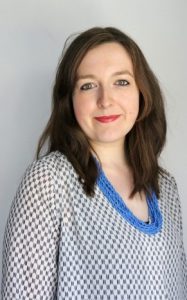 Features are published both online and in the print edition, so the insights that come from the Parse.ly platform not only influence what appears online but also in the distributed magazine. It has, says features editor Katie McQuater, changed the way the team plans its long-form content wherever it appears.

Here is where Parse.ly’s suite of metrics filters comes into its own: rather than simply looking at page view numbers McQuater focuses more on the number of engaged minutes and average time spent on the piece.

She also looks regularly at the most popular tags, which helps her decide how feature content should be tagged on the site and to identify which content themes are attracting an engaged audience. For instance, topics such as programmatic advertising, data and social media influence are of perennial influence to readers.

Editor Stephen Lepitak concurs. He says the analytics allow the editors to understand which writers are best connecting with The Drum’s audience and to pinpoint content that might not immediately reach a mass audience, but might be longer-form or long-tail, slowly bringing in readers over a period of time.

The Drum uses Parse.ly’s Evergreen Overview report to help do so. Whereas most online articles have a median lifecycle of 2.6 days, many of The Drum’s in-depth analytical and ‘how to’ pieces impact well beyond this.

Editors can plan content for specific dates and events and witness whether or not the audience finds it to be of interest, and learn what needs follow-up. Commercial teams can then sell advertising around content they know will be popular when running similar pieces in the future.

The Drum also has a content marketing arm, The Drum Works. Proving the worth of such evergreen content is increasingly key when partnering with companies on commercial content—be it long-form articles, videos, white papers or bespoke research.

The Drum’s ‘Everything You Need to Know About…’ series

Data shows that many of The Drum’s most popular content marketing initiatives have been in serial form, such as its popular ‘Everything You Need to Know About…’ strand, which takes marketers through all the basics of a particular topic over a series of weeks via short-form videos supported by feature articles and social media activity. Content can be optimised and reoptimised to fit the brief.

Says The Drum managing director Andy Oakes: “We are much more able to advise clients on content marketing strategy as we have a much better idea about content consumption as a whole.”

Oakes adds that in-house marketing has been improved with insights such as that awards stories were rarely read widely unless they contained a brand example.

The Drum, Today and Tomorrow

Data and analytics are shaping the way The Drum addresses its audience but, critically, not dominating it, as Lepitak points out.

“Despite knowing how to follow audience figures, we also retain journalistic independence to follow stories or content that we believe that our readership should be aware of—whether those stories are likely to be read widely or not.”

Analytics give everyone in the newsroom from the journalists to commercial and the management team a holistic view of performance, from the individual to the overall; respecting what the reader wants to read without forgetting The Drum’s ethos.

It is about delivering a better (long term) product for the audience The Drum serves in a commercially viable way. It is why, when The Drum overhauled its website earlier this year, Parse.ly’s analytics played such an important part—by giving everyone involved a far better view of the way that content is consumed.

Has your digital media organization made changes based on data and analytics? If you’d like to share a success story about your team on the Parse.ly blog, contact us.