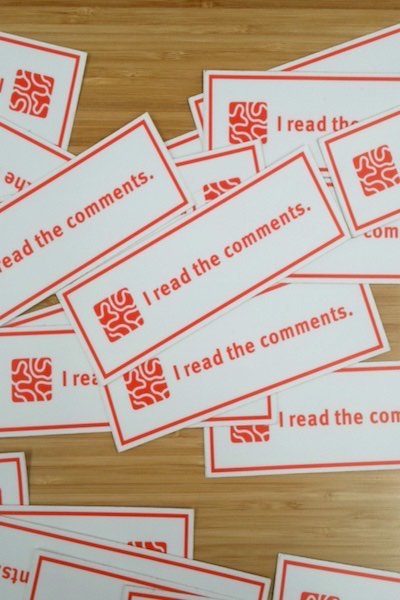 Do you read the comments? If you hesitate to wade in, especially on a piece you’ve written, you’re not alone.

Negative voices tend to get elevated, while other diverse and measured voices are shouted down; it’s not a place where you’d want to spend your time.

However, despite the prevalence of hostility and bad behavior, it’s important for journalists to engage with reader comments. Andrew Losowsky, project lead at The Coral Project, told an audience of media professionals that refusing to look at the comments prevents an opportunity to build community, and community in turn leads to better journalism.

The Coral Project, Losowsky told the crowd, has dedicated itself to answering a key question: What steps can be taken to foster positive interactions in comments sections?

Take a look at your nearest comment section. Can you answer these questions?

The biggest predictor for positive behavior in a comments space, according to their research, is clear guidelines and the enforcement of those rules. While you think about setting up guidelines for your own commenters, here are four rules that newsrooms should follow.

In a productive comments section, the goal is for people to share thoughtful comments. For this to happen, you need to listen and respond.

According to a report by the Engaging News Project, the number one reason why people post comments is “to express an emotion or an opinion.” Other reasons include “adding information,” “correcting inaccuracies or misinformation,” and “taking part in the debate.”

Responding to these sorts of comments initiates a positive feedback loop in the ways readers and journalists are engaging with content.

The Economist is trying this on Medium with photo essays and behind-the-scenes content written by reporters. The Economist’s deputy community editor, Adam Smith, has found “the caliber of comments is higher on Medium” because the platform “attracts people interested in arguing about ideas.” The nature of the comments has encouraged journalists to respond to feedback on their pieces, which keeps the positive cycle going.

Rule 2: Deal with Trolls and Understand their Motivations

Research conducted by The Coral Project found that wanting to be heard is a common motive for trolls. When interviewed, trolls frequently expressed that when they started by being nice in the comments, no one listened. When they changed tact to negativity, they got a response.

Letting community members know their voices have been heard can help curb unproductive behavior. When bad behavior does occur, it’s important to have a plan in place.

Clearly delineating comments sections’ guidelines at the top of a space and transparency when hiding or deleting comments bolsters safe spaces.

Then, whatever the course of action is, transparency is key. If you decide to delete or hide negative comments, for example, make it clear both in the rules from the outset and when a moderator enforces the rule.

The ease with which both readers and journalists can participate in a comments section depends on how the space is designed.

The Coral Project is developing open source software to enable newsrooms to create safe, productive spaces for comments. These software options make comments sections easy for readers to use and also help journalists moderate the spaces and engage with their audience.

Products built by The Coral Project include Trust, a tool to help identify a variety user types from potential sources to trolls, and Ask, a tool to help ask your audience a specific question to improve your reporting. Another product, Talk, is in development, and will help structure safe comments sections.

Rule 4: Understand Why We Should Care About Community and Comments

Losowsky stresses that “journalism needs to create spaces for dialogue that are not filter bubbles.” Disconnect between newsrooms and their audiences can have a major impact. Take the 2016 presidential election, for example: Millions of people in the United States voted against what they were told would happen by the media. Comments sections are one way to bridge this gap and hear what readers have to say.

Hosting a dialogue is as beneficial to a reporter as it is to a reader. When a journalist responds to comments, readers build trust. Interacting through comments is a kind of engagement that leads to reader loyalty.

A base of loyal, engaged readers is likely to include experts on the beat a reporter covers as well as readers who are passionate about the topic. These experts or interested readers can be the perfect sources for a story. Taking it a step further, it could even be possible to develop such a committed audience around one reporter’s work that they would follow if a writer moved to another publication.

Cultivating the comments section, in the end, leads to better journalism.

Parse.ly hosts in-person talks monthly. Let us know what you’d like to hear about in future sessions by filling out this survey.