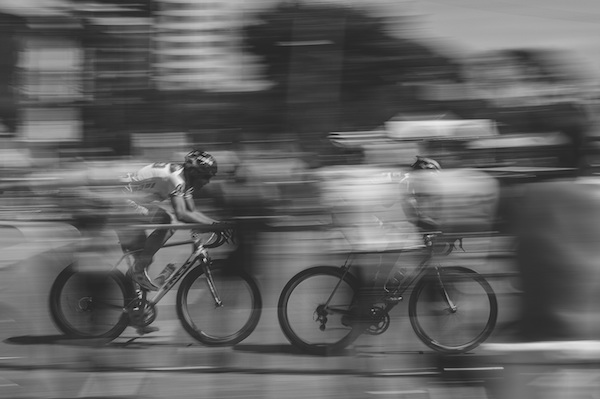 Parse.ly recently surveyed 270 professionals at publishing sites, brands, and agencies about their use of content analytics. We’ll be highlighting major themes from the results in a series of posts on our blog. Get the full report here:  “Getting There: Content, the companies that create it and the data behind it.”

The first issue of The New Yorker, with a cover featuring Eustace Tilley, was published in 1925. The New York Times started reporting in 1851 when Millard Fillmore was president and the gold rush was underway. Some of the earliest articles in Scientific American, which was founded in 1845, include original reporting on the invention of the telephone and the light bulb.

For nearly a century or more, these publishers have been striving to tell stories that speak to their audiences. The goals of these outlets have been straightforward: get the stories in front of the audiences that need to see them. And so, as content turned digital, publishers sought analytics that represented this goal.

Traditional publishers aren’t the only ones creating content anymore, though. Recently, brands have been responsible for a number of leading editorial-driven sites: First Round Capital, General Electric, The Marriott, and Advocate Health Care are just some examples of brands that have successfully turned the skills used in journalism into part of their marketing efforts.

Unlike their decades- and centuries-old content-creating counterparts, though, brands have had to  work double-time to figure out a content strategy that rivals that of digital publishers. Add in having more complicated goals, like brand awareness and sales, and it’s not surprising that we found that brands lag behind publishers in most content analytics metrics. But they’re catching up, and quickly.

“Brands are much newer at this game than their publisher peers, and they are trying to interpret their data against more complicated goals.” – Getting There

Access to Analytics Increasing, but Comprehension Hasn’t Caught Up

According to the findings in “Getting There: Content, the companies that create it and the data behind it,” the majority of publishers (87 percent) and brands (77 percent) have access to data. 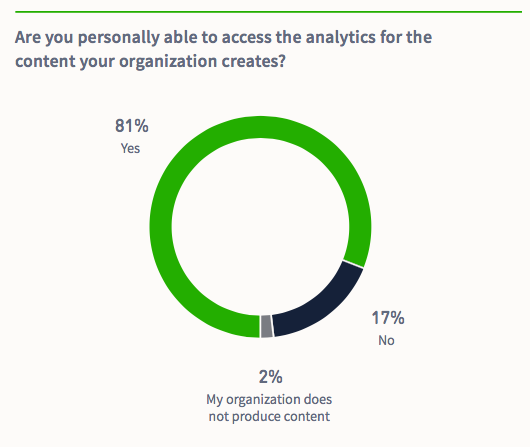 In order for individuals and teams to take action on data, they need to do more than observe it—they need to know what it’s saying. However, less than half of brands (45 percent) report feeling fully up to speed when it comes to understanding the data. 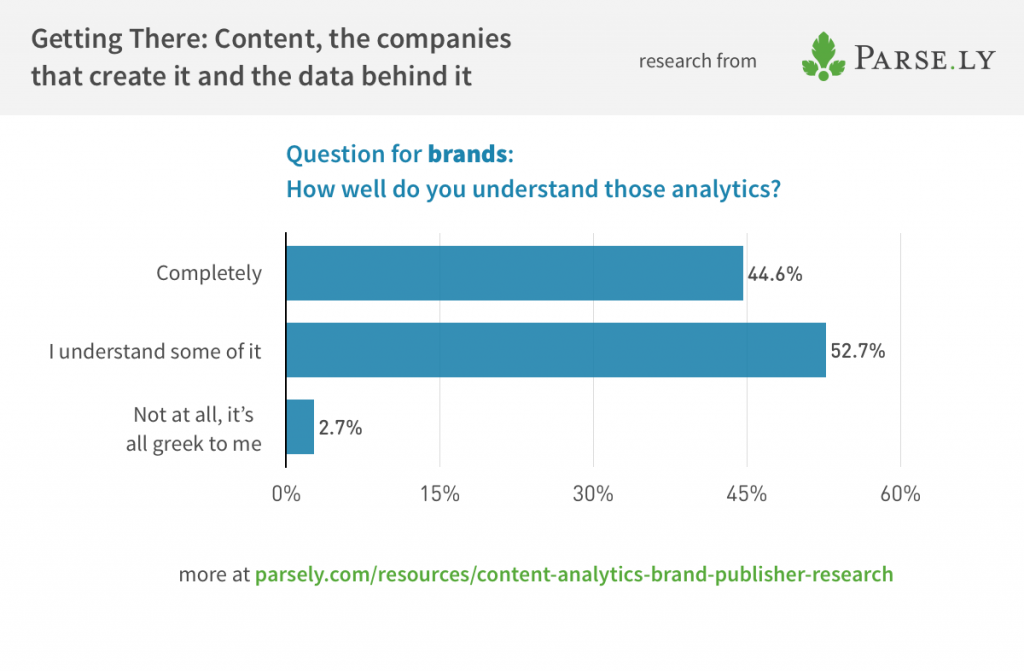 Why does it matter if teams can understand their content analytics? Take what Airbnb had their data team do. The company’s first data scientist, Riley Newman, has written about how Airbnb empowers its data team to act on the insights it finds.

Newman’s data team members were able to make a sizable impact by partnering with engineers, designers, product managers, marketers, and others across the organization to help prioritize their findings throughout the company. According to Newman, “when decision-makers don’t understand the ramifications of an insight, they don’t act on it. When they don’t act on it, the value of the insight is lost.”

Access to analytics should, in theory, help each person in their own organization understand the ramifications of the insights available. However, with 45% of brands saying they completely understand the data they have access to, (and only slightly more publishers reported feeling confident they knew how to use their content analytics – 52%), there’s still room for both groups to make the most of their insights.

52 percent of brands reported conversions as the metric that best determined whether content was successful.

Conversions indicate to brands whether their content is helping to achieve business goals. As one participant said, “I’m the editor of a subscription-based video recipe app. I have a website; I want conversions. So on some level, how do we get people into the product and get them to subscribe? This is the fundamental metric of anything we do.”

However, not all brand respondents agreed that conversions directly represent the best value of content. “[Conversions are] an association directly between a brand and whatever they’re trying to sell. Influencing whomever is making the decision really ought to be the goal.”

Additionally, conversions are not the metric that brand participants are most frequently asked to report on; that honor still goes to impressions.

What’s Next for Brands and their Audiences?

Although brands as a group still lag slightly behind the industry powerhouses of content, they’ve shown enormous strides towards catching up in their perceived ability to analyze and act on content analytics. Considering how gradual the process of incorporating analytics into content strategy is, brands are moving pretty quickly.

The next step in ramping up branded content efforts depends on a particular team’s current efforts. Content output, analytics software and preferred measurement metrics differ from organization to organization. Referencing feedback from peers in the industry can help provide a point of comparison to assess current efforts and figure out what’s next.

Interested in taking a closer look at how other brands approach analytics? Fill out the form below to  get  the full report.