“There’s a huge hunger for political and news content.”

Sachin and Andrew reflect on assumptions the digital media industry made about 2017, including predictions about distributed content, video, and political news, and see what the data says about how trends really played out. They discuss a report from Facebook about how spending time on social media impacts us, the new Chrome ad-blocker, Storify shutting down, and their personal takes on 2018 predictions.

0:53 – Facebook study about whether spending time on social media is bad for us.

5:17 – Chrome is rolling out an ad blocker in February

9:48 – Storify is shutting down its free product.

11:39 – Distributed content played an important strategic role for publishers trying to grow and monetize audiences. AMP in particular saw growth in 2017, even from sites like Reddit and LinkedIn.

“I think distributed content’s here to stay…. AMP has actually gone a little bit farther that I even realized. It’s getting used by Reddit and LinkedIn pretty regularly… [and] Twitter has gone all-in on AMP.” —Andrew Montalenti

15:49 – Assumption: Everyone will pivot to video and text content will die. Reality: Not so much.

“I would say that you can’t count video out but it certainly didn’t change the nature of how people consumed content in 2017. We even saw that long-form content was super strong in terms of engaging individuals.” —Sachin Kamdar

20:35 – The 2016 election raised concerns about trust in media, but data suggests readers embraced digital media: there’s a hunger for political content and high engagement with politics and local news stories.

“I have to say, this is one of the big surprises of the year to me. I think that if you’d come out of the election, you might have thought, ‘Okay, we’ve got a president who really doesn’t like the mainstream media. We’ve got a bunch of political supporters who have created their own media ecosystem to understand truth and information.’ And so you would think that the reaction would be a complete erosion of the press or something. But I think what actually happened is the opposite.” —Andrew Montalenti

24:35 – A closer look at the data behind the stories driving the digital news cycle in 2017 shows the high volume of page views for articles about Trump. 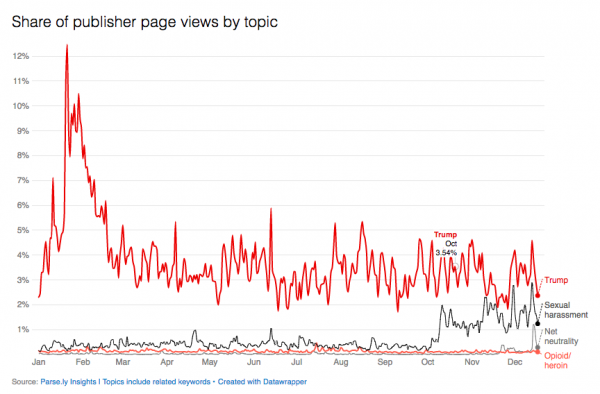 31:45 – “Audio podcasts will continue to astound in terms of both scale and counter-programming success.” (TechCrunch)