“The existential identity crisis that Facebook is going through”

Sachin and Andrew dig deeper into publishers’ risk exposure following changes to Facebook’s News Feed algorithm. Plus, they discuss the increase in younger demographics using social media, their favorite newsletters, and +1/-1 opinions on Silicon Valley (the place, the culture, and the show).

6:24 — Facebook reevaluated its News Feed following research into how using the platform affects users’ psychology. For a deep dive on changes Facebook has made in the last two years, check out the Wired piece “Inside the Two Years That Shook Facebook—And the World.”

8:25 — Why Facebook started to make the shift to prioritizing content from friends over news and how that impacts organic reach to brand pages.

“They saw that when people were consuming content on Facebook but weren’t engaging with it, then they weren’t actually happy with the overall experience…. How they think Facebook can create a more happy or positive experience is when you actually engage with your friends and family around you, so when you comment on stuff, when you share things that your friends are posting, they’ve done research to show that that is more positive.” — Sachin Kamdar

13:50 — Facebook is now prioritizing trustworthy news, but the design of the platform favors engagement over source authority.

16:58 — People want to engage with local news, so Facebook is pushing for it.

18:23 — These changes will affect how audiences find publishers’ content on Facebook. Facebook’s traffic declined over the course of 2017 and it now send about 20% of referrals to publishers.

“A lot of publishers are uneasy and they’re wondering, is this decline going to just keep going? … Back in 2012, Facebook was at around 10% of external referrals, and so a decline that went all the way that low would be almost like a five or six year reversal of the general trend for Facebook.” — Andrew Montalenti

20:58 — What publishers’ risk exposure looks like in Parse.ly’s network—or in other words, how diversified are your traffic sources? 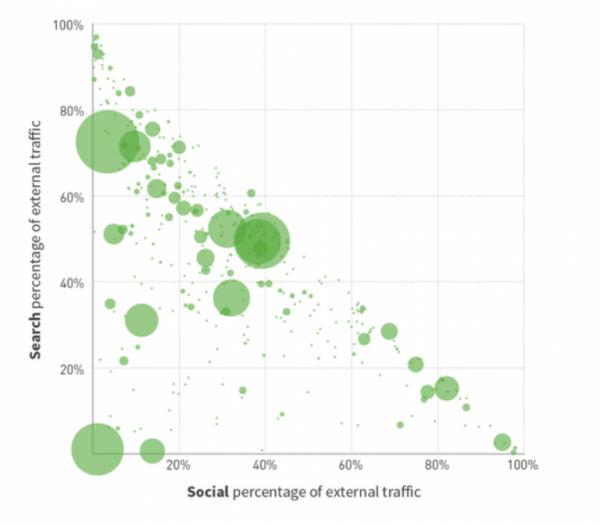 Range of risk exposure to Facebook as the main source of referral traffic. Publishers further to the right of this graph are the most at risk.

23:46 — As Facebook traffic has declined, channels that are optimized for mobile reading and daily habits, like Apple News, Flipboard, Twitter, and LinkedIn, are areas for growth.

25:22 — Publishers with trusted brands and direct audiences in the form of homepage users, newsletter subscribers, or app users aren’t as likely to feel the effects of News Feed changes.