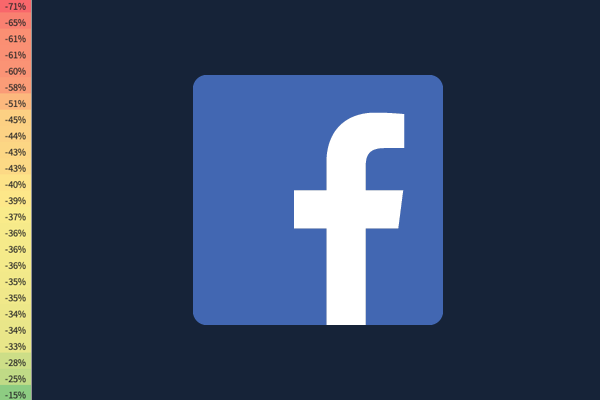 Another big announcement from Facebook has made some people in media understandably nervous. The unknown impact another algorithm, or in this case entire product strategy, change might have has sent chills through audience teams everywhere, like the air that lingers in the subway after a cold, winter night.

While it’s nearly impossible to say what the impact will be of yet-to-be made product changes, we can now see the impact of the last major Facebook change’s effect on referral traffic. We also looked at data about channel where “private communication” referrals come from currently, Direct Traffic, to see what could change about referral traffic from Facebook in the future.

Which categories of content did the 2018 algorithm change affect the most?

It’s been over a year since Facebook announced they would show fewer posts from “pages” and more from “friends and family” (aka, people). The change made the fast and furious Facebook stream of traffic drop by over half its volume in a span of less than a year. The results have been well documented, and not always pretty.

Since the stated change made the posts from brands and publishers’ “owned” Facebook pages less visible, the difference between the referral traffic from Facebook before the algorithm change and after should represent what those pages were posting versus what people tend to share themselves, and that actually gets clicked on.

From 2017-2018, the overall change in traffic from Facebook to our network decreased by 28%. But that decrease wasn’t even across every category of content. For the top ten categories that were most read by audiences coming from Facebook and some of their related sub-categories, here is how traffic changed year-over-year. 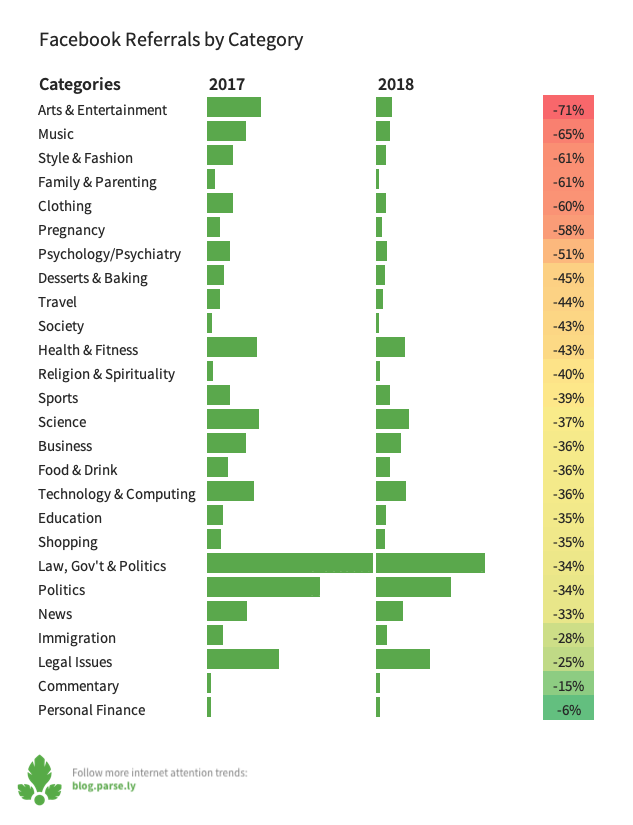 See all of our categories in Currents.

The biggest losers (of traffic): celebrities

Articles about Arts & Entertainment, and Music in particular saw the biggest drop by percentage, 71% and 65% respectively.

Stories in Arts & Entertainment tend to be around celebrities and events like the Grammys and Academy Awards. Style & Fashion have similar (and often overlapping) stories, heavy on celebrities, but there tends to be slightly more cross-over with both business and politics. For example, stories about Melania Trump’s fashion choices and the retail apocalypse affecting clothing companies, rank high on stories viewed. These cross-over stories also rank higher on our “demand” metric, meaning that per article they get higher pageviews.

Similarly the Style & Fashion category at large, and clothing specifically, lost around 60% of the referral traffic from Facebook. Family & Parenting, Pregnancy,

Family & Parenting and Pregnancy articles trend very, very heavily toward celebrity births, with the Royal family having a big year. Toward the end of this year, articles about abortion, Roe vs. Wade, and Planned Parenthood started to creep back into the list of most read stories, especially after the 2018 U.S. mid-term elections.

Publishers pages’ prerogative to push (and/or pay for) celebrity news on Facebook hasn’t changed. But perhaps this data shows us that while people were happy to consume that information from passive sources but not compelled to share it themselves. And as other platforms (Instagram) have grown in users, their audiences may have shifted their readership habits, even if they’re not driving traffic back to the publisher sites (yet).

Hm, hard to spot the trend here… but I’ll try. While Politics content overall still dropped, it dropped more inline with what we saw across the board from Facebook traffic (28%). It also makes up the largest volume of referrals from Facebook, a stat that didn’t change from 2017 to 2018.

It’s not just pages that were sharing political content, it’s people. I’s the people you know, the influencers you follow, or the groups (private or otherwise) that share the links originally. It could also be bots, agents of misinformation campaigns, and other bad actors, but either way, in this case they’re sharing links to real sites with editors, journalists, and enough interest in their content to pay for analytics systems. Whoever it is doing the sharing, the trend undeniably shows that people find and read politically related content through Facebook.

This matches studies from Pew Research that shows that roughly the same amount of people got news from social media, despite the algorithm change decreasing news organizations reach directly on the platform.

“Reddit, Twitter and Facebook stand out as the sites where the highest portion of users are exposed to news — 67% of Facebook’s users get news there, as do 71% of Twitter’s users and 73% of Reddit users. However, because Facebook’s overall user base is much larger than those of Twitter or Reddit, far more Americans overall get news on Facebook than on the other two sites.” – Katerina Eva Matsa and Elisa Shearer, Pew Research 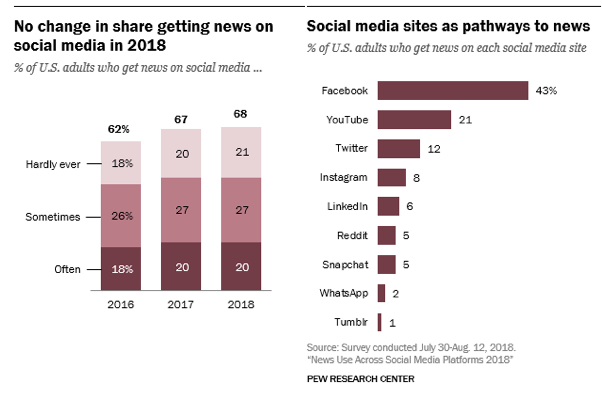 What will the future of Facebook changes mean for this data?

While it’s still too early to know exact details, we can take a couple guesses based on data we have. Despite the newly announced focus on privacy, encryption, and sharing across the Facebook owned platforms there has been no mention of deprecating existing public areas. Because of this, we expect to see similar trends to 2018 numbers in terms content types and volume.

“Facebook is going to continue to exist as it has to date, as will Instagram, including all of the data collection and ad targeting that currently exist. The “Privacy-Focused Vision for Social Networking” is in addition to Facebook’s current products, not in place of.” – Ben Thompson, Stratechery

However, when it comes to the private communications, we can look at another channel: Direct traffic.

Direct traffic drove, on average, around 14% of all traffic referrals to article pages in our network in the past year. By comparison, Facebook sent 15% and Google sent 29%. (One note here – typically we talk about Facebook/Google’s percentage of traffic as a percentage of external, identifiable traffic. Since Direct traffic by definition can’t be identified by its source, we typically don’t compare it to FB/Google.)

So Direct and Facebook already send about the same amount of traffic to sites. What’s different about that traffic? We noted this back in January as well, but Direct traffic sends readers to a much wider set of total articles. For every article viewed from Facebook referrers, three are seen from Direct traffic. This also means that articles with high Facebook views tend to get more viewers per article. The chances of you “going viral” on Facebook are smaller, but the impact from a Facebook referral boost can be much bigger on a per article basis.

Related to this, while Law, Government, & Politics is still the most popular topic through direct referrals, it’s at a lower rate. And Business, Sports, and Technology & Computing all see higher percentages of traffic from Direct sources than Facebook.

Finally, we also see Facebook readership concentrated geographically in the United States. Facebook has a higher readership towards the center of the country. Direct traffic, on the other hand, is pretty similar across the country. However, there are exceptions, with more direct traffic than expected coming from a few locations. The two interesting locations that caught our eye: San Francisco and Washington, D.C.

Facebook’s huge changes in early 2017 meant a tumultuous rejiggering for some publishers. But for the most part, last year showed relatively stable traffic coming from the social media giant. 2019 looks to potentially change that equation again, though the data doesn’t point to the traffic apocalypse. So, prepare for the change, but our advice is to not abandon existing strategies in fear of referrals disappearing anytime soon.