Home » Google Analytics 4 vs. Universal Analytics: Key Differences and What They Mean for Content Teams 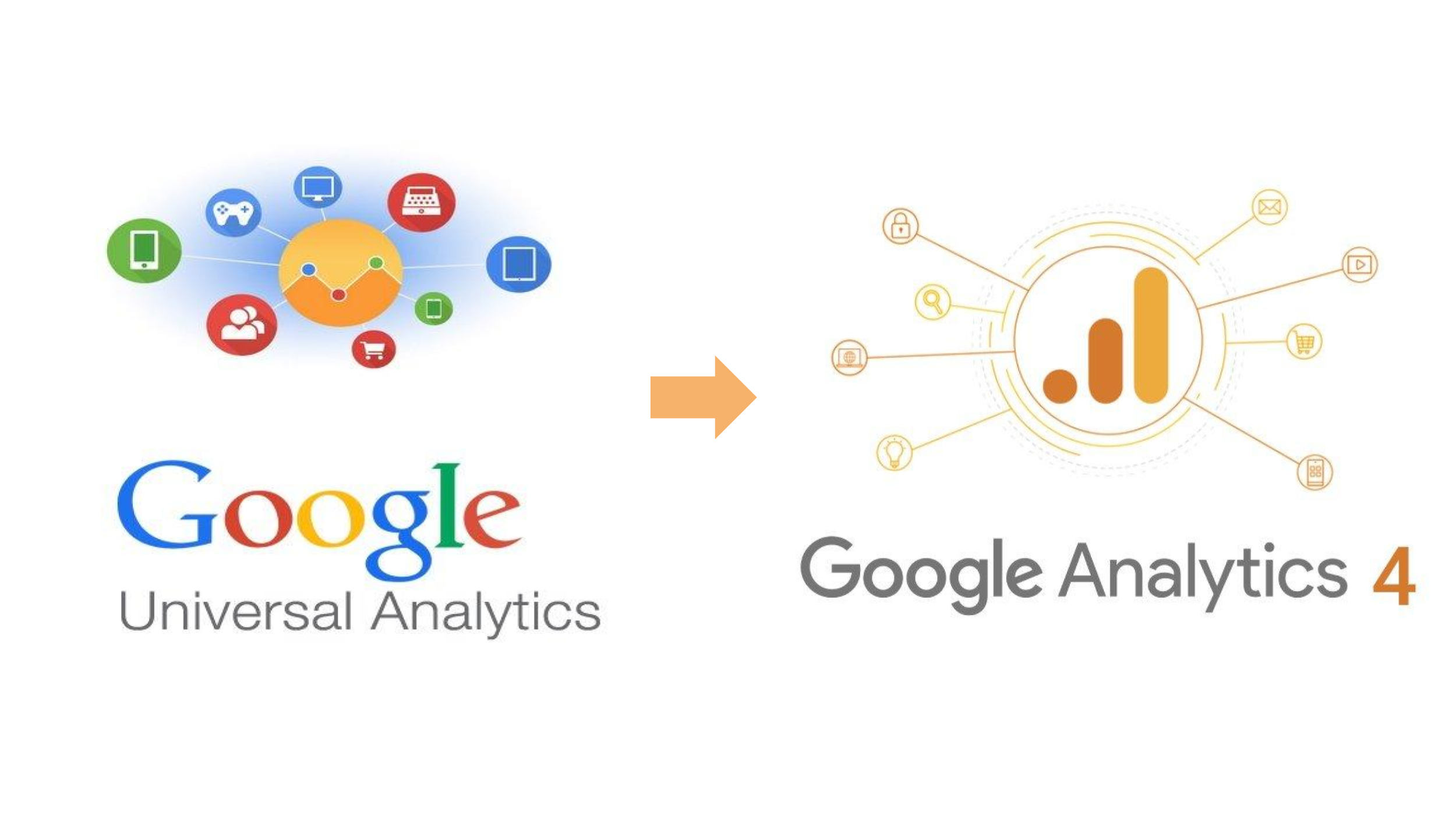 Google recently announced that they are sunsetting Universal Analytics (UA), also known as Google Analytics 3 (GA3), and that users will be forced to switch to Google Analytics 4 (GA4) by July 2023. After that date, UA will be cut off.

Because Google Analytics 4 is an entirely new analytics product, this change is causing issues in the widely deployed UA world and presents a major challenge for GA implementers and end users.

Many publishers and content marketers are actively researching the implications of this change—how it will impact their analytics ecosystems, their workflows, and ultimately their businesses. Some are considering other analytics solutions that better fit their needs as content-focused organizations.

What is Google Analytics 4?

In 2012, Google introduced a new tagging setup called Universal Analytics, which became popular quickly as a simple upgrade from the historical GA. They also introduced a second product in the analytics space called Firebase, which focused on instrumenting mobile apps. 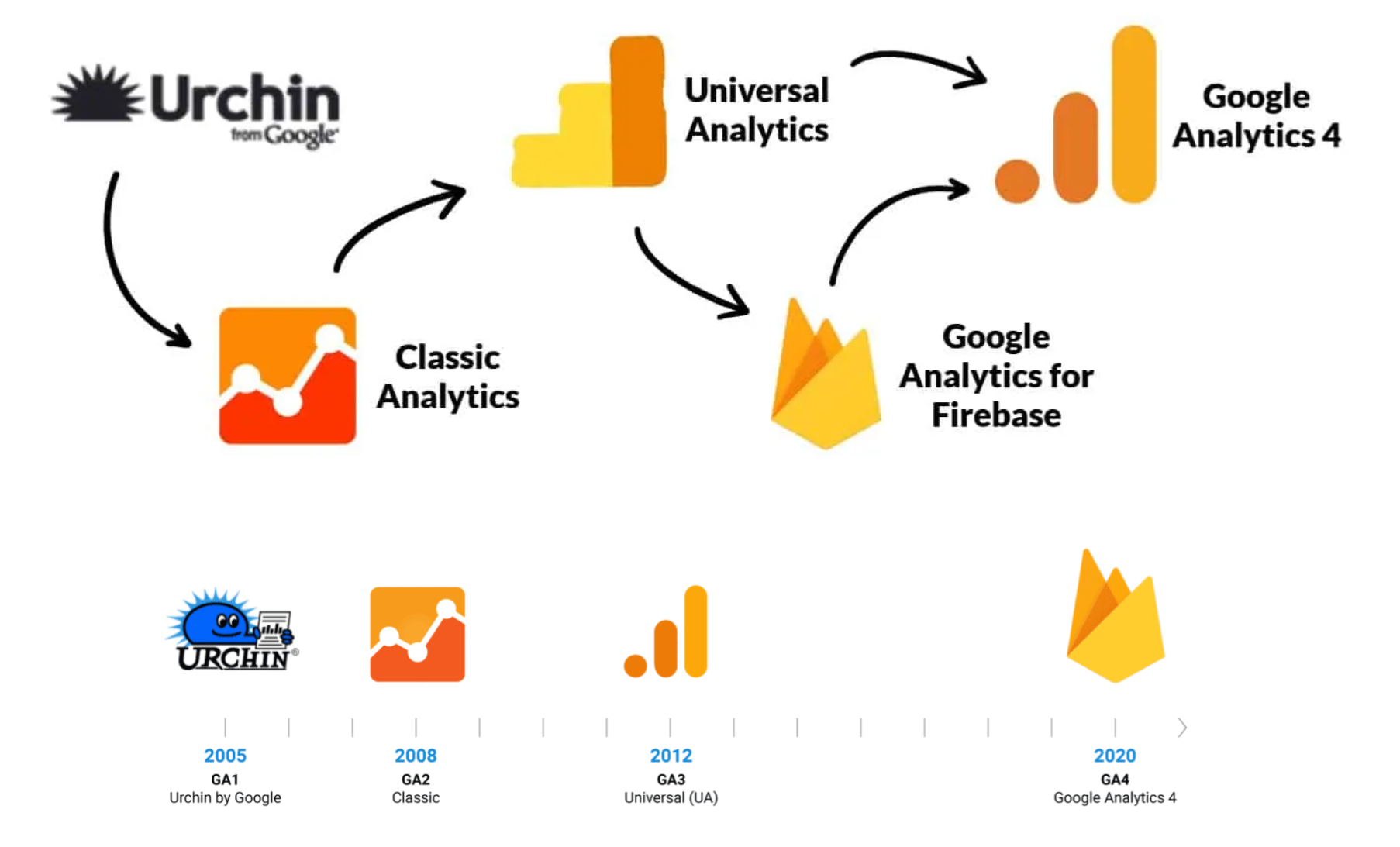 How is Google Analytics 4 different from Universal Analytics?

From a look and feel standpoint, Google Analytics 4 is similar to UA at a very high level, which you can see from the screenshots below. On the surface, many things look similar—the color scheme and the sidebar—but the architecture and functionality of the two products are completely different.

In Google Analytics 4, some functionality is gone while some is revised, and even the labels in the sidebar and UI are different. Importantly, “views” are gone—which, for many people, was the most accessible way to use Google Analytics. Google Analytics is more difficult now without this metric. 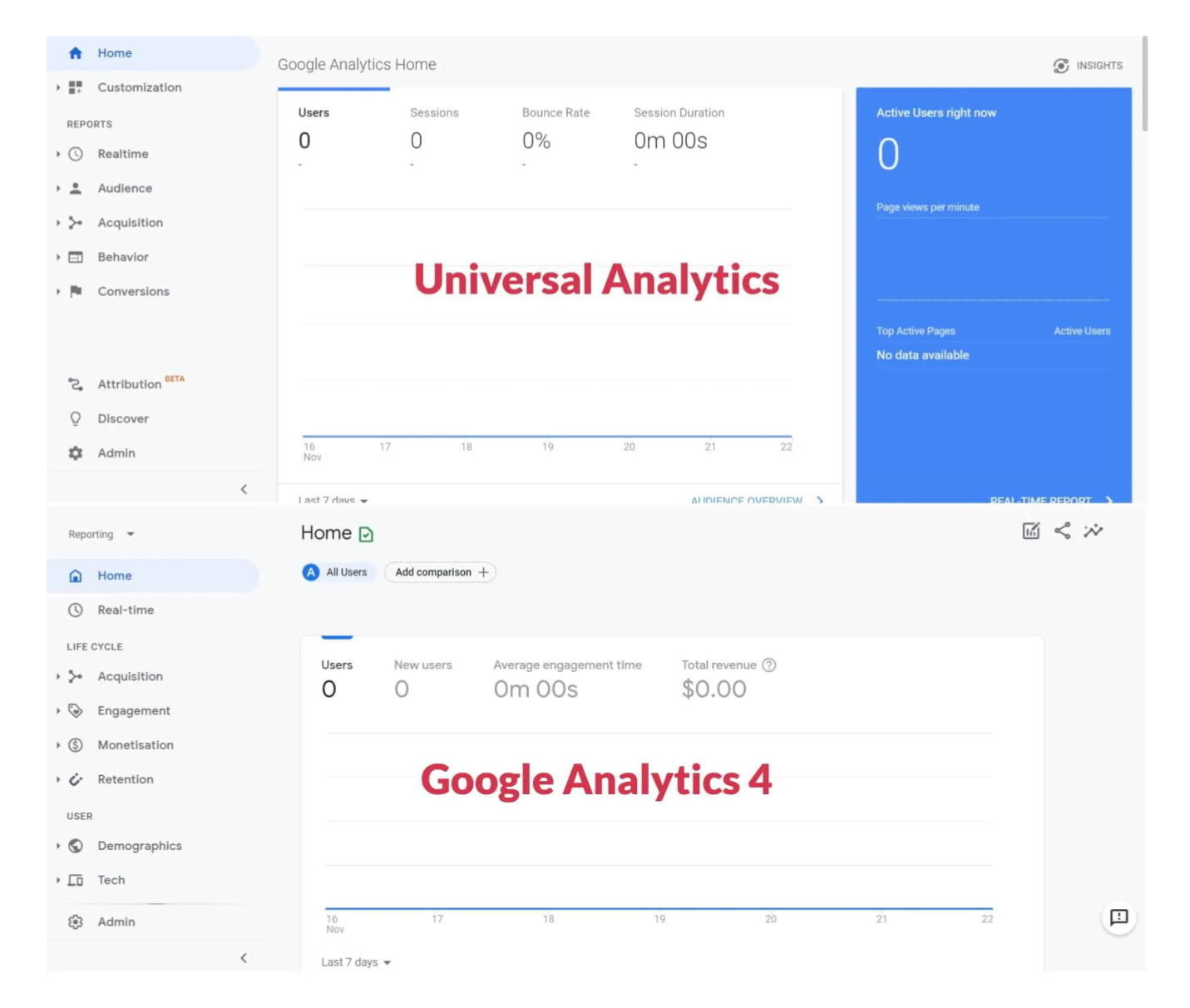 The major architectural change between UA and Google Analytics 4 is switching from a session-based data model to an event-based one.

When Google created UA, they made an architectural decision to build the whole data tracking model around the idea of a “session.” But in Google Analytics 4, that has changed completely. Now, the focus is on the concept of a “user” and then any number of associated “events.” Sessions are something users have to derive after the fact.

There are even separate events for things like pageviews or custom conversion actions. That means users will have to tag and implement all of those events manually with the new Google Analytics 4 tagging structure to center their whole tracking model around users and events.

Why are they switching to an events-based model? Pressure in the European Union (specifically GDPR) is speculated as a major reason. 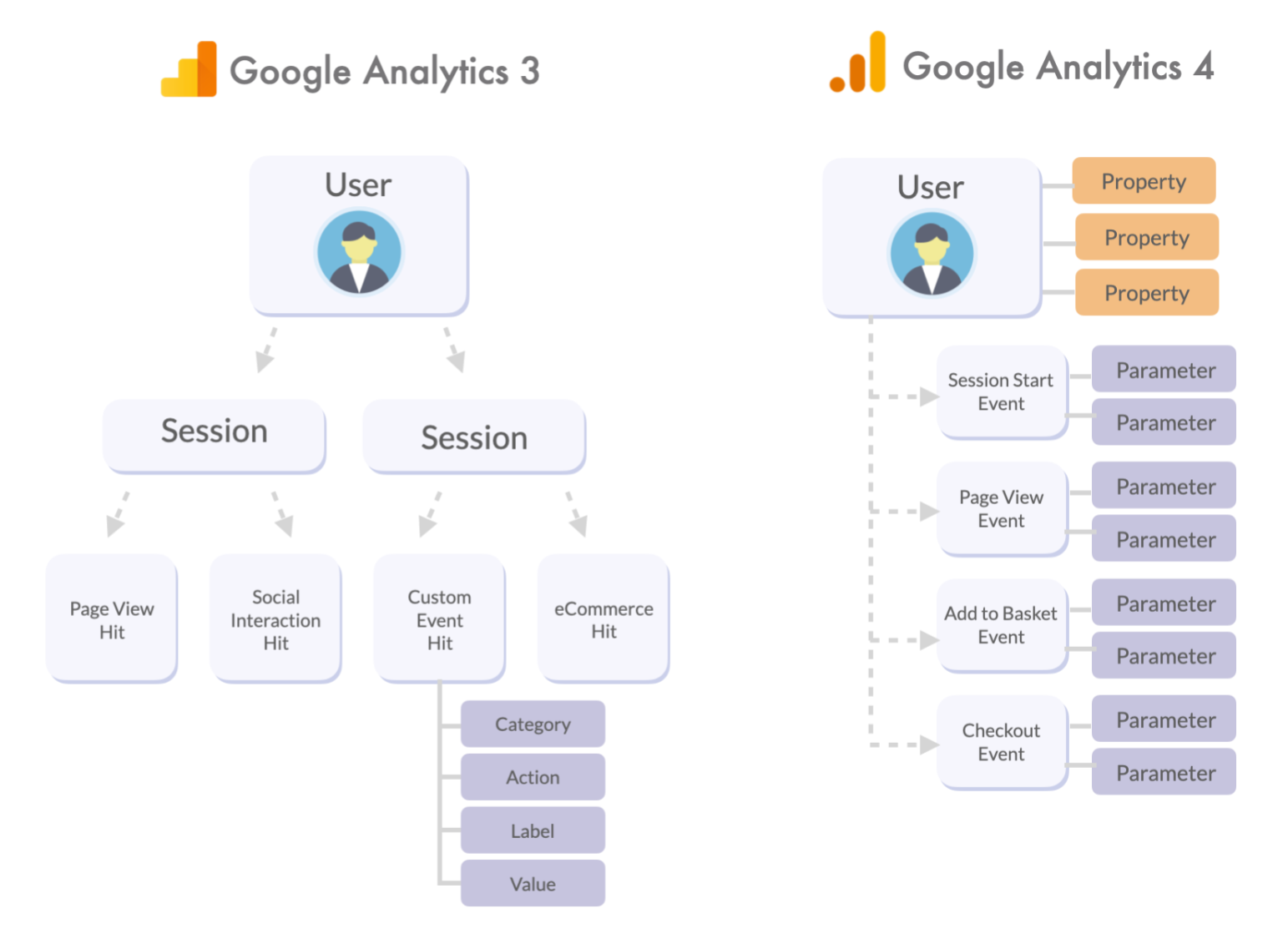 Due to this architectural shift to an event-based data model, rather than Users, Sessions, and Session Duration being the core metrics, Google Analytics 4 now focuses on Users, Events, and Engagement Time.

Consequently, the bounce rate metric is being retired in favor of engagement time—GA’s new measure of active audience engagement. Similar to Parse.ly’s engaged time metric (which our platform invented and has offered for years), engagement time aggregates the time users spend actively engaged with web pages.

Real-time tracking in Google Analytics 4 is extremely limited compared to UA’s—showing data from the “last 30 minutes” at best. There is no focus on real-time reports or APIs in Google Analytics 4, so users will have to build that functionality themselves atop BigQuery and PubSub in Google Cloud.

iOS and Android tracking is supported in Google Analytics 4 via a new feature called Data Streams. It leverages Google’s dedicated mobile development platform, Firebase, which they have rebranded as Google Analytics for Firebase.

The new event-based data model in Google Analytics 4 and the required reimplementation is forcing users to rely even more on Google Tag Manager (GTM) to manage their tags. Here’s more information on tagging your site for Google Analytics 4 with GTM.

Common challenges with Google Analytics 4 and the required migration

The sunsetting of UA and the forced migration to Google Analytics 4 is causing major headaches for GA users and implementers.

Extensive reimplementation is required to set up Google Analytics 4

Getting Google Analytics 4 set up requires a lot of extra work because of the architectural changes. For example, a pageview event is not automatically labeled as a pageview event. It would be a generic event that users must tag manually as a pageview. 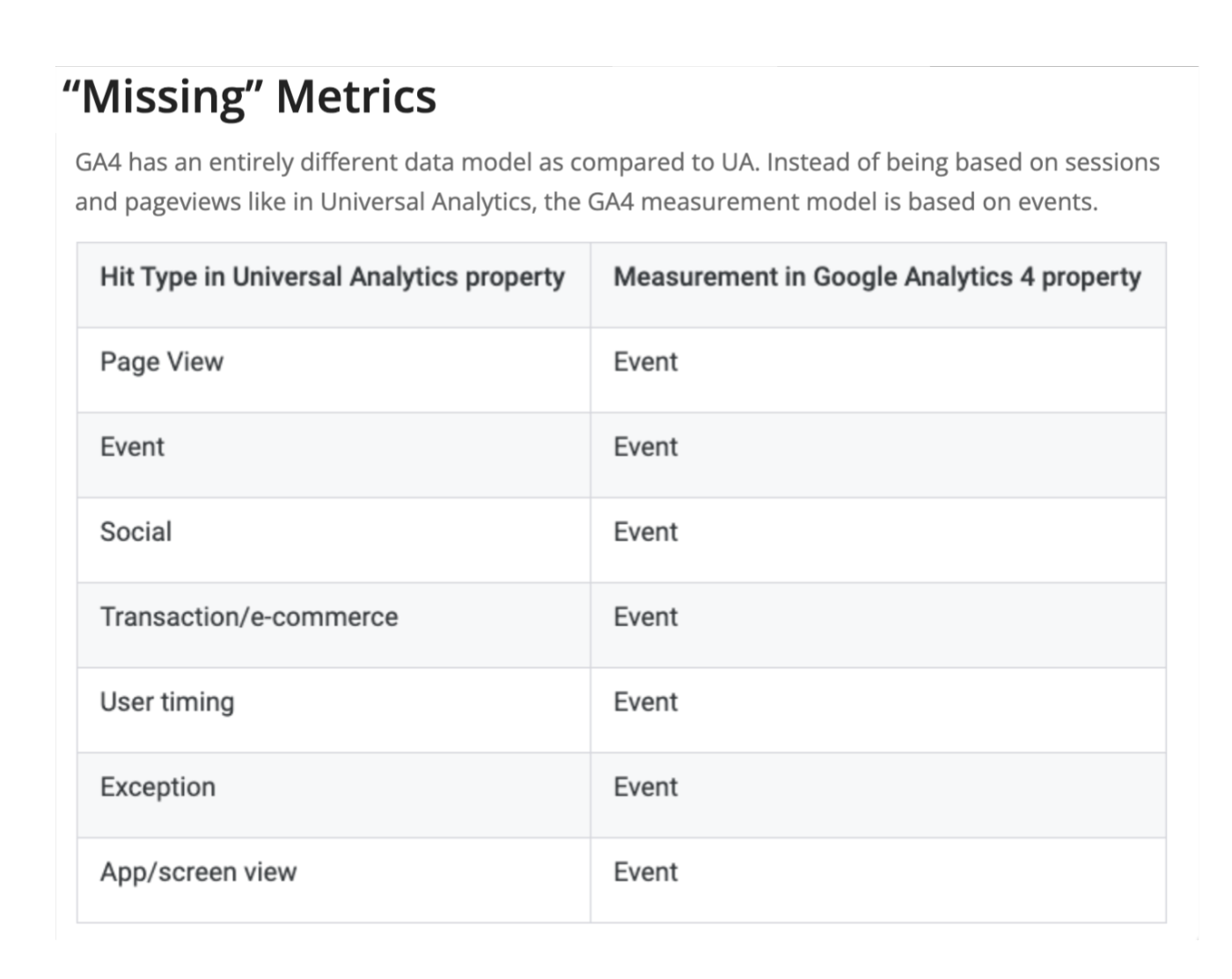 With Google Analytics 4, it takes a lot of thought and effort to set up a site to measure meaningful things. And to do that consistently over time, maintenance becomes an important but time-consuming requirement. Google Analytics 4 users will be forced to dual tag and retag their sites, reimplement all conversion events, and redo all reports, API integrations, and SQL integrations.

The shift from a session-based to an event-based data model in Google Analytics 4 also means that users lose access to all of their historical reports and data along with everything else they had in GA3—even things like API integrations (Slack, Google Sheet, etc.) and Backend SQL-based queries.

Even if they dual-tag soon, Google Analytics 4 users won’t be able to access data from more than a year ago. As Google Analytics 4 is an entirely new product with different architecture, users can’t import UA historical data because the data tables don’t connect to each other.

This is problematic because readership is highly impacted by seasonality. For example, the holiday season has entirely different patterns and trends compared to the beginning of summer. Being able to compare apples-to-apples with robust historical data is necessary for accurately benchmarking your content performance. Not having that type of historical data is creating a major blind spot for content teams.

But there is good news.

Parse.ly’s architecture has always been user- and event-oriented, so GA users who also use Parse.ly and whose sites are dual tagged between GA and Parse.ly can cross-reference their events with Parse.ly to save time and ensure accuracy. Not to mention, Parse.ly is incredibly fast and easy to set up, so you can start tracking right away.

AMP is not supported

Not every site is using AMP, but many are and it can account for a significant percentage of traffic, especially search traffic. Losing visibility into that audience is creating another major blind spot for many publishers and, of course, that can have detrimental effects.

Making decisions based on partial understandings of your audience and how they’re engaging with your digital products can easily lead you in the wrong direction.

Data in and of itself is not valuable. What’s valuable is having data that is accessible to a broad number of people that need it to inform decisions they’re making on a day-to-day or strategic basis. The person generating the insight and acting on it should ideally be the same—that’s how Parse.ly is oriented.

The architectural changes with Google Analytics 4 and the shift of focus away from sessions and pageviews not only creates a ton of work for implementers and end users, but it also moves Google Analytics 4 even farther away from being a valuable solution for content professionals.

Getting GA set up correctly to display data in user-friendly views was never easy, but Google Analytics 4 is even less user-friendly for teams at content-focused organizations. 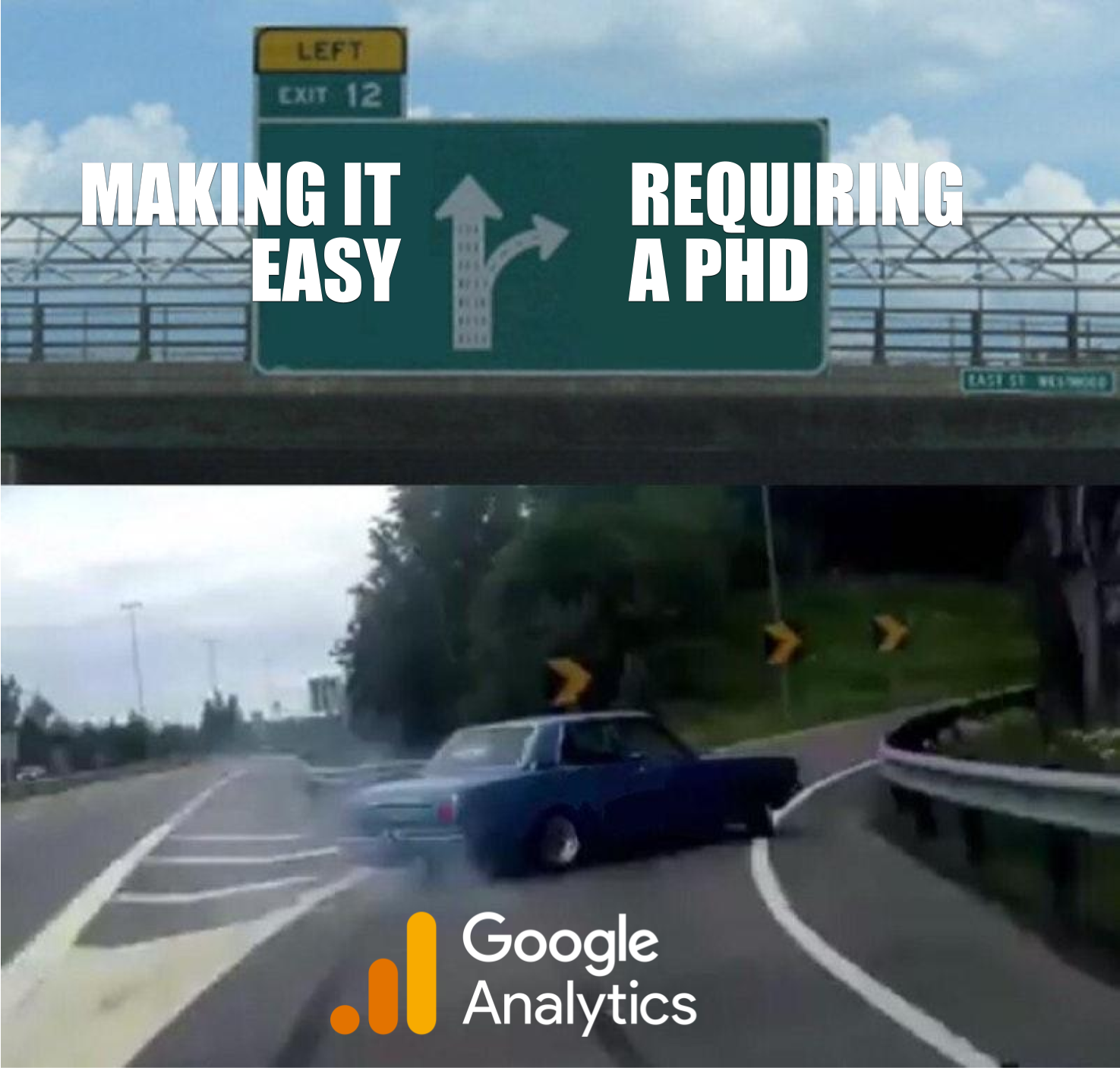 This is a marker of where Google is focusing their time and energy, and what segments of the market they’re valuing. Right now, it’s clear they’re not building products for publishers, content marketers, and people who are engaging with content and audiences on a daily basis.

Should I use Google Analytics 4? Our take

Don’t get rid of Google Analytics if you’re comfortable with it. But it can’t be your be-all and end-all of day-to-day reporting and actions onsite.

Your data scientists will still use Google Analytics 4 to collect data and then send it into their BI tools (Big Query, for example). And it’s still great as a commodity provider for third-party integrations on your marketing programs around AdWords. Just remember that you’ll be missing a unified view around content, audience, and conversion.

Parse.ly is great for content analytics and providing that unified view. With Parse.ly, you’re equipping content creators with a tool they can understand and use themselves—instead of having to ask for help from an analyst and waiting a few weeks to get it.

You’ll also get stronger day-to-day reporting, real-time reporting, CMS integrations, and APIs. Also, Parse.ly will be the only tool where you have 1/2/3+ years of historical content analytics data in one place. 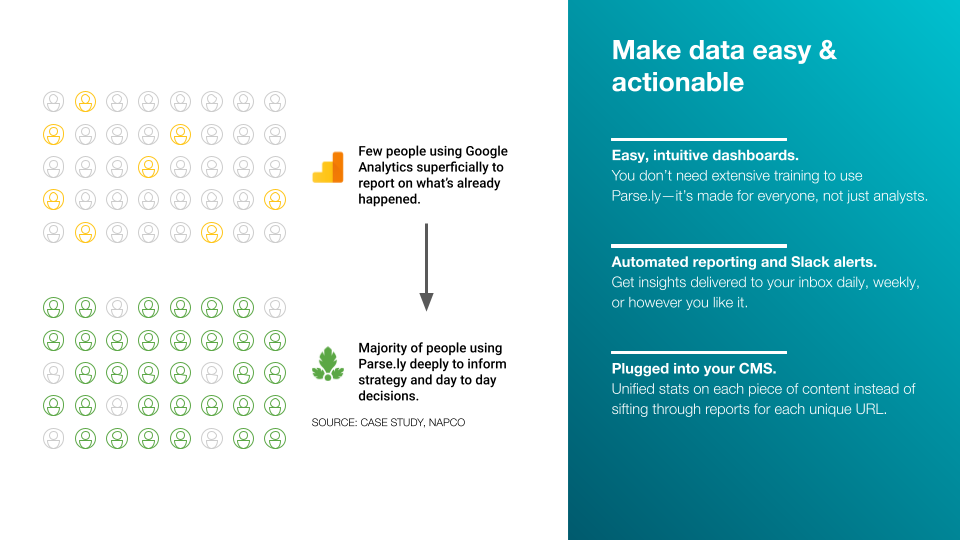 Parse.ly is a SaaS vendor serving customers directly, whereas Google is treating Google Analytics 4 as a “loss leader” for other businesses like AdWords and Google Cloud. They want your web data for free so they can make money with it in other ways.

Want to learn more about how Parse.ly is making life easier, not harder, for content marketers and publishers?