Google adopting the strategies that made Facebook successful in news referrals

Facebook’s News Feed, when it first rolled out, allowed for a news and information discovery mechanism that hadn’t been seen, at scale, before. Most stories about Facebook’s News Feed change, and the associated drop in traffic it sends off platform, have focused on the decline in Facebook traffic.

While everyone craned their necks to watch that crash (and maybe avoided getting tangled in the wreckage), Google has been rolling out discovery options of its own. In addition to search and news, a new category of Google traffic has joined the top ten referrers to the Parse.ly network, bringing in 1.4% of traffic, more than Pinterest, LinkedIn, Instagram, or Flipboard.

I first noticed this when I saw some fast climbing traffic pop up while exploring our network referral data. As head of Audience Development Solutions, Parse.ly’s new consulting team, I help our media clients understand how they compare to their competitive set or find under-utilized referral sources that could signal an untapped audience.

Content discovery on Google platforms had exploded. Referrals from a source called “googleapis” and from Google Play Newsstand are on the rise. 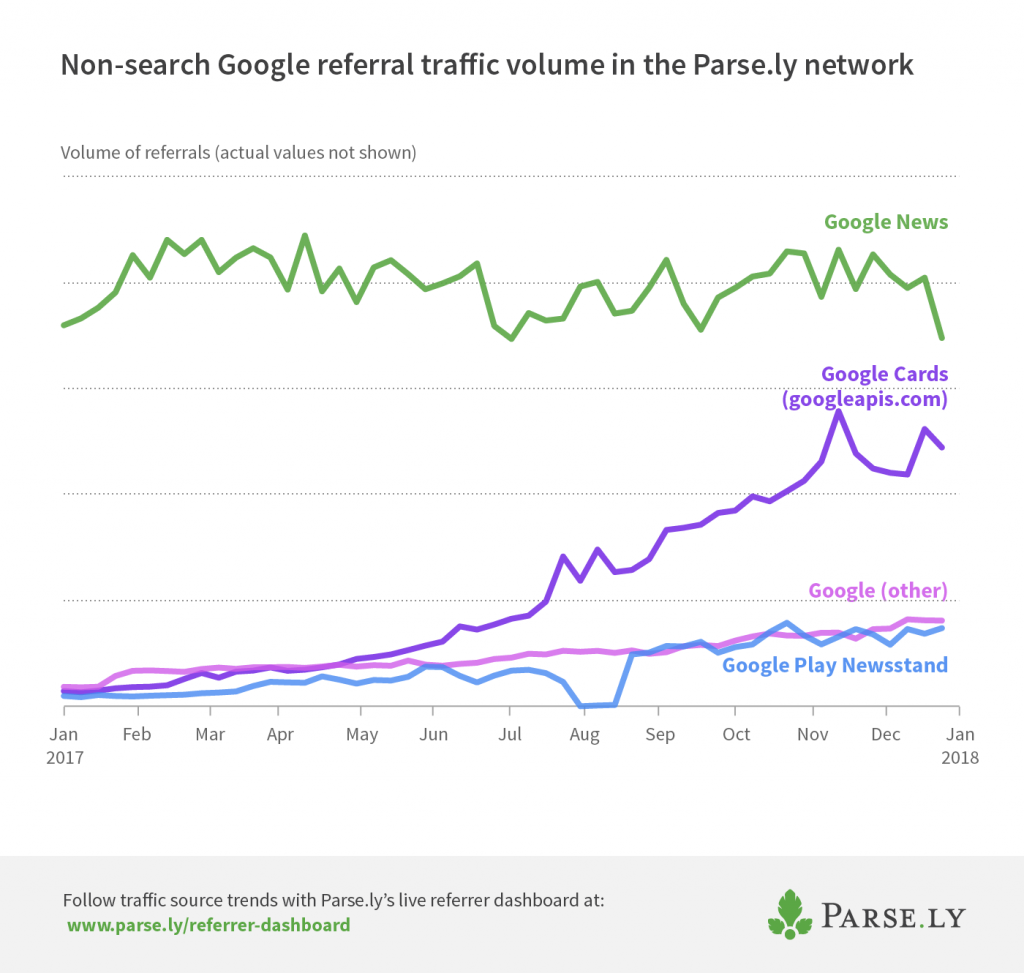 Google has clearly decided to invest in content discovery, an area that every publisher should take note of.

What is googleapis? Introducing Google cards

Traffic from the referral source “googleapis” increased 1200% during 2017, and is the quickest growing referral source in what can broadly be categorized as a group of “other” Google traffic, or all non-search traffic, to our network.

This traffic almost entirely comes from mobile Android users, and while the Google iOS app has cards, they don’t appear to track as googleapi referrals in the same way. While content discovery controlled by Google leaves little room for control on the side of the publisher, there are some things to note.

Clearly, Google has invested in not only content discovery as a concept, but has prioritized it as part of their design in software and in their hardware strategy (see: homescreens on Google Pixels). Connecting their users to information that matters to them through content discovery benefits both Google as a company, and hopefully the companies that create the content. Unlike Facebook, this alignment doesn’t rely on likes or shares of fellow users; it simply relies on people choosing over time what they want to pay attention to while on their phone.

With speculation circulating around whether Google favored AMP-enabled content, I wondered if AMP played a role if articles were picked or not for Google cards content. Officially, Google only says that mobile site speed should be considered for better search ranking, and while your site must have AMP to be featured in the search carousel, it does not have to be AMP enabled to be featured in cards. In fact, we saw referrals from Google cards that were not AMP rise at the same rate as those that were AMP-enabled. 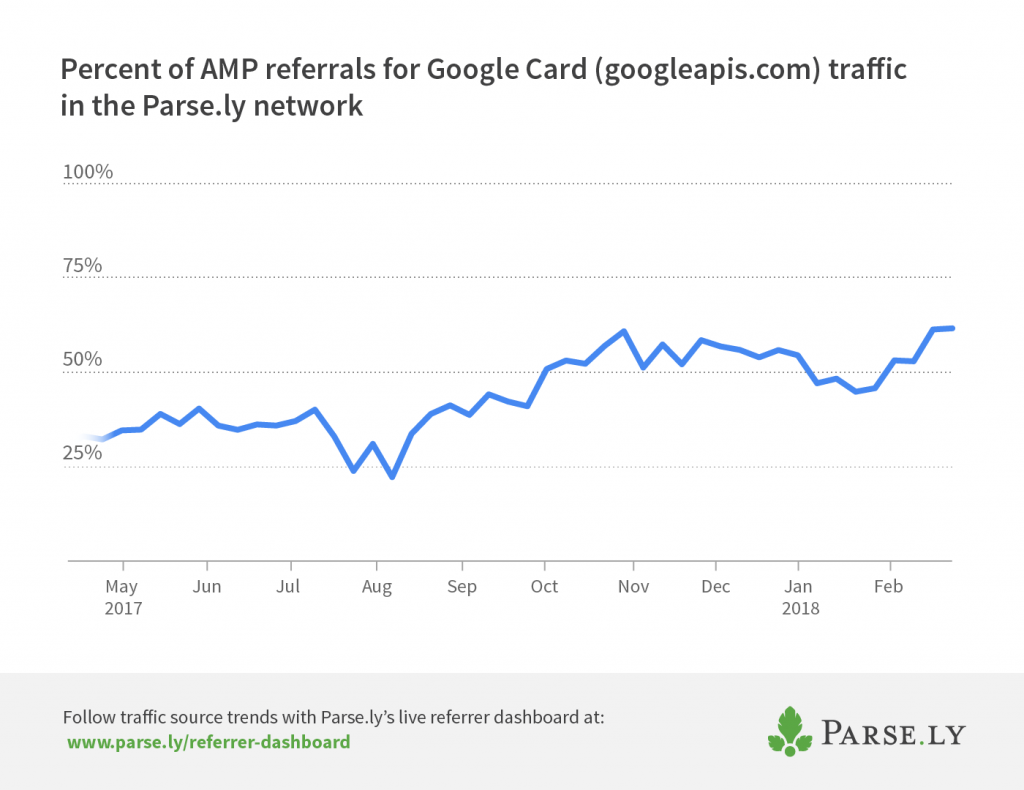 So, should you integrate AMP into your site? Keep in mind that AMP affects more than just search ranking. As Moz advises:

“We know that fast-loading websites are better for the user. But what you may not be aware of is how speed can impact the bottom line. Google-sponsored research shows that AMP leads to an average of a 2X increase in time spent on page.”

At the end of 2016, Google redesigned Google Play Newsstand, its news reading app, “to better compete with competitors like Apple News and Flipboard.” The main tab features “a personalized briefing and an AI-powered recommendation stream” that enables quick identification of top stories as well as the ability to dive deeper into interesting topics. Over the course of 2017, traffic from Google Play Newsstand increased.

Traffic from Google News has remained steady across our entire network, regardless of any rise and fall in AMP- or googleapis-related traffic. This steadiness in and of itself is what makes Google News a noteworthy traffic source.

The Android Gmail app is the biggest contributor to “other” traffic from Google. The second biggest “other” source is Google ads. The Google system is big enough that we suspect some residual traffic from sites like Google Docs and Google Trends fed into this “other” category, too.

Other questions to explore

Over the course of the past year and a half or so, we’ve seen a lot of developments from Google that could have factored in to referral traffic trends. In addition to incorporating directly into Android devices, Google is doubling down on iOS support in other ways:

What else will 2018 bring? I’m planning to keep my eye on how tried-and-true SEO practices play out in the Google content discovery ecosystem, how AMP vs. non-AMP referrals actually play out in the long run, and Google’s efforts regarding iOS support.