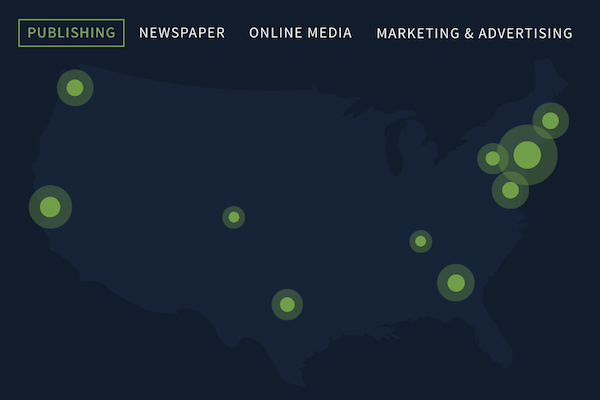 A slew of advice on diluting filter bubbles followed the 2016 election. Quartz advised, “Get new perspectives in your inbox.” One way to do that, Quora suggested in this discussion, was to “[i]ntentionally seek out people in different geographies, from different backgrounds with different views.” The clustering of similar viewpoints wasn’t only occurring online; media bubbles are also rooted in geography.

It turns out readers of news aren’t the only people in a geographical bubble; creators are, too. We partnered with Ceros and used data from the LinkedIn Workforce Report, LinkedIn’s job search, and a wide media network to understand trends and patterns in the digital media job market. Searching industry and city keywords on LinkedIn in ten major cities (determined by data from the Workforce Report) highlighted the disproportionate percentage of digital media and journalism jobs clustered on the coasts:

Even as we’re aware of media bubbles, many of us—journalists, media professionals, the team in the New York office here at Parse.ly—are still in them. Some, though, are acting on that awareness and finding ways to extend beyond the geographical confines of the industry.

Digital Publishing Jobs are Clustered on the Coasts

Of the ten cities we researched on LinkedIn, New York City had the highest percentage of job opportunities in four industry categories: online media (25.21 percent), publishing (12.70 percent), newspapers (8.27 percent), and marketing and advertising (7.58 percent). After New York, next on the list came Boston and San Francisco, which each represented a notable percentage of publishing and online media jobs. For newspaper jobs, Atlanta and Seattle took second and third place.

In the May/June 2017 issue of Politico Magazine, Jack Shafer and Tucker Doherty analyzed labor statistics, voting patterns, and Census data to answer the question, “Where do journalists work, and how much has that changed in recent years?” They also found journalism and digital publishing jobs fall into specific regions:

“Where newspaper jobs are spread nationwide, internet jobs are not: Today, 73 percent of all internet publishing jobs are concentrated in either the Boston-New York-Washington-Richmond corridor or the West Coast crescent that runs from Seattle to San Diego and on to Phoenix. The Chicagoland area, a traditional media center, captures 5 percent of the jobs, with a paltry 22 percent going to the rest of the country.”

Newspaper jobs are more spread out across the country, but the availability of these jobs is decreasing, Shafer and Doherty report. On the other hand, internet publishing and broadcasting jobs are on the rise. 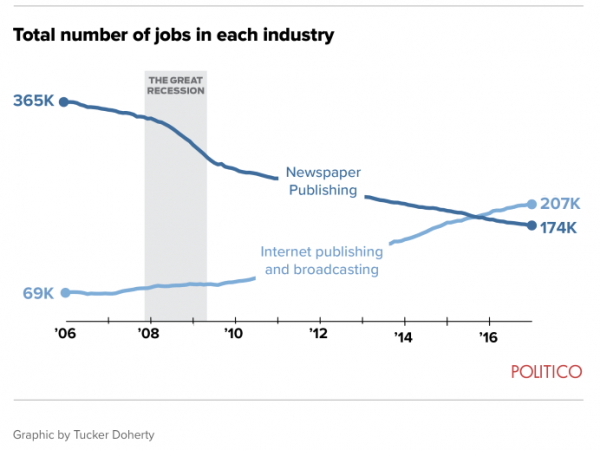 Trends in newspaper publishing vs. internet publishing and broadcasting, via Politico.

Why do these coastal hubs exist? Theoretically, with the advent of the internet and remote work, you’d expect the bubbles to dilute, but Shafer and Doherty explain that economics are to blame: “specialized industries like to cluster.”

How Journalists are Going Beyond Media Bubbles

The attention drawn to media bubbles has encouraged journalists and organizations to consider how they report on local communities, with a pronounced focus on audience engagement.

HuffPost announced a plan for a seven-week bus tour to cities like Fort Wayne, IN, Oxford, MS, and Odessa, TX. Editor-in-chief Lydia Polgreen said the project was inspired by wanting to “hear from people about the things that mattered most to them rather than us deciding from our office in the East Village what are the stories that are most important to Americans.” At each stop on the tour, HuffPost will work with local media outlets to report on the communities.

Boston is one of the cities with a high concentration of media jobs, but that doesn’t guarantee every community is equally represented in the media. NiemanLab shared the story of one journalist, Jorge Caraballo Cordovez, who used a unique form of engagement to report on gentrification in East Boston. By handing out postcards, Caraballo was able to tell the story of the community while simultaneously providing actionable information. “It’s advocacy and it’s journalism,” he said.

In an effort to highlight local media, we’ve been reporting on the reporting that happens in the communities our remote employees live in, including Boulder, CO  and Austin, TX.

There are so many complex factors influencing media bubbles, including geography, politics, and diversity, that confronting the issue is daunting. Not only does data help us understand how these bubbles form, but it indicates where we can focus our attention—and what we might need to change about ourselves—to solve them.