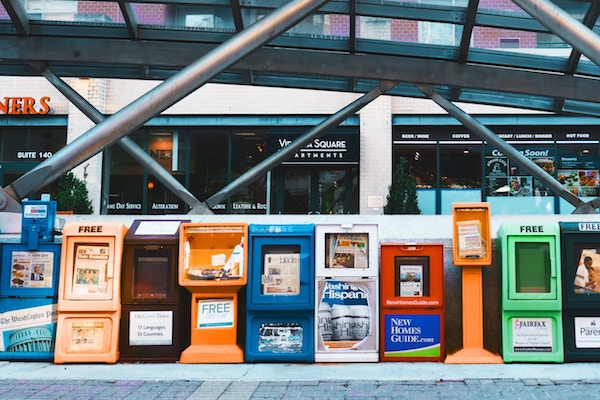 The scramble to diversify traffic sources picked up after Facebook announced its algorithm change earlier this year. While brands and publishers are focusing more on decreasing their reliance on a single platform like Facebook or Google, platforms are only half of the picture—literally.

Search and social drive a combined 50% of traffic to our network, meaning homepages, internal recirculation, email, direct messaging apps, and other sources account for half of the traffic to articles. 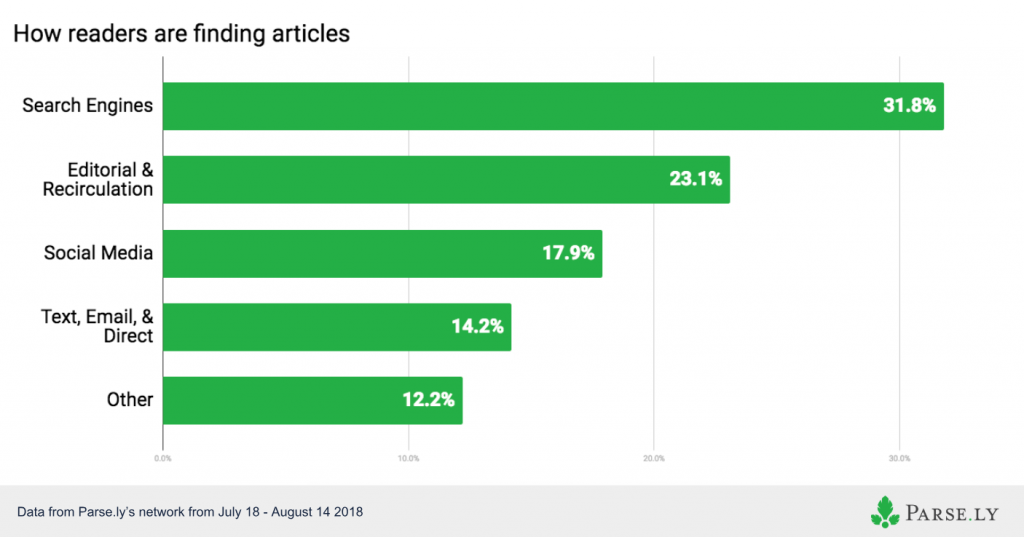 How readers are finding articles. 50% of traffic comes from sources outside of search and social. (Currents data, July 18 – August 14 2018)

Homepages, section pages, and other editorial promotion (which we refer to as Editorial & Recirculation) alone send more traffic than social media. Even so, platforms and external referral traffic still dominate the conversation. There’s diversification potential in focusing on homepage, email, and other traffic in addition to search and social, as publishers like The New York Times have demonstrated through newsletter and subscription programs.

The most pertinent finding in all of this? The homepage matters and so do direct communication channels, especially when it comes to politics.

Twice as many views to articles about Donald Trump came from articles found on homepages or read after a previous article than came from social media and search during the time frame we studied.

Some categories with high editorial referrals, like Sports, Tech, and Health, saw more traffic from either search or social. But homepages, section pages, and internal recirculation were particularly critical for Law, Government, and Politics content. Editorial & Recirculation sent over 152 million views to Law, Government, and Politics news, surpassing social media and nearly doubling the views from search. According to Google Trends, many people simply used Google to do branded searches: looking for a quick way to get to their trusted news sources for updates.

On average mobile traffic dominates with 63% of all traffic, but nearly half of Editorial & Recirculation traffic is on desktop.

That doesn’t mean homepage readers are all sitting at their desks, though; tablets also over-indexed on editorial and recirculation.

Maybe this has to do with when people are navigating to homepages, on tablets in their leisure time or at their desktop during work. Maybe it indicates there’s a market for strong visuals and photojournalism viewed on bigger screens. This isn’t to say mobile optimization isn’t important, more that desktop and tablet need to be considered, too. An analysis of individual sites’ readerships could help shed light on the why and how to reach these readers across devices, but the what holds true either way: homepages matter.

There’s a sweet spot with inboxes and lifestyle content that more publishers might be able to capitalize on. Health & Fitness, Food, Arts & Entertainment, and Travel are all categories seeing significant direct traffic.

That being said, Trump is still the top topic and Law, Government, and Politics is the top category with referrals from direct sources. This highlights another aspect of why text and email appeal to readers: it’s a way to share and discuss sensitive topics.

People read about Trump through text, email, and direct nearly as often as they do through social media. This resonates with a finding from a “Trump fatigue” analysis HuffPost conducted: people are more apt to read news about Trump than they are to share it.

News about the president can be divisive. Some people might be more inclined to send a link to a relative, friend, or small group via text or email rather than posting it on social feeds, either to protect points of view or communicate in a “safe” environment. Not only is email a vehicle for publishers to connect readers with personalized, curated content, but it’s a way for readers to discuss potentially sensitive topics within trusted circles.

What about the rest? “Other” traffic sources

In our network, we qualify “other” traffic as page views from RSS feeds, apps, and websites that aren’t search engines or social media. Of the five categories of referrals, other sources send the least amount of traffic. That being said, this category still has a significant 12% of referrals. We’ll look at more of this in future posts.

Drawing on internal and external sources

A healthy traffic diversification program doesn’t just involve cultivating audiences on multiple platforms. It also means connecting readers with the kinds of content they want to share with their group text, start their morning with, or read in the context of the day’s news. Especially in this current news cycle dominated by politics, it’s about delivering stories within trusted spaces, whether that means the homepage or a text message or an email.

And the big upside of this overlooked 50% of attention? It’s focused on owned and operated channels, putting power back into the hands of publishers.