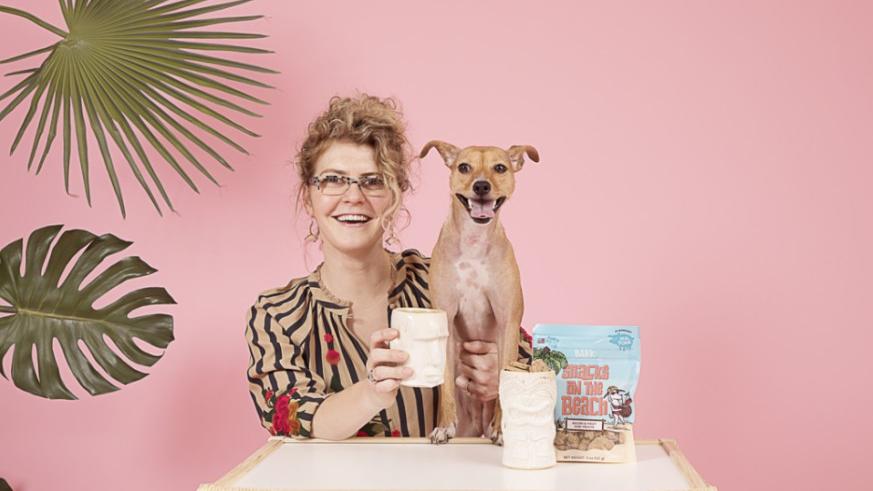 Chewarrasic Bark. The Good The Bad and The Pugly. Sniffin’ Safari.

These are just a handful of the pawtastic puns you’ll find in the land of BARK, inhabited by the self-described “crazy dog people” who create BarkBox (the dog toys and treats subscription service), BarkShop (online shopping for more doggie goods), and BarkBuddy (like Tinder but for finding “fluffy singles,” aka adoptable dogs that need a home).

With content at the core of their business model, the New York company has grown substantially since their humble 2012 beginnings. Since then, BarkBox has shipped more than 50 million clever toys and healthy treats to customers around the world.

What sets BARK apart from the competition? A thoughtful, friendly, quirky voice that begins the moment you visit their site, sign up for their Pupdates email, or download the BarkBuddy app. In other words, they’ll have you at “Bone jour!” and they’ll continue to win over dog lovers everywhere with heartfelt, humorous stories that make their furry best friends the star of the show.

A slice of the BarkBox welcome email

Bark’s content producers and toy designers collaborate to churn out entertaining stories in a box and on the Internet—surprising and delighting customers on the regular. It probably goes without saying that their content marketing is inspired by Bark’s undying love of canines. “BarkBox isn’t just a box of stuff—this is a moment for dogs and their family to connect,” says Stacie Grissom, BARK’s Head of Content, who describes her job as “workin’ for the dog.” “We try to create content that sticks to your bones a bit more than just social memes and social videos. Our goal for BarkBox is to create a really entertaining experience.”

Stacie Grissom with her dog Pimm

In a nutshell, BARK’s content strategy starts with a compelling narrative, and their toy designers create a collection of treats and toys to support that story. The story then extends to all of its supporting marketing channels: barkbox.com, social (Instagram and Facebook @barkbox), and apps. After fully realizing the effectiveness of the overarching story approach, in recent months, Bark has put more muscle behind the character development that makes dogs (aka the “real customer”) the star. Case in point: The Invasion of the Space Squirrels. Here’s the copy: Gadzooks! Your dog barked at them, chased them, but now they’re here! SPACE SQUIRRELS ARE INVADING PLANET EARTH, and only YOUR DOG can save us! Use this BarkBox to equip your Star-Pup and SAVE THE WORLD! 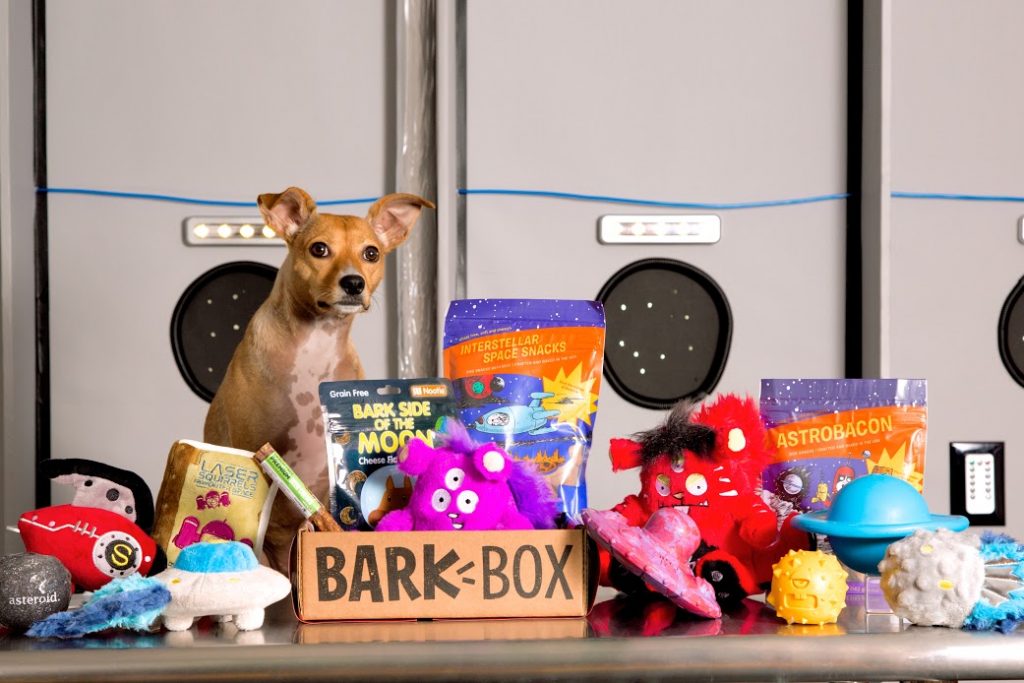 Pimm and the Invasion of the Space Squirrels! BarkBox

Launched in August 2017, Invasion of the Space Squirrels is one of the most popular BarkBoxes to date in terms of sales, web traffic, and engagement. Compared to BarkBoxes past, The Invasion of the Space Squirrels BarkBox “was the first time we decided the principle is about the dog being the star, and the characters were the nemesis of the dog,” Stacie says, adding that it was also the first time they sent SMS text adventures in the box. All of the variations of the toys included a squirrel, and the whole writing staff worked from the same plot line. 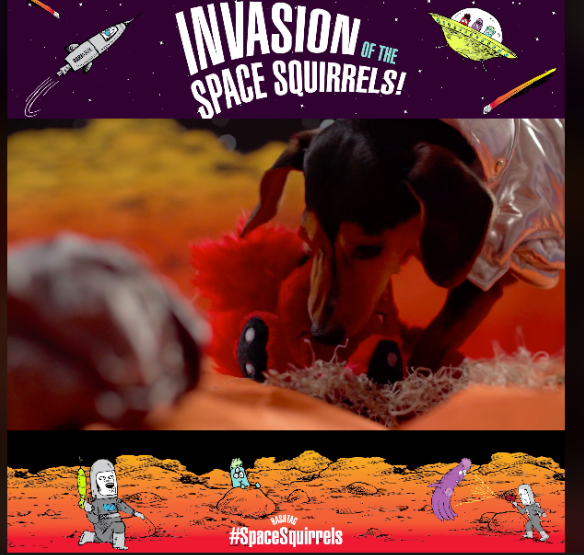 An Invasion of the Space Squirrels! BarkBox Facebook video

Stacie joined Bark during the company’s pioneering days—then, as the editor of the now-defunct BarkPost blog—and now manages a team of comedians, writers, and social media folks. Grissom’s team conceptualizes stories up to a year ahead of time. The Bark approach is a marriage of data-driven decision-making and sheer creativity. “We tend to pursue a lot of things by thinking, ‘Wouldn’t it be cool if?'” she says.

Parse.ly: Why do you create content?
Stacie Grissom of BarkBox: Our philosophy as a company has always been that we’re not the party promoters—we are the DJs at the party. We’re responsible for creating the atmosphere that makes customers want to participate in the peripheral conversations rooted around our product. We create content to start the conversation with people and to have a conversation that’s not about products.

What is your biggest challenge in hitting your goals?
We’re at a time in history where content and the way people communicate is fracturing and fragmenting. Things are just more diverse, and you need to be everywhere, but you also only have so many people and so much budget to accomplish that. It’s about figuring out priorities and where your time is best spent creating content to make sure you’re going to see return on investment instead of doing everything everywhere, because that’s impossible.

How do you know when your content is effective?
That’s one of the things that’s trickier to determine, because as you fragment both on platform and other mediums, it becomes a bit of a math puzzle to report on each week. Generally, we consider something to be very successful when it makes a huge splash. One of our most successful projects in the past year was music videos—they were these dog mom raps that we wrote, filmed, and recorded. The first video got 40 million views, the holiday one is at 15 million views. 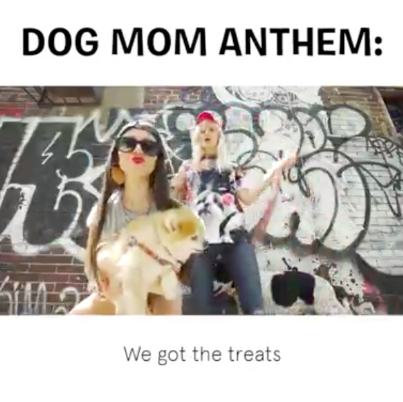 One of BarkBox’s Dog Mom videos

You recently changed your hashtag strategy. You used to create specific hashtags for each month’s theme, but now you’ve streamlined and consistently use #BarkBoxDay to as a way to celebrate the day that customers receive their BarkBoxes. Why did you change the strategy?
Switching to just using #BarkBoxDay helped to solidify things and helped us direct our strategy into an actual goal. My team is responsible for getting more engagement around #BarkBoxDay. With the individual theme tags, it was like, “Isn’t this hashtag neat?” A year ago, the average on BarkBox Day was 4,000 uploads per month; but when we decided not to use specific hashtags for the unique BarkBoxes and just use #BarkBoxDay, we’ve increased to as high as 11,000 uploads in one month.

Another one of our goals is increasing the amount of people who participate in #BarkBoxDay month over month. We’ll have a baseline and then track that based on the ratio of new engagements versus how many customers we have. It’s a lot of gut too. We’ll do things because we have faith in them and we think that they’re really cool and sometimes that works and sometimes that doesn’t, but that’s part of historically why we’ve been successful. We maintain that flexibility around testing and innovation and strategically throwing spaghetti against the wall and seeing if the whole bowl sticks or only a few noodles stick.

How often do you evaluate a piece of content?
Every other day. We have people who are responsible for each of the channels and properties that we run. Each week that person is responsible for reporting back on how the week went. It’s less talking about “Oh, we grew by 10,000 new likes on the page.” We don’t really care about that. The reporting is more to serve as a distillation and a digestion of what happened and how the audience reacts to different things so that we are better prepared to create those explosive things in the future.

Are there any questions that you have about your audience or your content that you wish you could answer?
We don’t have great systems for collecting that data at scale and to be able to dig into it and make predictions or assumptions out of it. We could send a survey to people and we’d get obscene amounts of responses on it, but we just don’t have a way to organize it all. The people who are able to do that are more focused on retention and more things that are more closely tied to more immediate business goals.

How many comedians and writers do you work with?
My team is about 5-10 people, and we’re getting ready to hire again. Together, we create all the content for product copy, public storytelling, social media, and videos.

The comedians live in New York; a lot of them are actors and have other projects on the side. On my team, if you don’t have a funny bone, you’re not going to mesh well with the group. All the writers have a background in copywriting—whether you were in writer’s room or TV show or actually did stand-up. A lot of the Barkbox employees have a strong sense of humor—it’s imperative to work here.