Fresh Analytics Perspectives from Journalism Students You Should Hire

Home » Fresh Analytics Perspectives from Journalism Students You Should Hire 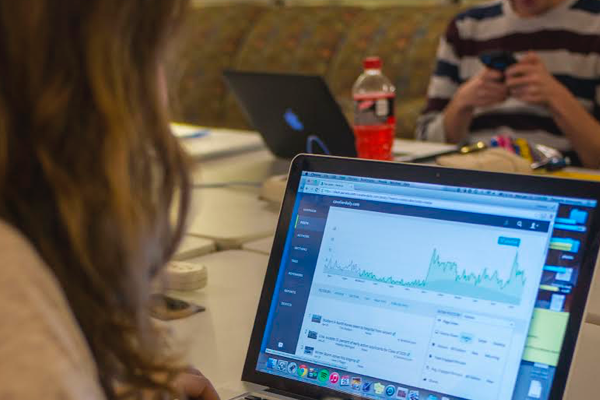 Journalists today work in data-driven newsrooms, incorporating analytics into their reporting and editorial strategy. Not only have journalism students at universities across the country acknowledged the importance of understanding data analytics as they prepare to enter the workforce, but they’ve already started integrating data analytics into the foundations of their collegiate newspapers and journalism courses.

As a part of our University Partnerships Program, we’ve had a chance to learn from students at universities across the country who used the Parse.ly dashboard in their newsrooms and classrooms. This next generation of journalism students who have never experienced news without the internet now gets to try their hand at using analytics to shape their editorial goals.

Read on to learn how students at The University of Virginia, Texas Christian University, and Michigan State University used data to inform their approaches to digital publishing.

Like many newsrooms across the country, the staff of The Pioneer at The University of Virginia wanted to build a publishing strategy after they started tracking the performance of posts. With the goal in mind of getting their name out to both the University community and the local Charlottesville community, they looked specifically at how different referral traffic affected the audience.

Data demonstrated that The Pioneer audience discovered videos and articles primarily through Facebook. The staff responded by boosting more of their Facebook posts. Membership Coordinator Natalie Browning explains, “We started boosting our posts on Facebook more, which was a very small decision to make, and I think it made a pretty huge difference.”

Analytics enabled The Pioneer staff to make informed decisions and also highlighted the larger importance of using data in newsrooms. Director Catherine Cura says, “I think it’s important that we’re teaching our producers how to use data analytics just because it is becoming such a huge part of what a publication is. It’s important to be well-rounded and it’s important to know how your publication runs, and, especially if we’re trying to make really efficient producers, we want them to know how things work behind the scenes.”

Watch The Pioneer‘s staff talk about what they learned:

The State News at Michigan State University wanted to think differently about how to use metrics when it came to their audience. So they looked at what went wrong with their stories.

Each week, the newsroom pulled custom reports detailing both the most and least popular posts. By reviewing the least popular posts, the staff aimed to identify why the posts performed how they did and seek to improve on those aspects in the future.

The staff realized that many were published on Fridays, a day that their traffic is typically low. Data helped them reschedule the posts. Connecting the data with what the reporters knew about readers’ habits made for more article exposure.

In addition to influencing strategy, exposure to reports acted as a more general learning experience for students. State News Editorial Advisor Robert Hendricks says, “I know too that giving the students an opportunity to use a professional level product will help them as they are looking for jobs after graduation.”

Many students enrolled in the Reporting course at the Texas Christian University Department of Journalism had never used a data analytics platform before. The students recount that they were initially skeptical about the assignment and the usefulness of analytics for journalism.

However, by the end of the course, students had used data to refine their approaches to evergreen content, social media strategy, and more, establishing a guide for future reporting students.

One example? The students used data to adjust the frequency of when they posted to their news site and garner more consistent traffic.

Traffic to the news website varied greatly from month to month. Taking a closer look at data from week to week revealed a correlation between the number of visitors and the number of new posts. From there, the students decided that they needed to publish posts more consistently in order to establish more consistent overall traffic.

Data U: Learn More about the University Partnerships Program

The results from The Pioneer, The State News, and the Reporting course at the Texas Christian University Department of Journalism are just a few examples of the many fascinating insights provided by program participants. Visit our University Partnerships Program page to explore the research papers, blog posts, videos, and testimonials describing how students used Parse.ly and what they discovered.

We’re excited to see what these journalism students go on to do in their careers! There’s no doubt these are the people you should be hiring for your newsroom.