Measuring the Impact of “The John Oliver Effect”

Home » Measuring the Impact of “The John Oliver Effect”

The reason many journalists get into the business is to create an impact with their work. But what about comedians?

Victor Luckerson, of TIME magazine, coined the term “The John Oliver Effect” in a January 2015 article referring to the impact that Comedian John Oliver’s show, Last Week Tonight with John Oliver, has made on various cultural issues.

He points to various segments of John Oliver’s show that have helped to make some kind of fundamental change in society:

At Parse.ly, we wondered if one of the reasons that John Oliver  has such a far-reaching impact in the real world is the amount of media coverage his show generates for the issues it covers. After he airs a show, do other media outlets pick up the topic in a way they wouldn’t have before?

To find out, we  looked to our network of nearly 400 digital publishers to see if we could find a relationship between the topics John Oliver covers and the media coverage of them. It turns out, there is.

We found that John Oliver’s influence is really notable for relatively unknown issues (like “chicken farmers” for instance) and a bit more muted for bigger issues like same-sex marriage.

But is the relationship specific to John Oliver?  Is it actually “The John Oliver Effect,” or would any popular show amplify awareness of these topical issues? To try to control for mainstream media effects,  we also looked at  topics featured on 60 Minutes and learned that Last Week Tonight’s impact on the digital news cycle is far beyond that of 60 Minutes’. 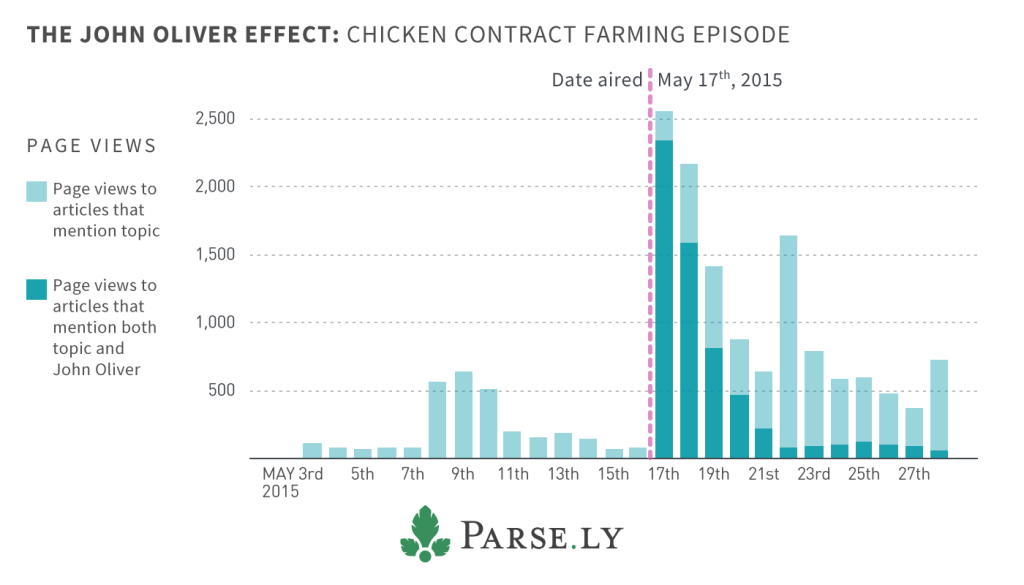 As you can see, Last Week Tonight’s  influence on page views decreases as the popularity of a topic increases (for the exact way we calculated this, see below). For obscure topics like chicken farming — almost no one is talking about the issue except in relation to John Oliver. However, when we look at a topic as hefty as torture, John Oliver’s impact diminishes a bit. With topics covered by 60 Minutes, for identical air dates, we found  almost no articles being read that specifically referenced the topic and the show.

Last Week Tonight consistently demonstrates a statistically significant effect on media coverage, while 60 Minutes does not — providing some valuable insight into how the digital media treats the two shows.

Does this mean that 60 Minutes has no impact on the digital news cycle? Given our methodology, it only means that the digital media isn’t citing 60 Minutes in its headlines. References to the show could be in the article text.

Given the cultural cachÃ© related to Last Week Tonight, reporters might be incentivized (in terms of page views, social sharing, etc.) to cite John Oliver in their headlines. Digital natives might be more likely to click on a  John Oliver-related headline vs. a 60 Minutes headline.

How We Did It: Methodology

For both Last Week Tonight and 60 Minutes we selected topics that each show covered  that had been relatively untouched by the rest of the media, so we could better isolate the show’s effects. Meaning, where possible, we wanted to look at the impact that these shows have on surfacing otherwise ignored topics.

For example: the June 7, 2015 episode of Last Week Tonight, covered  U.S. prison and bail system. For the June 7, 2015 episode of 60 Minutes, we looked at the show’s examination of the fraud characterizing relief payments from Hurricane Sandy. Both of these episodes featured other topics that were more widely covered in the media, including segments on pot in Colorado, Sepp Blatter, and Bradley Cooper.

Using keywords associated with the selected topics, we tallied the number of page views generated by articles with those keywords in their titles over a month-long period.

Additionally, we looked at the number of page views generated by articles with those topic-related keywords and “John Oliver” in their titles (i.e. “The One Important Fact John Oliver Got Wrong About Torture“). We did this in order to further isolate  articles that were directly related to the shows’ discussion of the topic.

For each show, we looked at the a month of data, 15 days prior to the show for comparison and 15 days following the airing. We saw that the impact could be discerned in the data within three days of airing.

A Harbinger of Impact?

The data serves as a useful indicator. Last Week Tonight with John Oliver likely has a greater impact on the news cycle, specifically the online news cycle, than a traditional network show like 60 Minutes, which has been around for almost 50 years. This has translated to a number of actual policy changes to the topics that John Oliver has  covered.

Now, is there anyone that still believes  John Oliver isn’t a real journalist?