Are audiences still reading about #MeToo, a year after Weinstein?

Home » Are audiences still reading about #MeToo, a year after Weinstein? 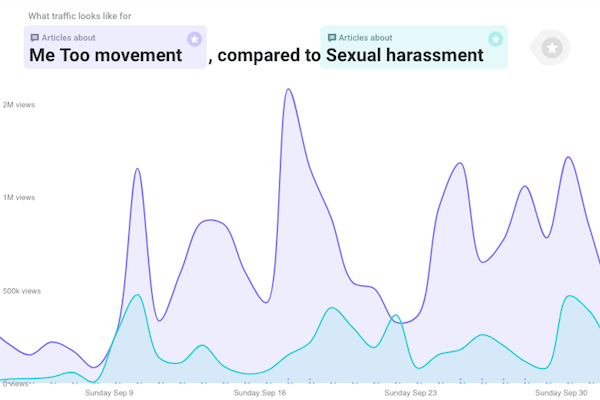 October marks a year since the reporting on Harvey Weinstein that earned The New York Times and The New Yorker a Pulitzer Prize. On October 5, 2017, Jodi Kantor and Megan Twohey broke their story, and on October 10th Ronan Farrow published his exposÃ©.

Farrow’s piece “From Aggressive Overtures to Sexual Assault: Harvey Weinstein’s Accusers Tell Their Stories” was the most engaging article, measured by engaged time, in our network. Average engaged time for The New Yorker story was nearly seven minutes; people spent more time with the article than 99% of the other content in our network.

One year later, does #MeToo still get that amount of attention from online audiences? We looked at what online attention looks like for the #MeToo movement today, including: Which stories are people paying attention to and how are they finding them? What other topics and themes get mentioned in stories about #MeToo and sexual harassment? 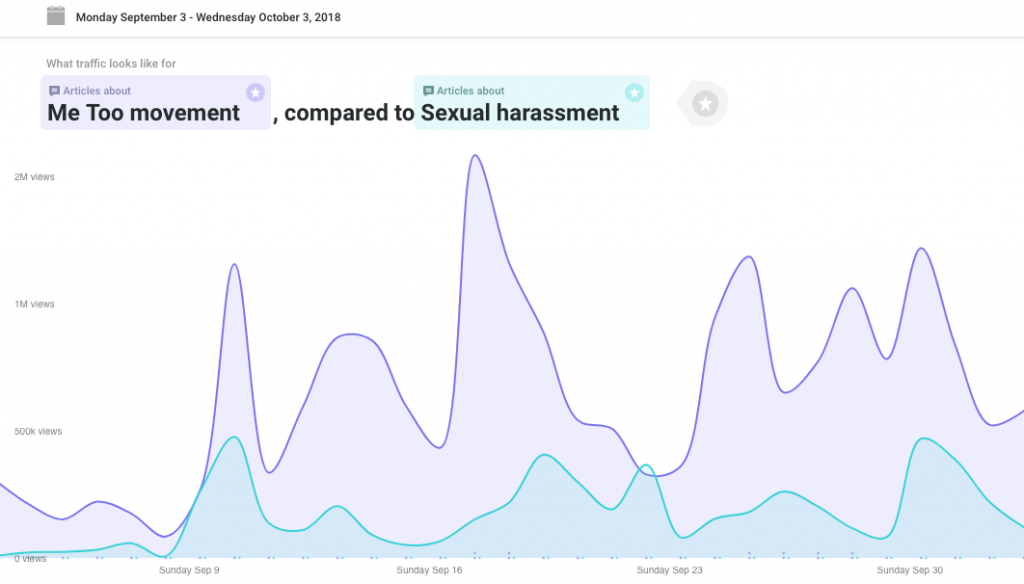 #MeToo stories get covered in the entertainment industry, sexual harassment in politics

Classifying and analyzing articles in our network using natural language processing, or    NLP, shows when the topics overlap and when they appear separately. When we compared attention data for “Me Too movement” and “sexual harassment” in Currents, sometimes sexual harassment and #MeToo are discussed in the same piece, but sometimes they’re written about in different contexts.

The top related categories indicate how outlets are covering each topic. Television (Arts & Entertainment) is the second highest related category for #MeToo, while it doesn’t appear at all on the list of related topics for sexual harassment.

#MeToo originated with accusations against a Hollywood producer and has continued to expose people in power in the entertainment industry. Time’s Up, an initiative launched by over 300 women in Hollywood to promote workplace gender equality, evolved out of the #MeToo movement. While #MeToo is more closely associated with the entertainment business, sexual harassment is being covered in the context of politics, legal issues, and news:

During the time frame we studied, the people at the center of the #MeToo stories with the most attention cover media executives and actors, whereas the top related stories for sexual harassment include politicians and businessmen.

While the top stories associated with #MeToo are concentrated in the entertainment industry, stories about sexual harassment cover a broader spectrum. The top story about sexual harassment falls under the umbrella of the biggest story in the entire network over this time frame, in the realm of politics. Stories about the Brett Kavanaugh hearings had over 35 million views from September 3rd to October 3rd.

Homepages and internal recirculation are the primary mode of discovering stories

Editorial and recirculation, which includes readers getting to stories by clicking a link on a homepage, a section page, or another article, sent 30% of traffic to #MeToo articles and 31% of traffic to sexual harassment articles. The network average for editorial traffic was 24% during the time frame studied.

Editorial coverage drew in a significant number of readers, though there was more readership, articles, and views per articles for #MeToo.

#MeToo has far more total views, but there are fewer articles about sexual harassment. Is there potential for more coverage of issues surrounding sexual harassment that could tap into the interest of those readers in #MeToo?

Looking at the geographic breakdown of where people are reading articles in the U.S. in September,  readership for #MeToo is clustered on the West Coast and in DC, which has 1.5 times the expected traffic to articles. Attention for sexual harassment is strong on the West Coast, too, but is also more generally evident across the country.

The media vs. the public: are there differences in how both groups are paying attention to #MeToo?

In The Atlantic, Shan Wang makes an important point about gaps in viewership and readership data when it comes to the Kavanaugh hearings. The media is “transfixed” by the hearings, but can the same be said for readers?

The same question applies to the broader topics of #MeToo and sexual harassment. The data points to a difference in the context that both topics exist within.

While the #MeToo attention hasn’t stayed at the very top of our attention spans for an entire year, that data does show that it hasn’t dropped off readers’ radars either. Perhaps there’s an opportunity to consider #MeToo stories in industries that audiences don’t already associate with it, beyond the entertainment industry.

These findings were based on Currents data from Sept. 3 through Oct. 3, 2018. To see how attention to #MeToo, sexual harassment articles, or any other topics is happening today, sign up for Currents.