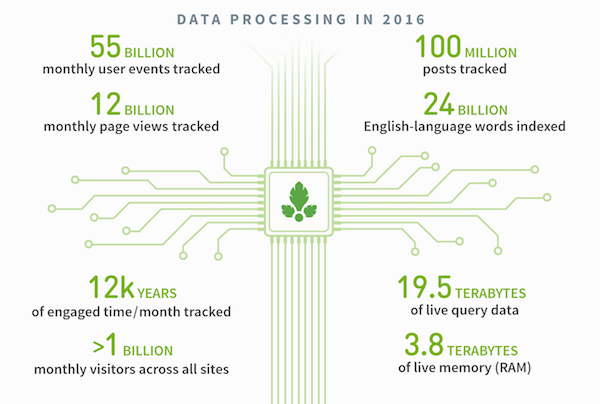 When you run a company, it can be easy to get lost in the weeds—to only see the problems and focus on them. So every once in a while, my co-founder, Andrew Montalenti, and I take a moment to look at the big picture, how different this company is from when we were launching it by sticking to a $4/day diet.

If you’ll indulge a very proud CEO, here’s a look at our growth in the past year, and what we’ve seen in terms of industry trends.

When we launched this company, I had to convince people that the media world would be interested in data.

Today, the Reuters Institute for the Study of Journalism reports that, “Many journalists also want analytics, as an earlier period of scepticism seems to have given way to interest in how data and metrics can help newsrooms reach their target audiences and do better journalism.”

The question is no longer “should we have analytics?” The question is, what can we do with that data? Digital publishers and brands look to use insights from their content analytics to do incredible things at their companies, and we’re thrilled that so many companies are turning to us to be their partner in that effort.

And publishers aren’t alone. As brands invest more in storytelling as a means to engage their audience, their teams are looking to data to provide a path to success as well. 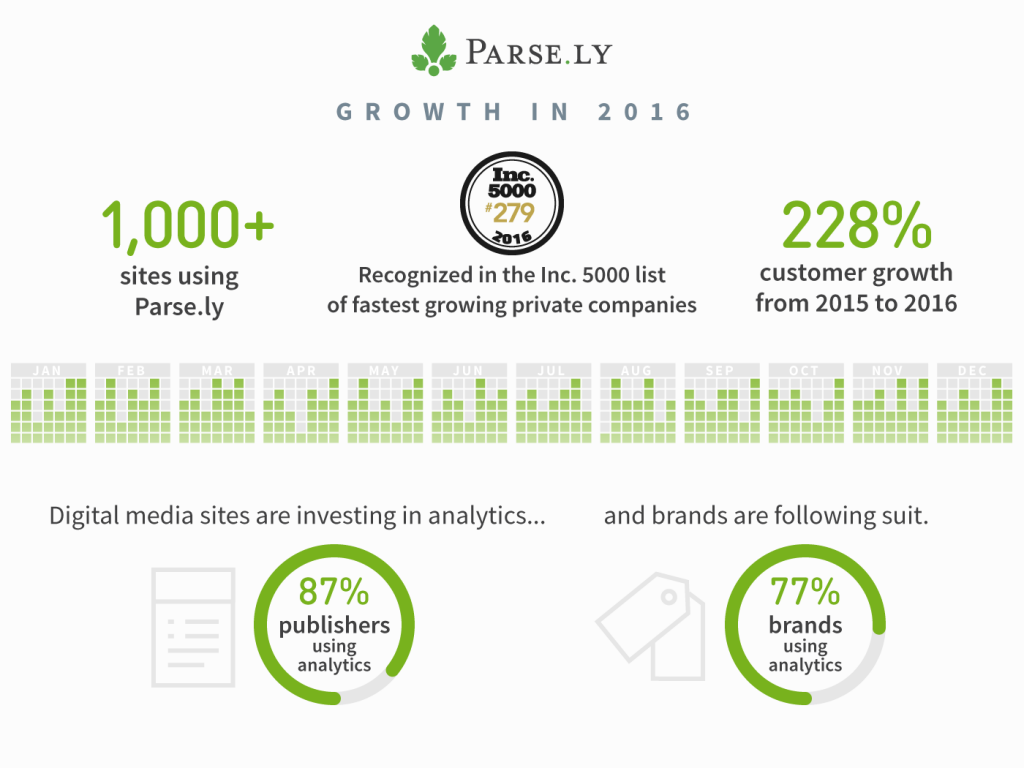 Just because companies are investing in analytics, though, doesn’t mean that our work is over. In many ways, it’s just beginning. A recent report we released found that the majority of publishers (87 percent) and brands (77 percent) have access to data, but that a gap in skills remains when it comes to applying the data to their day-to-day work. Our dashboard, API and data pipeline services are making that happen.

Why when we grow, you grow: Parse.ly’s growth reflects an ongoing need for data in all of its forms.

We’re focused in 2017 on making sure that anyone using Parse.ly—from editors to marketers to data scientists—can take actions based on the insights they find in their data. Facebook and Google have built their duopoly on data, including data from our clients. We want to make sure the people that create the content also get a competitive advantage from the data it creates.

Based on the needs of people in the digital media industry, we’ve rolled out updates to the best, most comprehensive analytics solution available. In case you missed any, we had several major product announcements and milestones in 2016:

…along with many other improvements, fixes and enhancements (which you can read about in our Changelog posts). We’ve already released more social features this year, with plenty more to come!

Digital media outlets are producing more content than ever before.

Just how much content is out there? A recently published Digiday piece provided some context:

“Today, almost everybody has a tap they turn for quick, cheap content, whether it’s unpaid contributor posts, fast-twitch ‘trending’ teams or byzantine content-syndication partnerships, and the resulting numbers are eye-popping: The Daily Mail cranks out 1,200 written stories every single day (along with over 600 videos), the Washington Post writes 500 and publishes hundreds more it has syndicated from wire services; and after focusing almost entirely on features, nearly a third of the stories Refinery29 publishes every day are trending stories, according to Neha Gandhi, its svp of content strategy and innovation (20 percent comes from features).”

Our company might make handling this amount of data look easy, but let me assure you, it isn’t. We tracked 100 million posts last year, with more coming this year, our uptime is better than ever. 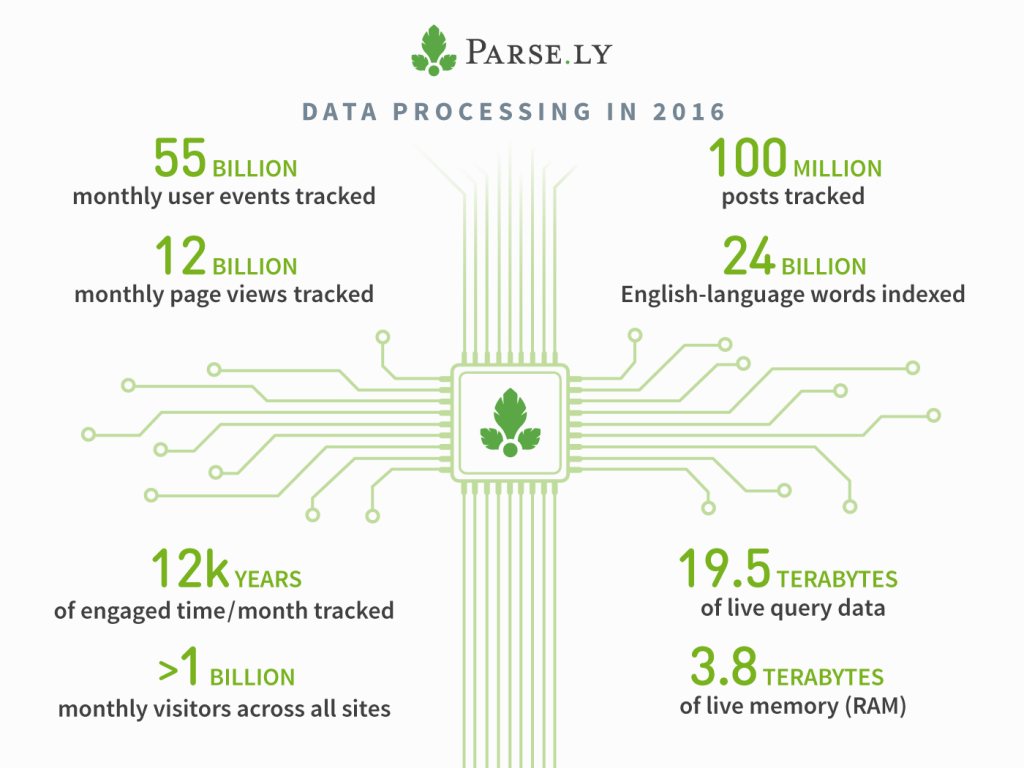 We’re proud of the progress we’ve made in 2016, and the whole Parse.ly team is looking forward to what’s next. 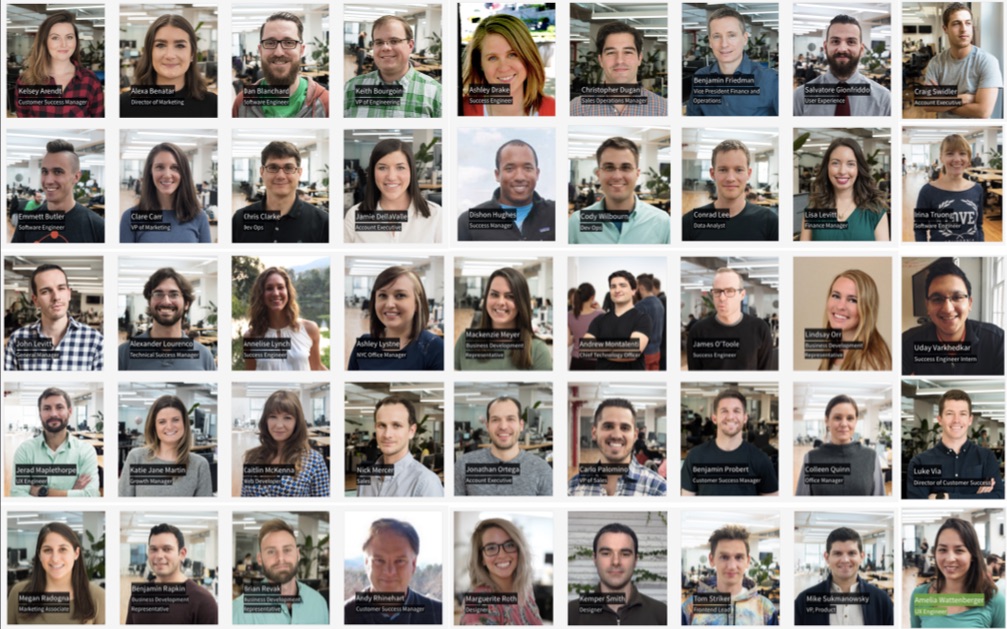