In online sports coverage, who has the home-court advantage?

Home » In online sports coverage, who has the home-court advantage? 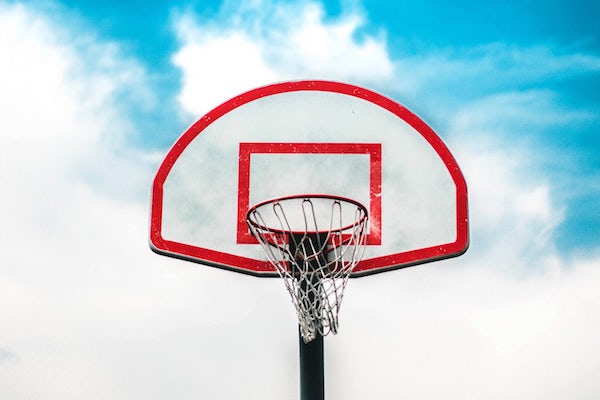 One of the new players in the sports media world, The Athletic, caused a stir last week when co-founder Alex Mather vowed to make local newspapers “bleed” and to “suck them dry” of their existing talent.

It’s a simple mission The Athletic has set as its purpose—build a subscription-based business around high-quality sports coverage by well-known writers targeted at hardcore fans, and one that might not have attracted as much attention if local journalism didn’t already have such an easy target on its back.

The playbook that Mather and team are following, though, remains challenging despite their posturing.

Ghosts of The Athletic’s past

Decades ago, legendary sports editor Stanley Woodward built a sports staff so talented at the long-departed New York Herald Tribune that a rival supposedly exclaimed, “These guys will be hiring Thomas A. Edison to turn off the lights.”

The National Sports Daily sought in the early 1990s to open daily sports newspapers in cities across the United States with content created by an all-star staff. Labeled in an oral history of its 18-month existence as “The Greatest Paper That Ever Died,” The National relied on the deep pockets of billionaire Emilio Azcarraga Milmo to build one of the best sports staffs ever assembled, only to see distribution and revenue issues eventually lead to its demise.

And now sports media has The Athletic, hoping in part to do digitally what The National could not. 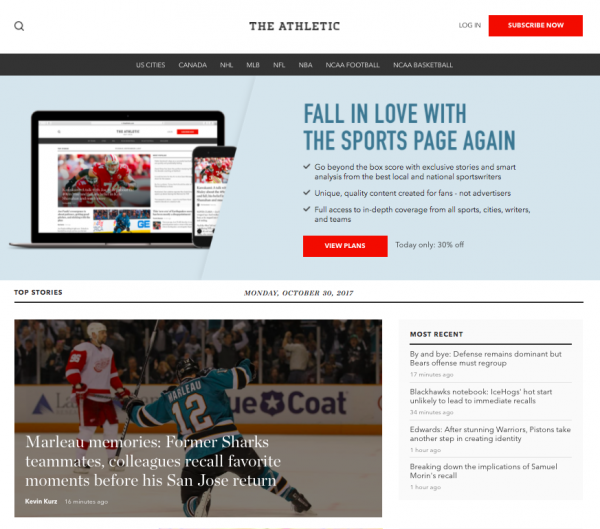 Mather’s bold statements, which he later called “less than humble,” sent many sports writers and editors scurrying to social media to lambast The Athletic and denounce its intentions. That’s not surprising; sports writers aren’t exactly known for their lack of opinions. There may, though, be some formations in The Athletic playbook worth watching for traditional local media outlets.

No secret formula to audience growth, just good execution and a monetization strategy

The Athletic’s focus on hiring well-known writers is helping the site grow its audience as those writers bring over their established Twitter followings. Recent Parse.ly research shows the wisdom of that strategy—Twitter drives a higher percentage of website referrals for sports articles than any other type of content—and data from Similar Web shows that Twitter referrals are driving a large portion of The Athletic’s growth in recent months.

And there’s certainly money to be had around sports fans. A CreditCards.com survey published in September found that Americans spent more than $100 billion on sports-related items the previous year, with $56 billion of that devoted to sporting events. Tapping into that market at the professional and major college level—where fan bases are often the largest and younger, more digitally-oriented users are more likely to be spending money—for $4 to $7 per month might indeed offer a financial path forward for media outlets.

What stands in The Athletic’s (and other newsrooms’) way

The complicating factor for both local media and outlets such as The Athletic is the growth of content being produced by leagues, professional teams and colleges. Every major professional league in the U.S. has invested in staff to produce in-house content, with insider access and the distribution options for those leagues often making that content compelling and omnipresent. Colleges are beginning to follow suit, creating content outside of their traditional sports information departments for websites geared toward their fan bases.

Professional and college teams are especially making an impact in social media channels. One of the leaders there at the moment is Clemson University, where director of new and creative media Jonathan Gantt has built a social media powerhouse since his arrival in 2013. 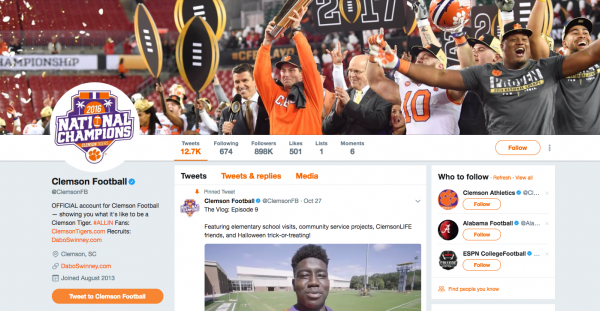 Gantt and team have focused on using social media for insider content, for showing fans—and just as importantly, potential recruits—what it’s like to be part of the Clemson athletic community. Most importantly, they’ve done so by creating quality content in a style and voice unique to the university and by tailoring content specific to each social media platform. The approach has worked – Clemson’s social media accounts have added almost two million followers in the past three years and recruits regularly share the latest posts from the team’s accounts. It’s not a stretch to think that Clemson might soon invest in similar quality editorial content for clemsontigers.com.

Even the traditional domain of local media—high school sports—isn’t safe from this trend, with the low barrier to entry for website publishing and the availability of platforms such as Facebook Live making it possible for schools to publish their own websites complete with audio and video. Some school districts, concerned about declining coverage from traditional media, are beginning to invest in editorial coverage as a means to continue to promote their student-athletes.

With millions in funding and a sound strategy, The Athletic could fulfill its mission. There’s nothing inherently special about their plans, nor anything stopping pro and college teams or even local media, save funding, from following the same script.

If those organizations do begin to devote more resources to their own coverage, it may be The Athletic who has to worry about stopping the “bleed” of talent and readers.

After all, it’s always tough to overcome a home-court advantage.

About the Author: A member of Parse.ly’s Success team, Andy Rhinehart spent the first part of his career as an award-winning sports writer and editor. In 2013 he launched a local sports website in the small North Carolina community in which he lives. He continues to run it for the local school district, which took over ownership of the site in 2015. Follow Andy on Twitter @arhine.