You are now subscribed to the Parse.ly blog!

Through the doom and gloom that is climate change news, Grist strives to be the beacon in the smog

What aspects of climate change demand our attention most urgently, and are those topics actually getting attention they deserve, according to the data? This is the question we set out to answer, and as you might guess, the response is tricky for experts to distill. “We’re seeing wildfires, droughts, sea-level rise — climate change is here and it’s real,” says Nikhil Swaminathan, Executive Editor of Grist. “Plenty of media sources are covering climate change in similar ways, and the messages can become numbing after a while.”

In fact, our data has shown that readers don’t pay attention to climate change even during immediate weather disasters like hurricanes or fires.  That’s the challenge Grist takes on every single day: how to spread the word about climate change and work toward a future that (hopefully) doesn’t suck.

So how does Grist not only garner people’s attention but inspire them to act? As Swaminathan explains, it’s about Grist’s secret sauce — a formula that involves covering climate change in unique ways, with a down-to-earth tone of voice.

In this interview, Swaminathan talks about Grist’s “warm take” on climate change, inspiring readers to wake up tomorrow and hold true to their mantra: “Don’t freak out. Figure it out.” 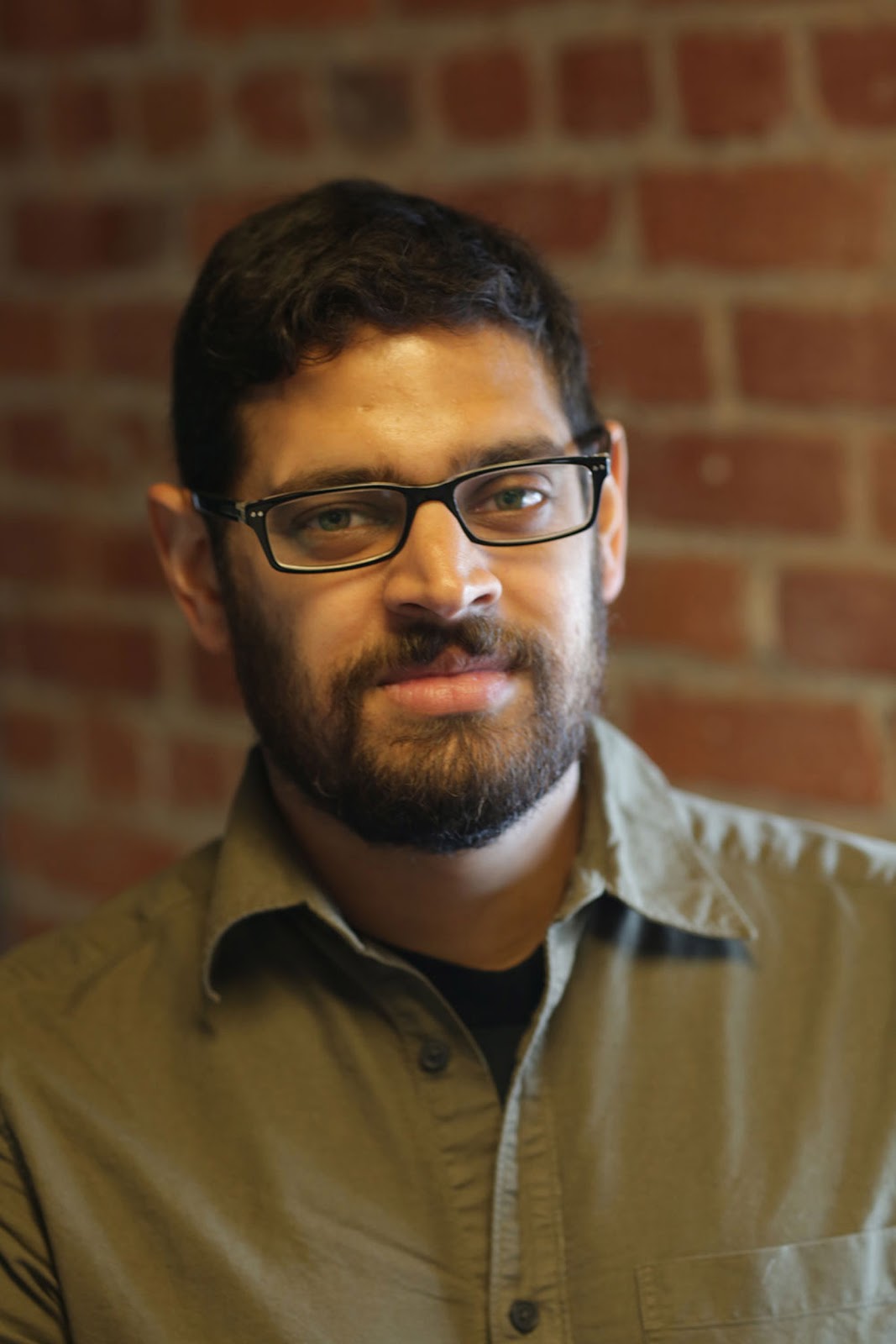 Nikhil Swaminathan, Grist’s Executive Editor, describes his career as an ongoing experiment in sating his left and right brains, but he didn’t initially set out to become an environmental issues reporter. He studied Chemical Engineering at Cornell and got his M.S. in Journalism from Columbia University.

You’ve worked for a number of science and environmental publications. What is the key difference in how Grist covers stories that impact people’s livelihoods?

At Grist, it’s a different game. When you’re covering climate change, there’s a lot of bad news. Over the past 20 years, we’re often covering an existential crisis facing human civilization by taking up opportunities to be irreverent. We have a little bit of gallows humor at Grist. In the last few years, we’ve been moving toward a strange dichotomy to highlight solutions — but not in a Pollyana-ish way. We give an honest assessment of what the chances are for making progress by focusing on good reporting on justice issues. The basic thought to our approach is that it’s not enough to have solutions to environmental problems; solutions have to reach everyone—no one can be left behind. Those are Grist’s primary tenets. We empower readers to act and help them get up the next day.

Those are Grist’s primary tenets. We empower readers to act and help them get up the next day.

Do you see examples of how your work empowers Grist readers to act?

We don’t monitor their lives, but we do receive feedback. We have a whole development team that keeps track of feedback; we hear frequently from readers who praise Grist stories and talk about how our content gives them hope. We receive the most feedback in response to a writer named Eric Holthaus, a Ph.D. in meteorology. His writing distills the science of climate change, but he also talks openly and often about the need for climate action.

In terms of acts readers take on the site, we recently studied a couple of data points: We helped Eric launch a newsletter called Climate of Courage, which is about keeping your chin up against the odds of solving the climate crisis. It’s a very galvanizing read—it engenders with hope and courage that we have to keep working at this. Climate of Courage has a 40% open rate, which, I’m told, is double the industry average for a newsletter.

Our daily newsletter, The Beacon, started off kind of slow, but the open rate has crawled up and is hovering around 30%. With it, we’ve doubled down on the long-standing Grist tagline: “Beacon in the smog.” It has two parts: “The Beacon” informs readers of a daily sign of progress. “The Smog” is things they need to know—which tend to be negative— like the latest Trump administration regulatory rollback that could endanger people’s health. Those newsletter stats show signs that we’re having the kind of impact we want.

With all hands on deck, Grist set out to publish a witty breakdown of the climate assessment and created “We broke down what climate change will do, region by region. Yeah, we read each chapter of the report so you don’t have to.”

How does reader data and content analytics inform your work?

We’ve been putting together content analytics to see how our content has performed up to this point and how our content might perform in the future. Over the past two years Grist relied on a cover-story model—we’d run one big, splashy long-form piece once a week along with several small pieces. We started to do a performance breakdown of the those long-form sciency stories about energy and food-related issues stories, to see which ones were more popular.

We learned that our readers are most interested in stories about energy, and that information helped us this year to ensure that we’re offering enough of those sorts of stories. When we posted stories about whether batteries and nuclear energy are a viable energy solution in the 21st century, we saw a lot of engagement. We didn’t just become an energy news site—but we took that as a hint that we should increase attention on this topic. We also saw traction on policy-related stories; I wouldn’t be surprised if that had a lot to do with midterm elections, but we definitely rode that wave.

How do visuals play a role in Grist’s content?

Our in-house illustrator Amelia Bates is very talented, and has a unique and consistent voice. Her work is a huge advantage that Grist has in the Internet space—we have a visible visual brand, all credit to her. I suggested that she start watermarking her illustrations, so that someone going through Twitter will know the visuals are branded with Grist. We’re trying to make little tweaks to the Grist brand so that it becomes a bit stickier.

How has Grist evolved since it started in 1999?

We were the only game in town in regards to climate change back then. Over the years, there’s been an ebb and flow. During the recession, when journalism contracted, people let go of science desks, and climate change wasn’t covered as much in mainstream press. With Trump in office, there’s a lot of amazing climate coverage out there. We’ve doubled down by focusing on the unique traits of our writers’ voices and unique ways of packaging stories.

Our writers’ interest in environmental issues are different than what’s out there in mainstream journalism. For example, Eve Andrews covers the intersection of climate change and women’s health and gender issues, which you don’t see out in the world. Her perspective spawned her essay, “Why didn’t reproductive rights show up in the National Climate Assessment?” She gets into all kinds of policy-related conversations and is creating a new mold for scientists of the era.

We only have about a decade to act. Especially at this moment, it’s important to own our idiosyncrasies and not blend in with the herd. We have access to partners from Mother Jones and New Republic and HuffPost articles through the Climate Desk partnership, so we didn’t have to follow around Scott Pruitt to cover his latest scandal. That access allows us to publish stories that are unique—like a story (“War of Words”) by our news editor, Kate Yoder, who grew up as a pacifist Mennonite, about how climate change is often talked about using war metaphors.

“War of Words” by Kate Yoder

What is Grist’s secret sauce to covering climate change in a different way?

Our challenge is to highlight people, technologies, and communities working to build a just and sustainable world. And when we highlight these efforts, we’re also looking at social justice.

One of the things that people are keeping an eye on is the Green New Deal, a Marshall Plan idea for a clean-energy economy—green jobs, switching to clean energy away from fossil fuels. It’s a huge, ambitious plan, and the Green New Deal seems beyond the scope of what today’s politics are capable of. But over the next year, Grist and many others will keep an eye on what’s going on with the Democratic Caucus in terms of climate policy coming down the pike after 2020 and beyond. Right now there’s not a lot of action on the right side of the aisle, even though there once was. It’s a shame. Grist is a nonpartisan nonprofit organization, but all the action is happening only on one side, and we have to cover it.

What are you top three most-recommended Grist readings?

These are three of our most-popular stories from the end of 2018. They showcase a decent breadth of our content.

“We broke down what climate change will do, region by region” is a group effort that shows how we think through repackaging the information in a 1,000-page national climate report.

“The bizarre and frightening conditions that sparked the Camp Fire” is a classic Eric Holthaus piece, where he makes science behind climate-related events digestible for readers.

“Death by Fertilizer” is one of the best solutions stories we ran in 2018, by our senior writer, Nathanael Johnson. It explores an alternative way of getting the fertilizer that we need to grow our crops. (The current method is a major contributor to climate change.)