Home » Trying to predict referral trends in 2019: what we got right, and what we got wrong

I wanted to check back in on some predictions I made at the beginning of the year. We’ve got one more month to go before we can do a proper year-over-year assessment, and though we probably shouldn’t expect any game-changers to happen at the buzzer, we can at least touch base on where we’ve landed year-to-date: what were the biggest referral trends of 2019?

Our original predictions were not just about big growth trends. I also took into consideration the average month-over-month change and the standard deviation of that change. In plainer terms: how quickly is a platform growing, and how reliably can you expect that to continue? I wanted to set a new standard that prioritized predictability. After all, what good is banking on a triple-digit percent uptick, if you’re not sure whether you’ll lose half of it the next month?

So where did we land? With a clearer perspective on how audiences engage with aggregators, with Facebook making a slow-but-steady comeback, and with your SEO efforts likely extending beyond traditional search results.

Let’s start with everything that’s not search or social: all that aggregator and other external traffic.

Early in the year, we described these referrals as “the fastest changing category that sends traffic to our network.” Based on 2018 trends, SmartNews was likely to generate positive growth even in a low month. Google News showed no signs of slowing down. 2018 was a good year for Flipboard.

But in spring 2019, after our predictions were complete, its referrals began to slip. Even so, Flipboard’s positive overall growth in 2018 and its rate of change were still within the “normal” range. At the time, I wasn’t ready to say for sure whether this was a long-term trend, but a few more months made it clear that it was. 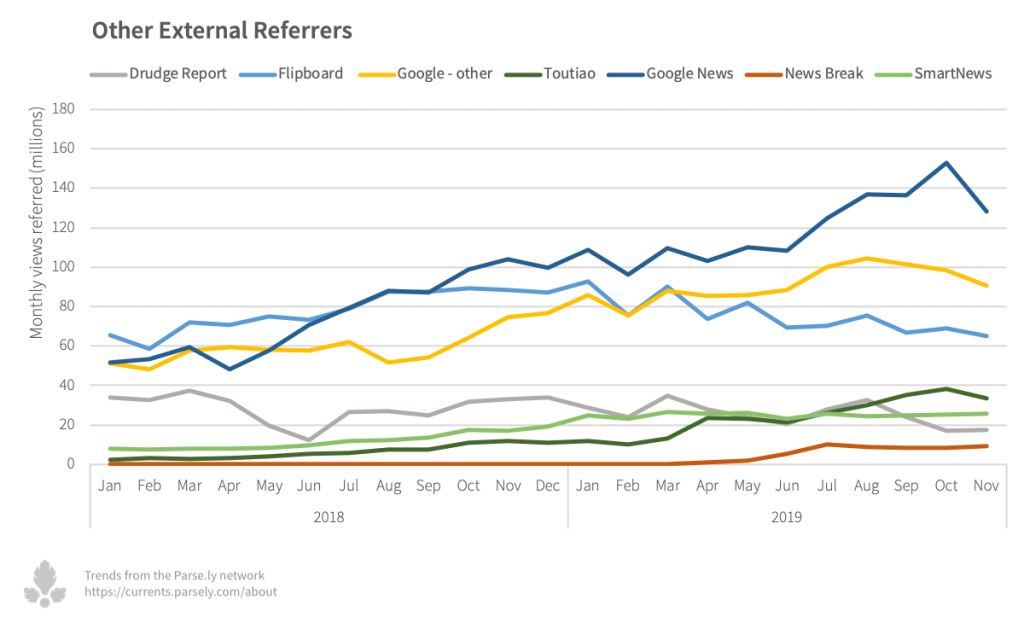 For the most part, aggregator trends fell in line with what we anticipated. Platforms showed net-positive growth, even if it was at a slower growth rate than in 2018. Flipboard showed steeper month-over-month changes than it had previously, with a net-negative trend as of November.

Furthermore, this “fastest changing category” has already evolved, and will continue to. New domains like Newsbreak and Toutiao have entered the scene, with new markets powering their velocity. As more apps are developed, adopted, and scaled out, the more likely we’ll need to redefine what constitutes “normal” growth in this category.

But what should we make of flashy growth stats? Or when that velocity seems to slow down? It’s questions like these that hint at our fear of unpredictability. The digital landscape is too chaotic for us to constantly scramble for the Next Big Thing. We have jobs to do!

It’s important to remember that a triple-digit percent uptick in referrals from a new platform indicates the app had a lot of room to grow. Meanwhile, more mature platforms are developing predictable patterns. Platforms in the ByteDance family, for example, are newer, or at least new to national and global audiences. The same was true for SmartNews two years ago, and for Flipboard before that. Headline-making stats for these platforms signal new market growth, the result of the company’s investments, marketing, and PR.

As those apps gain traction, their growth numbers normalize. The fact that many of the apps featured here have fewer high-growth months in 2019 is not necessarily a bad thing: it means we know what kind of audiences and traffic to expect from them. That’s the stuff strategies are made of.

In 2018, Facebook referrals grew net 14% from January to December. I was hesitantly optimistic, and I’m sure you were too. Every category of content was impacted from the platform’s algorithm change, and some content was hurt more than others. Still, we noticed a positive turnaround in August 2018, which has continued into 2019. 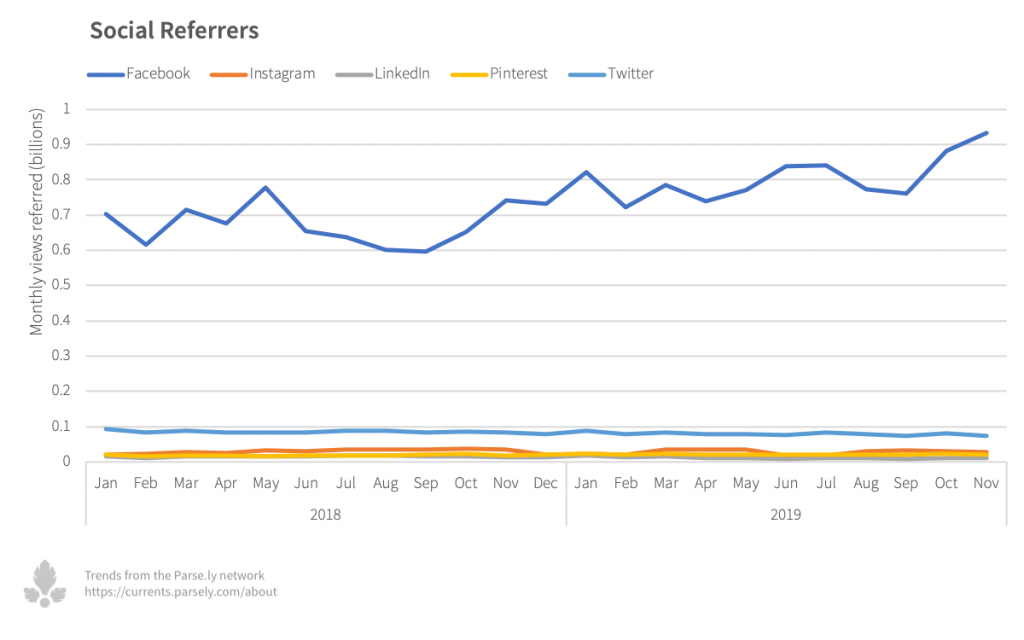 In fact, Facebook is a great example for why predictability and rate of change can signal more than absolute numbers alone. In 2017, preceding the big friends & family algorithm change, was a period of dramatic ups and downs. That kind of pattern is not what organic reader engagement looks like: that’s what product experimentation looks like. Swings like that signal unreliability. Later that year, those swings normalized. Even though referrals were trending downward, they did so more predictably.

Throughout 2019, that predictability shifted in a more positive direction. Is this the result of Facebook News? Of advertising in Groups and niche communities? Stay tuned.

Optimizing search for the long run

Search referrals comprised 20-25% of traffic to Parse.ly’s network throughout 2019, with Google sending more referrals in a month than Bing and Yahoo! sent the entire year. 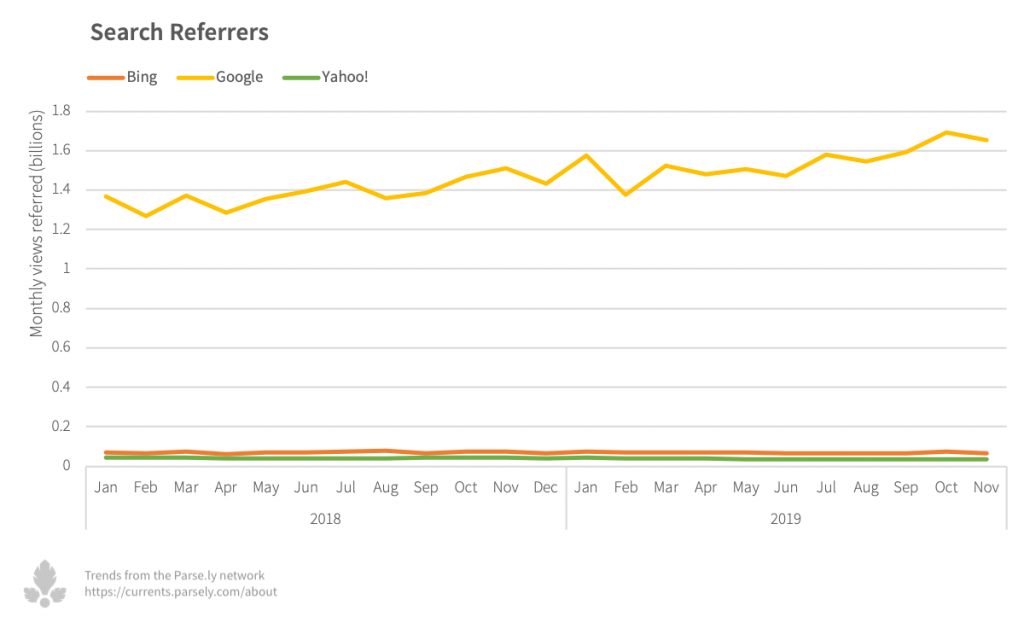 Google’s volume of referral traffic has grown overall, but so has its offerings. A little over a year ago, Google announced that they were layering Knowledge Graph personas with topics, resulting in content recommendations based on users’ search journeys. The search giant’s latest feature, Google Discover, gets lumped under Google Search. This, among other product developments, formalized what we noticed over time as a grey area with Google: referrals like Googleapis and the quick search box that sit between traditional search and explicit content aggregation. 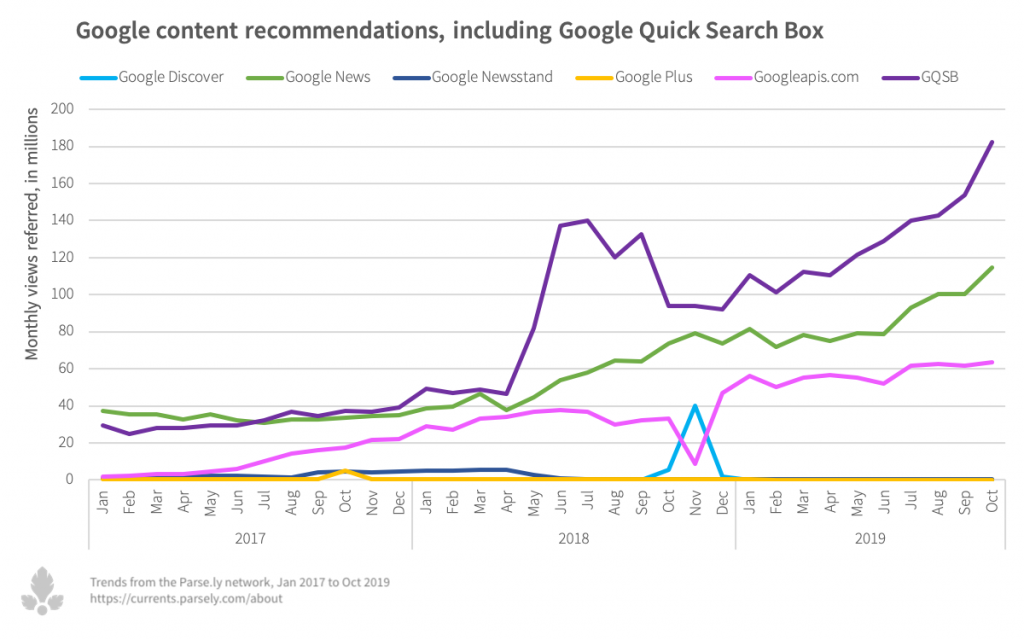 Google had previously made a concerted effort to consolidate its news aggregator products, Google Play Newsstand and Google News, a move that reinvigorated referral growth for Google News in early 2018. So it’s not out of the question that similar developments in its search products could do the same.

Considering the expansion of Google AMP, and the fact that all products in the Google family continue to grow, there’s little doubt that Google’s iterations on additional features will only increase its dominance in the search space.

Ultimately, the platforms you want to build your business around should have some kind of consistency. But a spike in a positive trend is worth marking too, as it signals new and specific audience opportunities (or at least a solid option to experiment with one). Once you know what to expect month-over-month, and you have yourself a reliable, predictable audience acquisition strategy.

We made a few more predictions which we’re going to dig into in the new year, and we’re excited to make some new ones! Social media may take on a new shape, with platforms doing geography-based beta tests or threatening to hide engagement stats. A focus on digital privacy is no longer confined to info-sec experts, as internet browsers roll out privacy updates to anyone with a digital device. Analyzing referrals will only part of the story: the very infrastructure of the way readers get information is changing.

For more on 2019’s biggest trends, we hope you can join us for a webinar with our partners at NAPCO. Want to get next year’s predictions? Sign up for our newsletter.