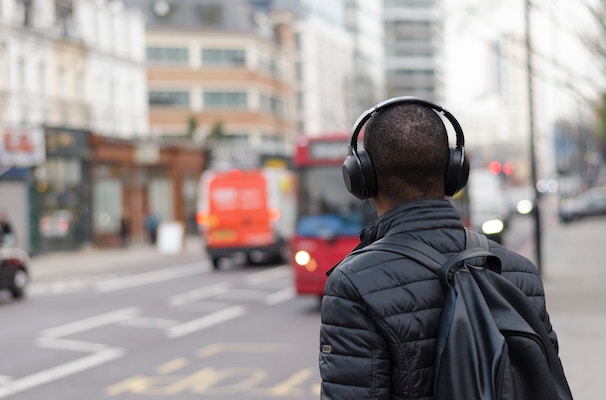 Many listeners discover podcasts incidentally. They hear about a new show from a friend or see something that interests them in a category on iTunes. The podcasting industry even tried to capitalize on this behavior in March through the #tryapod campaign.

Data could change discovery. The availability of listener data from Apple could impact how audiences find podcasts. There’s potential to implement innovative metrics for surfacing content. And though it’s in beta now, a new “IMDB of podcasts” called Podchaser is building a database on a tagging system that will offer an alternative podcast discovery method. Hopefully changes like these will help audiences find new or lesser-known shows that are suited to their tastes.

Even though data availability holds potential for the industry, that’s not to say word-of-mouth recommendations will take a back seat. In that spirit, here are some suggestions for media-focused podcasts.

The tagline for The Turnaround is “Interviewers, Interviewed.” In this very meta show, produced by Maximum Fun and Columbia Journalism Review, Jesse Thorn sits down with interviewing powerhouses from across industries to discuss their careers. In an interview with Poynter, Thorn said, “(This podcast) was a little bit like a weird form of journalism school for me.”

Episodes include discussions with journalist Susan Orleans, podcast host and comedian Marc Maron, and This American Life host Ira Glass. The Turnaround will run twice a week through the summer.

Another podcast from the Columbia Journalism Review, The Kicker covers current events and issues in the media industry. Topics of recent episodes include “What’s the point of ‘women’s publications’?” and “The end of the public editor at The New York Times.” CJR shares a brief write-up of every episode, including links to articles relevant to the conversation. The host of The Kicker, David Uberti, joined Fusion as a reporter in July 2017, but other CJR staff members will continue to host the show.

The Digiday Podcast features interviews with industry leaders from brands and publishers. Recent episodes include discussions with the COO of News UK, the co-founder of Reddit, and the chief content officer of Refinery29. Conversations revolve around topics of current interest in the industry, as in this interview with Slate’s editor-in-chief, Julia Turner, about making data-informed decisions in the newsroom and the industry shift toward focusing on loyalty.

Brian Morrissey, Digiday president and editor-in-chief, hosts the show. Episodes usually clock in at about 30 mins and write-ups on the site highlight key quotes, making the podcast easy to consume.

WYNC’s On the Media is a “weekly investigation into how the media shapes our world view.” Hosts Brooke Gladstone and Bob Garfield discuss current events from a journalist’s perspective and dig into topics of concern to reporters. Episodes of the podcast explore how science fiction scrutinizes climate change, the nature of press briefings in the current administration, and the ethics of terror coverage.

The weekly It’s All Journalism podcast, produced in partnership with the Association of Alternative Newsmedia, revolves around “the changing state of the media.” Guests include academics, journalists, authors, and other media professionals. Episode topics range from a conversation about solutions journalism with Andrew Wenzel, a senior research fellow at the Tow Center for Digital Journalism, to a discussion with Adam Zyglis, the Pulitzer Prize-winning cartoonist for The Buffalo News. 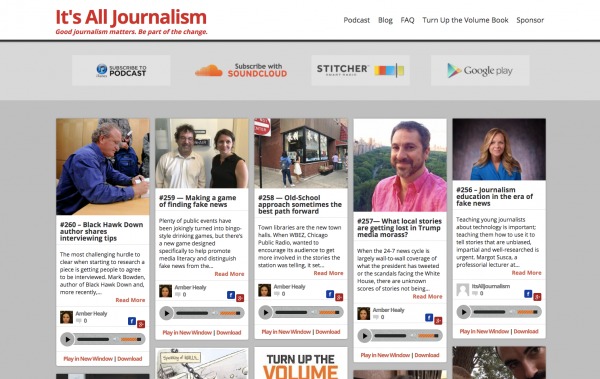 PNR With This Old Marketing Podcast

Content Marketing Institute’s podcast is (naturally) about content marketing. However, hosts Joe Pulizzi and Robert Rose cover current media news and discuss topics relevant to all content creators, including journalists. Recent episodes of This Old Marketing focus on trust in the “fake news” era, the state of digital advertising, and where the hosts find inspiration for their own writing. Each episode closes with a “Rants and Raves” bit followed a content marketing “Example of the Week.”

Episodes can run upwards of an hour, but you’re interested in a specific topic, CMW breaks down the conversation by topic. Each segment is flagged with a timestamp for easy navigating and includes links to sources.

Ignoring for a moment that this post purports to be a list of six podcasts for journalists, it’s worth checking out this seventh podcast that’s not at all about journalism but offers an example of expert storytelling.

Host Hrishikesh Hirway introduces each episode of Song Exploder, a Radiotopia show, as “a podcast where musicians take apart their songs, and, piece by piece, tell the story of how they were made.” There’s something to be said for the production value of the show, which weaves together samples of music and clips of interviews to form a narrative. Hirway briefly introduces each band and then lets the artists’ story take center stage. Though not journalism-focused, Song Exploder offers an example of crafting a seamless story through interviews.

Do you have any podcast recommendations for journalists? Let us know by tweeting @parsely.