Time well spent: The most engaging articles across ten news categories in 2017

Home » Time well spent: The most engaging articles across ten news categories in 2017 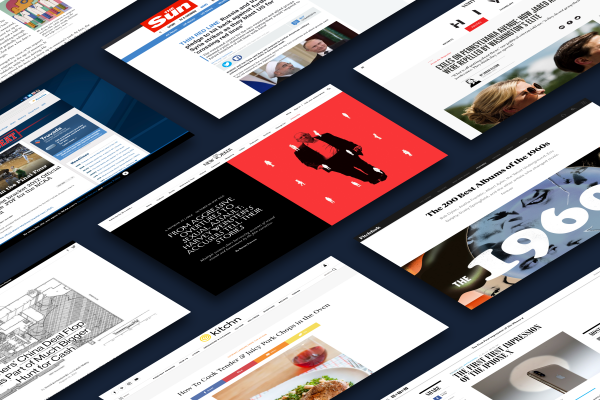 What topics did readers spend the most time with in 2017? This question preoccupied us as we reflected on a year that brought with it tumultuous change.

Content isn’t apples to apples; how people discover and engage with articles varies by topic. The benchmarks for a successful music article might look very different from a politics article. Honing in on the most engaging posts across ten categories in our network reveals the stories that resonated most with their unique audiences.

With overarching trends as context, here’s a closer look at the media that caught and held our attention last year.

The most engaging articles across ten categories in Parse.ly’s network ranged from a recipe for pork chops to a list of the 200 best albums of the 60s. However, it was national news that took the spotlight.

Here are the top 10 most engaging articles in our network in 2017 from highest to lowest total engaged time, followed by a deeper dive into some of these categories. 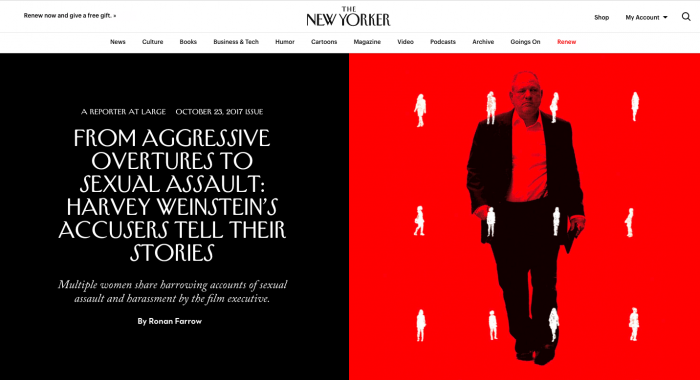 The New Yorker‘s most-read story of 2017 also garnered the highest total engaged time of all articles among the topics studied across our network. Ronan Farrow’s investigation of Harvey Weinstein holds a critical place in the #MeToo movement.

The average engaged time for the piece is striking: 6:58 minutes. What that means is that this article was more engaging than 99% of other content on the internet.

An analysis of the distribution of visits by engaged time found that 50% of visits to all media content were between 1 and 7 minutes. The average engaged time for Farrow’s piece falls right at the “reasonable maximum” engagement rate for content online, or in the top 1 percentile: 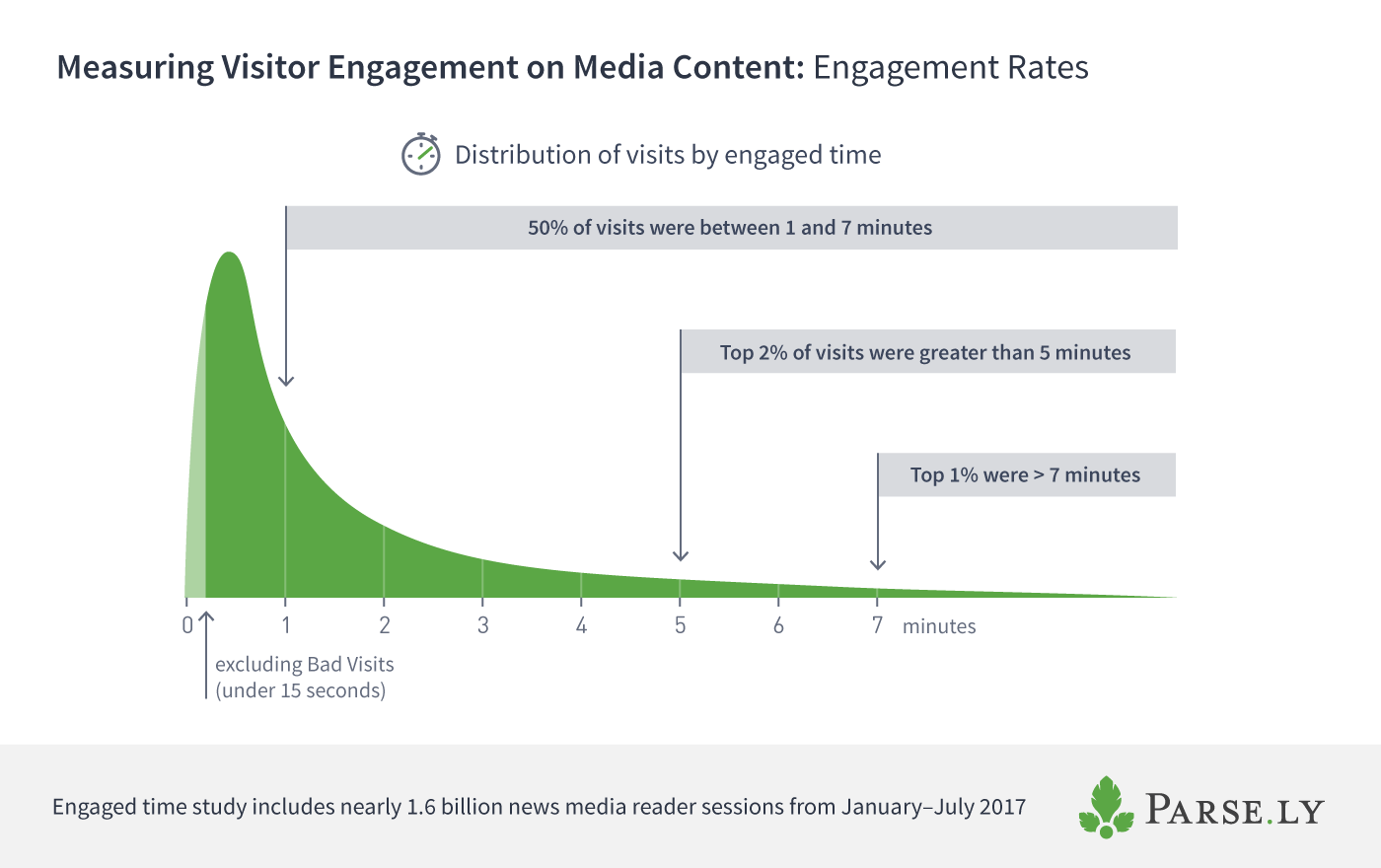 People were preoccupied with the personalities of the White House 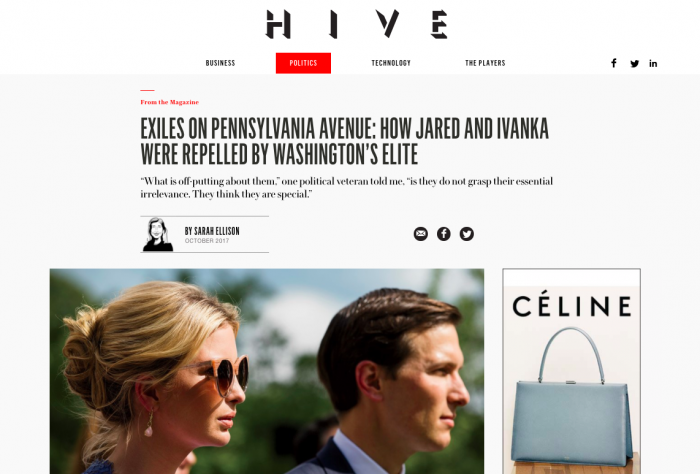 After the lifestyle category, politics was the next most engaging topic. Sarah Ellison’s Vanity Fair piece on Jared Kushner and Ivanka Trump earned the most total engaged time for politics stories, followed by Ryan Lizza’s reporting on Anthony Scaramucci for The New Yorker and Evgenia Peretz’s “Inside the Trump Marriage,” also for Vanity Fair. In general in Parse.ly’s network, politics had the highest average engaged time in seconds per article, at just over a minute.

Of the top fifty most engaging politics stories, fourteen were explicitly about Trump. (In this assessment, for an article to be “about” a politician, it had to include the first or last name in the title and the full name in the body of the text.) Overall, articles that mention Trump had the highest readership by page view volume in our network: 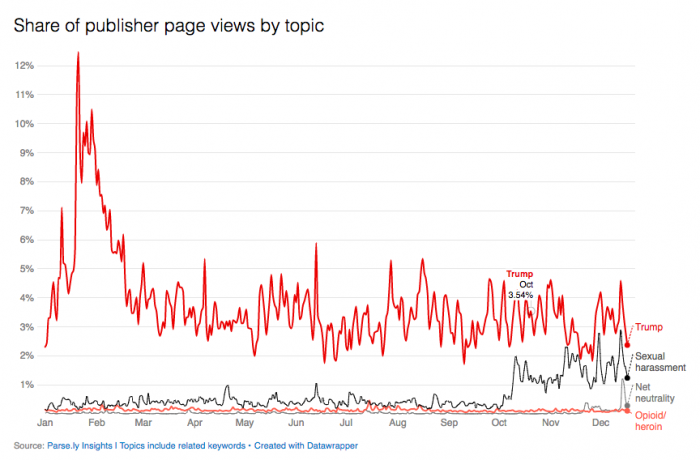 Other articles in the top fifty most engaging politics articles covered noteworthy people and news related to the White House, such as Mike Pence, James Comey, Steve Bannon, health care, the inauguration crowd size, and the Russia investigation. Why did the people of Trump’s administration, rather than policies, take so much of the spotlight? Maybe it’s because of the “reality show” element of the White House, or maybe the profile angle is what connects people with stories. 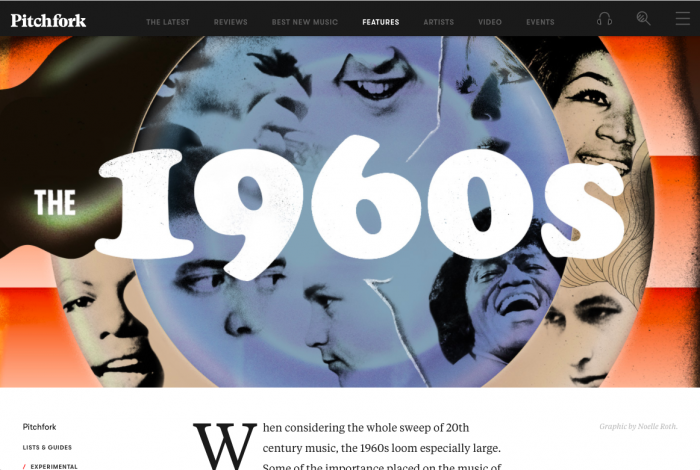 In general, average engaged time for music articles  in our network is low: 37.7 seconds per article. There could be any number of contributing factors, but one hypothesis is that many readers discover music they want to listen to and then navigate away from an article to do just that.

With “The 200 Best Albums of the 1960s,” Pitchfork created a rich experience for music fans that kept them on the page—or rather, pages. On average, visitors spent over 35 minutes of engaged time with the ten-page piece.

Pitchfork’s article is brimming with information: videos, a review of each album, and an accompanying playlist. The intro to the piece sets the intention of enabling discovery: “[S]o many top LPs from the 1960s continue to enthrall old and new listeners, and they’re still re-discovered and re-assessed…. [W]e hope this list represents the best of what the decade has to offer and reflects how people explore music now.”

The depth of engagement readers had with this piece suggests Pitchfork captured the browsing experience, translating the way fans discover vinyl into a digital medium.

Technology readers searched for details on the iPhone 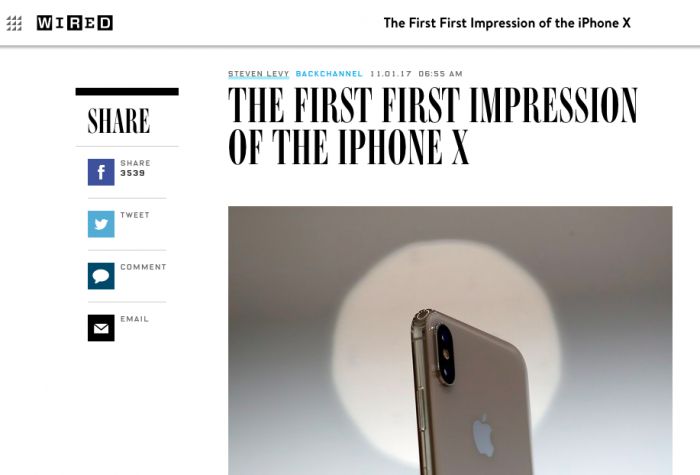 Google was a primary referring domain for both of the top Wired articles, which aligns with overarching trends. Global Google Trends data for 2017 found that “iPhone 8” and “iPhone X” were the top two search queries in Consumer Tech.   Overall, 60.8% of referral traffic to tech articles is from Google Search:

Surveying links to the top fifty articles in the category suggest that they’d hold up well to search queries. Many of the articles are how-to guides, product reviews, or “best of” lists. Once someone searches for an expert opinion, explainer, or how-to guide, it’s easy to imagine them spending time learning from the article.

An exception to the above rules, where how-tos and guides dominate, lives in the runner-up article: “This Photoshop Troll Is Still The Master Of His Craft” by Ross Snow of College Humor. Everyone speaks the language of humor, even technologists.

High-level takeaways from the ten most engaging posts in Parse.ly’s network, by topic

Google is a powerful referrer to publishers.

Google was the primary referring domain to over half of the top ten articles. In general, referral traffic from Google increased in 2017, while traffic from Facebook declined: 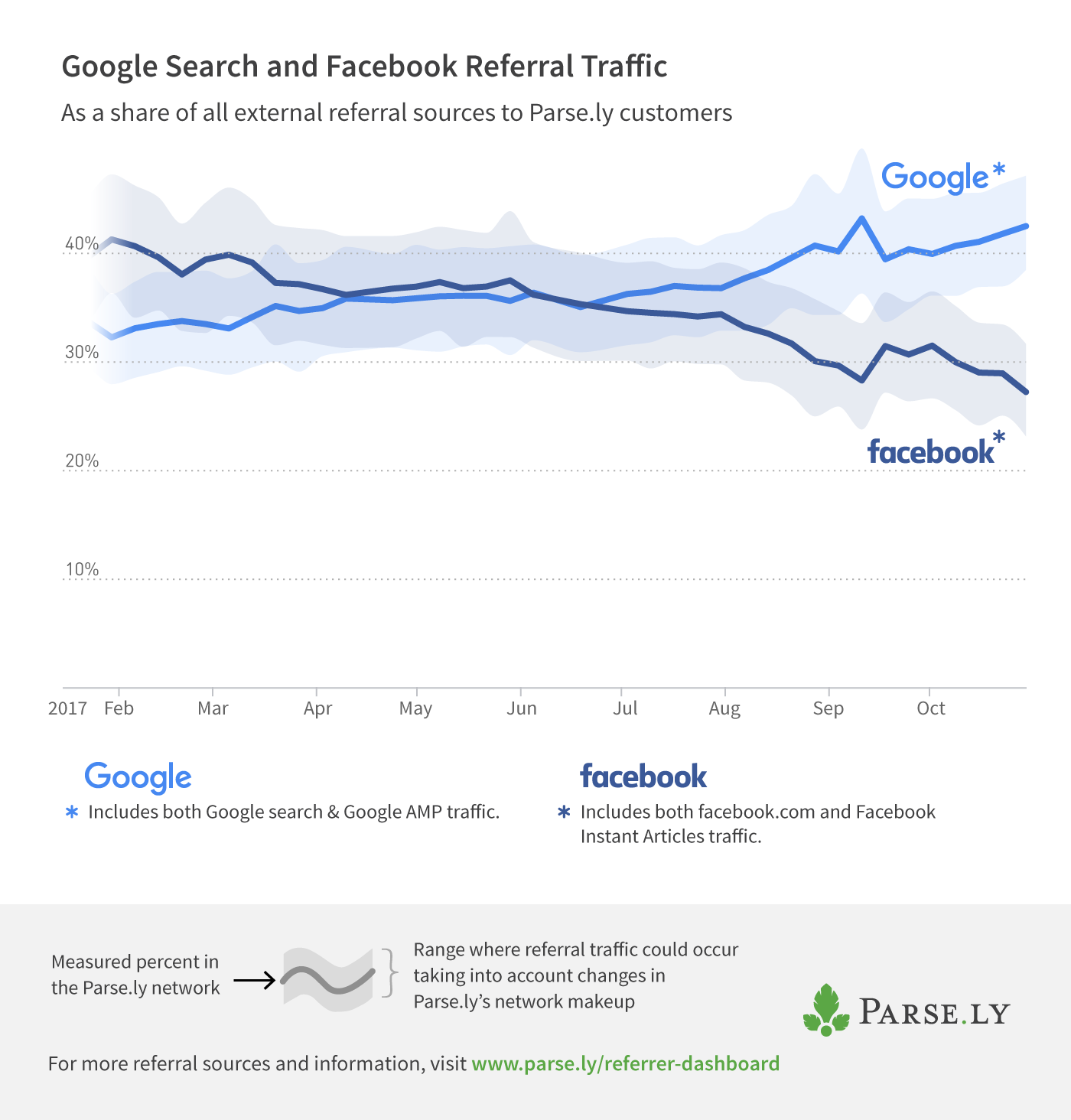 Eight of the top posts for each category contained video and Bloomberg’s article on “Kushner’s China Deal Flop” featured an interactive data viz. Time spent watching video and interacting with graphics likely added to the high total engaged time for these articles.

Of the top posts for each category, seven were what we define as long-form, or over 1000 words. The top articles in the lifestyle and politics categories were over 7,000 words. The number of top posts by topic that were long-form and/or contained video supported the suspicion that audiences have an interest in longer content.

When the content is high quality, like the top posts in our network this year, readers are willing to spend time paying attention.