What’s driving the news cycle of the Trump administration?

Home » What’s driving the news cycle of the Trump administration? 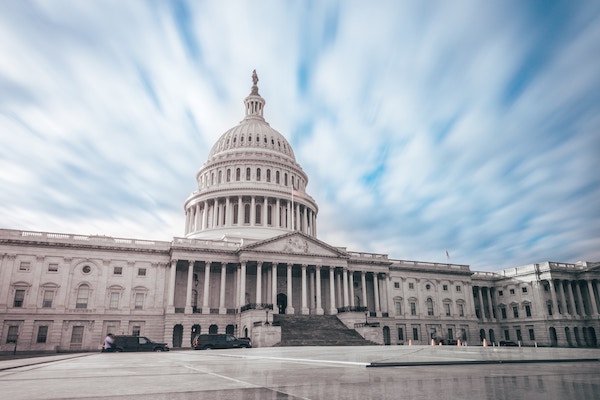 Donald Trump is the most-viewed topic in our network, crossing the boundaries of multiple content categories—politics, business, news. We’ve investigated search intent vs. total attention for stories about the president and found that the volume of searches does not align completely with the volume of readership.

Ahead of the midterms, we wanted to revisit the question: What are people paying attention to online when it comes to this White House?

For this study, we considered people and policies among the top fifty topics related to Donald Trump. Here’s a closer look at topics that held readers’ attention in the last six months of the Trump administration and the implications of how they were discovering those articles.

What stands out? People account for the topics related to Trump with the highest peak attention: Vladimir Putin, Michael Cohen, Brett Kavanaugh. Topics related to policies, such as immigration, China, and trade, tend to have prolonged attention without as steep peaks. 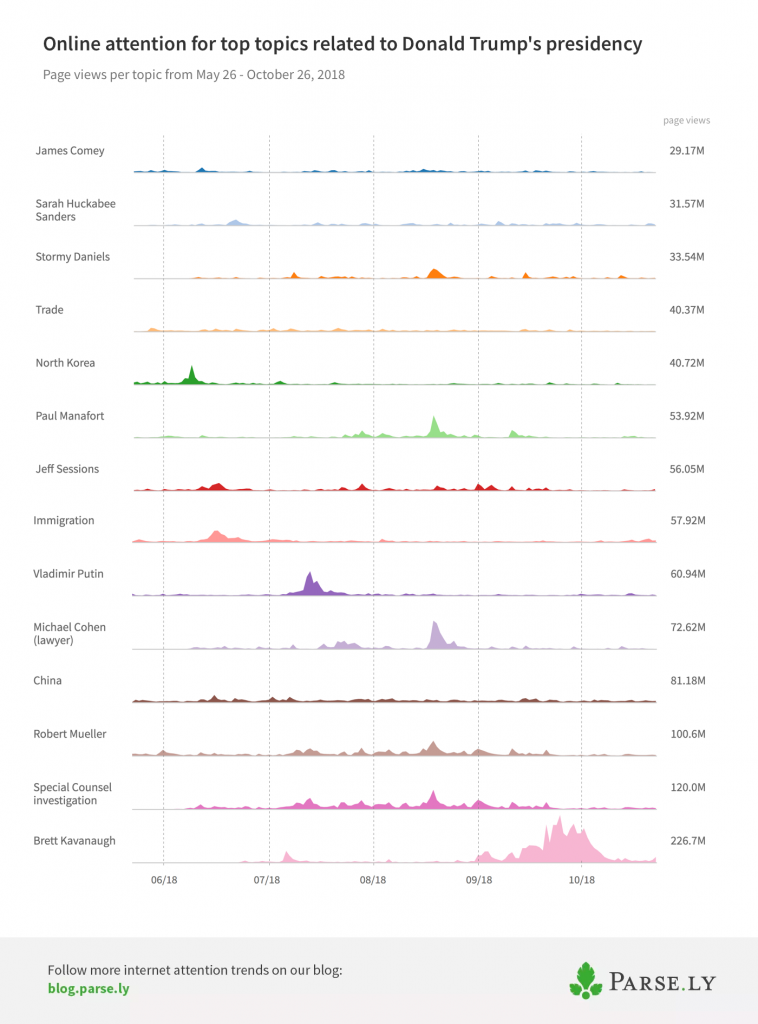 The topic with the highest peak attention also had the most total attention: Brett Kavanaugh, with 226.7 million views. That’s nearly six times the total attention of topics like trade or North Korea. Politicians may run campaigns on the issues, but readers’ attention is on the politicians themselves.

Discovering politics stories: “Other” traffic and the prevalence of news aggregators

Social media referred the most traffic for certain topics, especially immigration, Brett Kavanaugh, and Sarah Huckabee Sanders. Across the board, editorial (homepages, section pages) and internal recirculation sent significant traffic, about 25% or more to each topic. 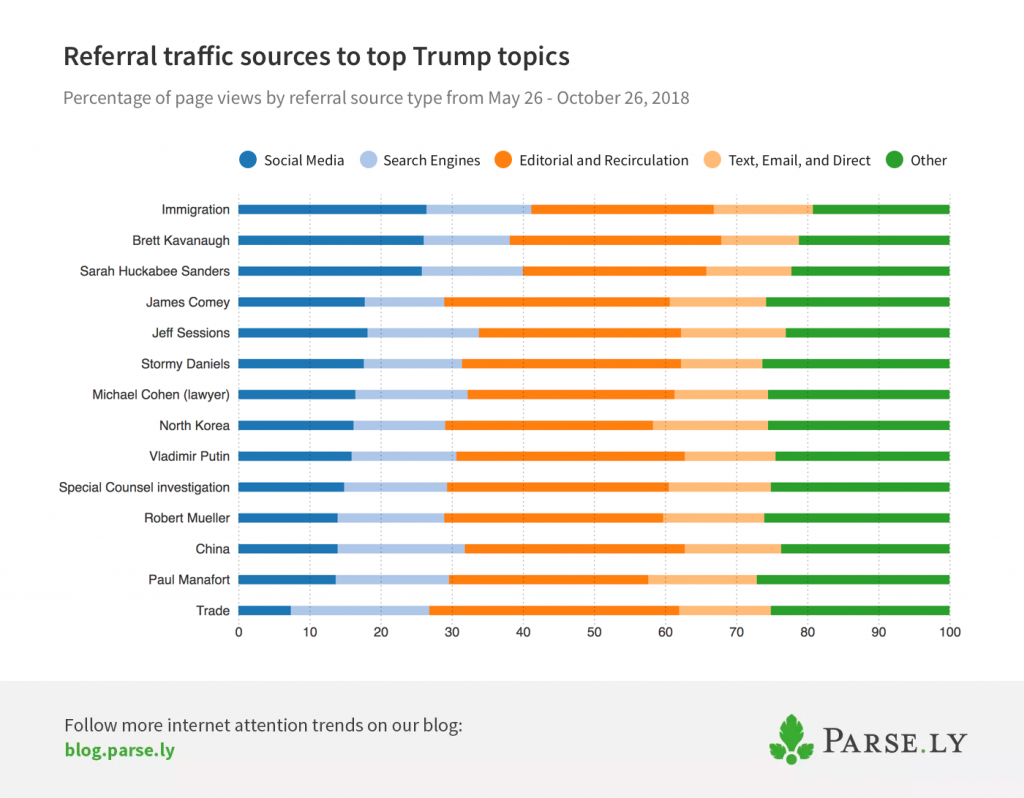 Of all the ways people were finding articles that we studied, “other” sources—RSS feeds, apps, and aggregators—stood out because referred traffic was higher than average. Across all content during the time period studied, search engines drove 31% of traffic to articles while other sources drove 12%. However, with Trump-related topics, these percentages are roughly flipped. The news about Trump finds you, and not the other way around.

Take the topic with the highest amount of “other” traffic for example. “Other” sources drove 26% of traffic to articles about Paul Manafort—more than twice the network average. Google News sent the same percentage of traffic as Facebook to articles about Manafort. Also among the top other referrers to Manafort stories: Drudge Report, Flipboard, SmartNews, and googleapis.com.

The news about Manafort pleading guilty broke in August in tandem with news about Michael Cohen, with multiple updates coming through over the course of a day. The data suggests people are relying more on a mix of news sites and aggregator platforms, bucking the trend of everyone getting their news from Facebook.

Increased attention doesn’t always impact the polls, but will it impact voters?

With all of this attention to stories related to the Trump administration, we had to wonder: does attention correlate to opinion?

Not necessarily. When you consider Trump approval ratings as measured by FiveThirtyEight, it’s rare that a peak in attention corresponds to any movement in the polls.

We did notice increased attention for Paul Manafort, the Special Counsel investigation, Michael Cohen, and Stormy Daniels in August, followed by an increase in Trump’s disapproval rating after those peaks in attention. Taking all these topics into account, it seems the FBI investigation affects approval ratings. 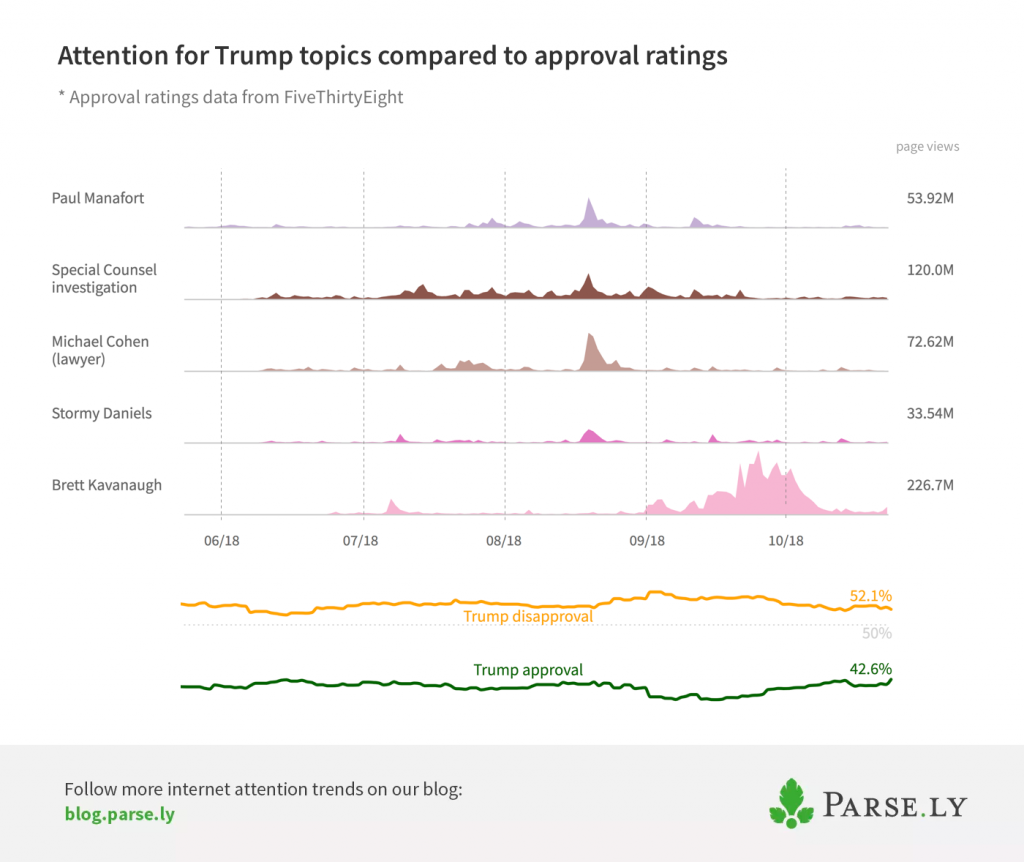 News about Trump may not always change opinion, but that’s not to say it doesn’t change behavior. With so many people reading about Trump, will we see any impact on voting behavior over the long term? The midterms will be a good indication to see if what people pay attention translates into action, especially at the voting booth.

Interested in the data studied here? Find data around these topics and more in Currents.