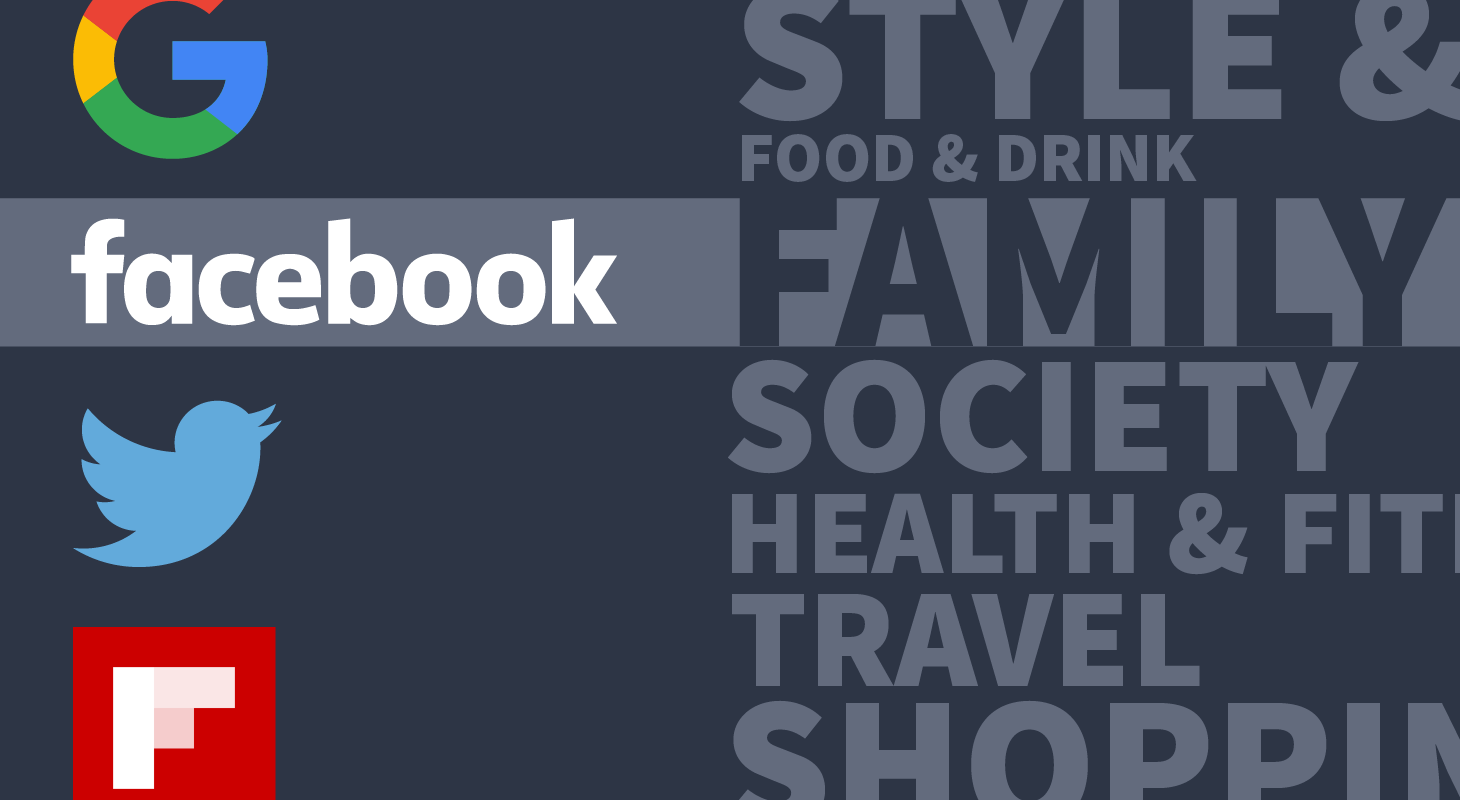 Last year, based on a study of a data set spanning 2016, we learned that Facebook refers the vast majority of readers (87%) to lifestyle articles. But since then, there’s been a significant reversal in duopoly trends as Google search surpassed Facebook in sending more traffic to our network. And earlier this year, the platform announced changes to its algorithm.

With all of these changes, we wanted to explore what people are most likely to pay attention to when they’re on Facebook. This new study of referral traffic data from April — May 2018 showed readers are still accessing lifestyle content primarily through Facebook—and that’s about the only kind of content with the platform as a primary referrer.

Audiences find lifestyle content through Facebook more than any other topic. In particular, Family & Parenting related content stood out for having the highest percentage of external traffic come from Facebook: 70% of those readers found it originally on the social networking platform.

The trends in what kinds of content Facebook readers care about most point to changes in the audience and the platform itself.

The categories of articles Facebook readers care about most 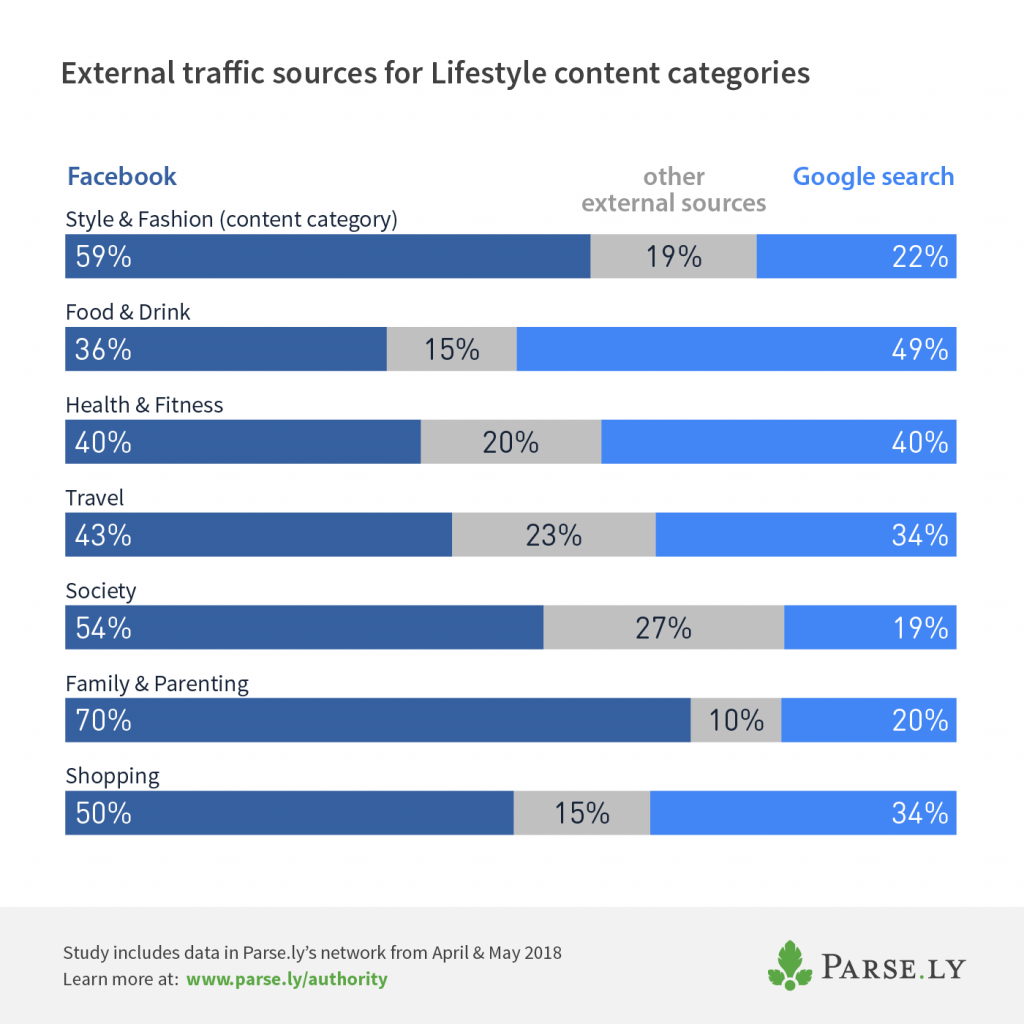 Other categories had a more balanced distribution of referral sources, such as Health & Fitness, which had an equal percentage of traffic from each member of the duopoly. Only one lifestyle category, Food & Drink, received a majority of its readership through Google search. 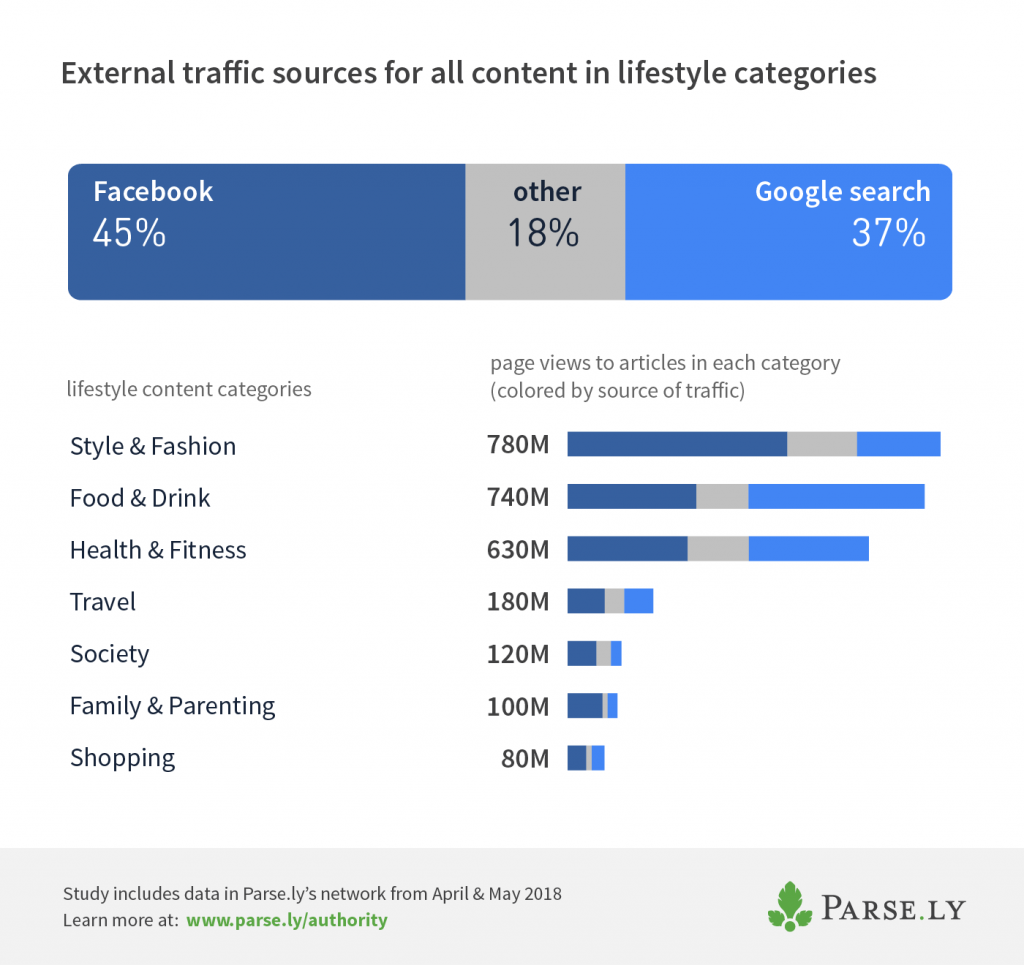 The only other categories that a greater share of referral traffic from Facebook than Google and fell outside the lifestyle grouping were:

Shoutout to all the moms and dads on Facebook

So where have all the Facebook users gone and why are the readers who stuck around interested in lifestyle content? Two factors that seem likely are shifts in user demographics and the platform itself.

In 2017, 2.8 million U.S. users under 25 left Facebook, according to data from eMarketer. A study by the Pew Research Center found that 68% of adults use Facebook, while only half of teens do, preferring YouTube, Instagram, and Snapchat.

This rings true based on the high percentage of traffic to the Family & Parenting category. Family & Parenting stories seem more likely to resonate with the older demographics who use the platform the most. With its new parenting subscription product, The New York Times may want to recapture that momentum.

User experience, controversies surrounding fake news, privacy concerns, or a multitude of other factors could be to blame for a dip in Facebook traffic across categories. But it’s also possible that many users aren’t gone so much as the algorithm change prioritized posts from their friends and family and “meaningful interactions” over content from brands and publishers.

As Sarah Marshall, head of audience growth at Vogue International, points out in a guide to growing a Facebook audience, there are two kinds of shares: when a brand page posts a link and a reader shares it; and when a reader finds the link to a story elsewhere (email, messaging app, Twitter feed, etc.) and posts it to her page.

Marshall notes: “Since the major algorithm change announced in January, the second type of share has become particularly important as this is about organic sharing between friends, an action Facebook promotes.” Perhaps when lifestyle readers discover an article about a travel destination on Flipboard or a new recipe on Pinterest, they’re eager to share these stories with their Facebook friends, driving more traffic back to publishers than a brand page post about another topic that doesn’t surface as readily in the new algorithm.

Abandon ship or hoist the sails?

Brands and publishers operating in one or more of these lifestyle verticals have questions to consider. With so much traffic coming from one platform, is it risky to remain dependent on it for referral traffic?

It could be that many publishers already took the advice to focus on diversifying traffic sources after the algorithm change—or just as a natural course of action. Exploration of other platforms, according to Rithesh Menon, VP of Account Management & Monetization at GOOD Worldwide Inc, “is driven by a question of what’s next. It’s looking for new trends in audiences; it’s not a reaction to Facebook’s algorithm change.”

But for those in the lifestyle space who are starting to think about diversifying traffic, those readers are present on other platforms, too.  The combined referrals from external traffic sources other than Google search and Facebook increased roughly 3% from 2017 to 2018.

Take the Society and Health & Fitness categories for example. Pinterest is the third highest referrer after the duopoly to Society content, which revolved around the royal wedding during the time frame we studied, according to the top topics. Flipboard drives 2.7% of traffic to Health & Fitness articles, with Twitter close behind. Understanding where readers are finding and consuming content in your vertical can help uncover new opportunities or make the case to devote more resources to platforms where you already have a presence.

On the flip side, knowing the audience is there, does it actually make sense to further tailor content and distribution strategy to Facebook? It could be that lifestyle publishers have found their niche on the platform. By comparing their own data to the category benchmark, they may find that they have an opportunity to double down.

To learn more about how readers are accessing content that corresponds with their various interests, download the full data study with benchmarks for 23 content categories here. 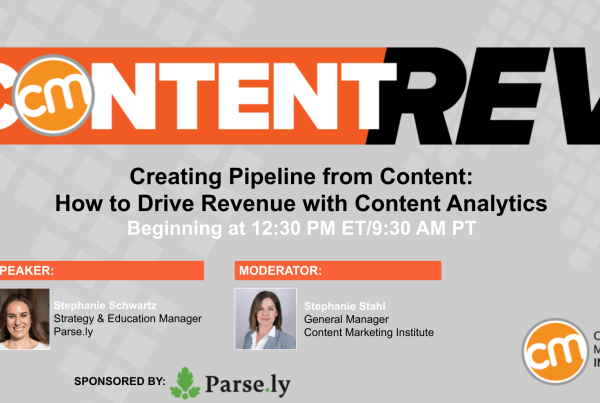