A Different Way — Thoughtful Financing, Or Why We Said “No” to a Lot of Money

Home » A Different Way — Thoughtful Financing, Or Why We Said "No" to a Lot of Money 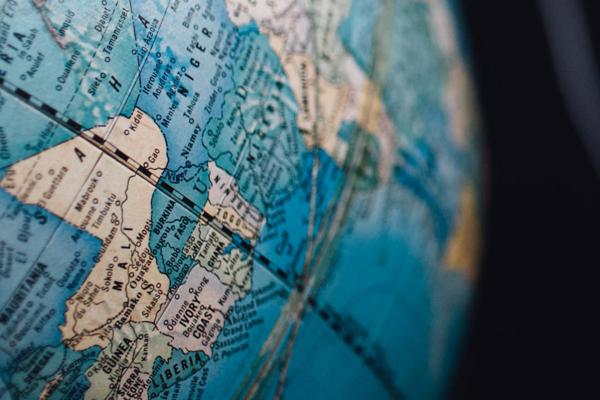 I felt pretty good at the start of 2017. My company, Parse.ly, had just executed its best quarter without exploding expenses. We’d built the business to a point where we effectively had unlimited runway to stay the course and still grow. However, coming off of such a successful year made me realize how much more we could do. 2016 gave us a taste of how impactful launching new products and working with differentiated customers could be for our business. We’d only scratched the surface. I knew what we had in the bank wasn’t going to be enough to capture the full opportunity in the market. We needed to fundraise if we wanted to accelerate our momentum.

I know I’m preaching to the choir when I say fundraising is hard; the numbers are against us. Mattermark found that on average, just 17% of companies that raise a Series A go on to raise a B and that number dwindles to 0.3% for later rounds. While raising capital is hard, there’s an emerging debate as to whether growing your business organically from customer revenue is even harder. The founder of Basecamp lambasted the VC market for misalignment with entrepreneurs, suggesting the market was architected with few windows for success, instead encouraging growth at all costs.

My co-founder  and I think about this a lot. We’d seen unicorns rise and fall. We saw employees left with nothing but tax burdens even when there is an on-paper-only outcome for the company. We knew of huge capital raises with lack of diligence on the actual products, e.g. Theranos.

We also saw the positive angles: investors pouring money into startups to fuel innovation through deep R&D and solidify a product in a “winner-take-all” market (consider that some of the best performing and largest public stocks in the past year are Apple, Microsoft, Facebook, Google, Netflix, & Amazon — all heavily VC funded at some point).

When we went on the road to pitch Parse.ly, investors on the east coast circuit were amazed at how much we’d grown the company with a smaller $6 million Series A in 2013. Despite strong, sustained business growth many told us they wouldn’t be able to invest in our next round. We scratched our heads: “why?” The answer was always the same: “You’re not raising enough.”

We were curious how serious they really were, so we went down the “how much can we raise?” rabbit hole. We found ourselves with offers for more than $40M, 8x what we needed.

The idea of deploying $40M was exciting, to be sure, but it was also a head scratcher. Why were these funds pushing for more than we needed?

As Eric Paley said, “Venture capital is a hell of a drug.” But in the end, we just said “no”. We needed growth capital, but not that much. The whole experience led us to wonder: were they looking to drive the valuation up based on capital deployment?

To figure it all out, we dug deeper on the data.

While we said “no” to the cash, we wanted to know: what, exactly, was driving this capital heavy mindset?

Our answer: the tech ecosystem has been hit by a tidal wave of money that’s flooding the market. 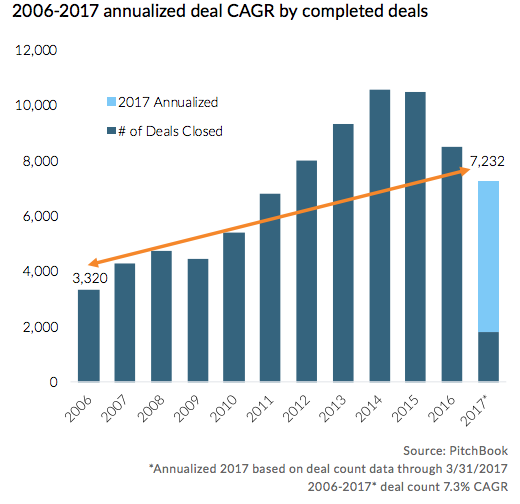 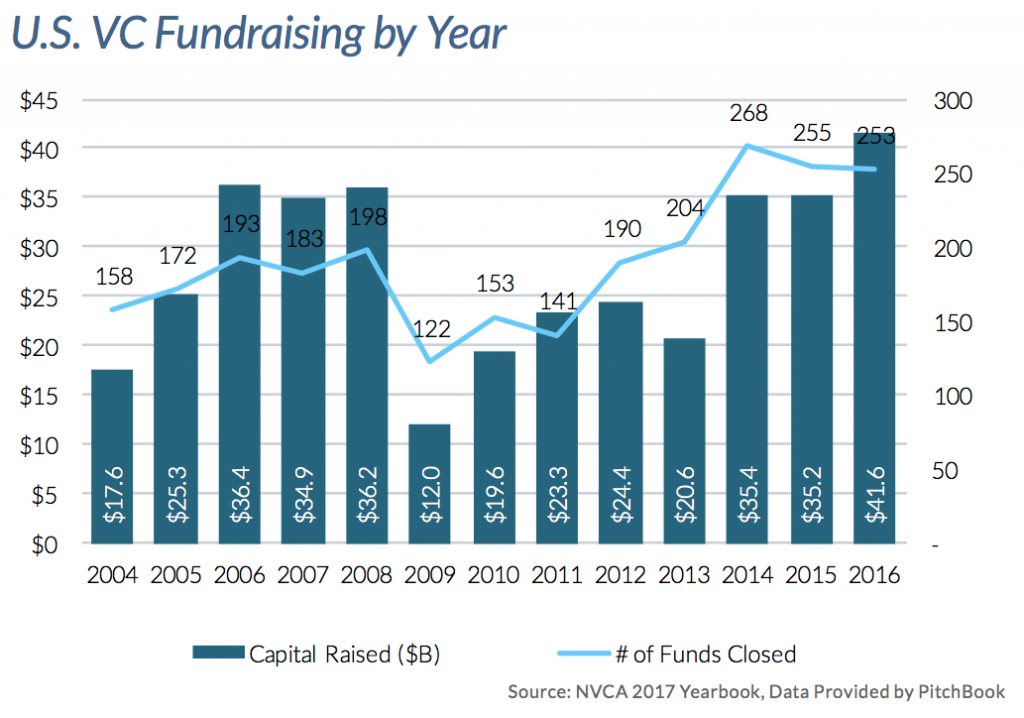 Though the number of deals have dropped significantly, investors have more money than ever with 2016 representing the most funds raised for VCs in over a decade. 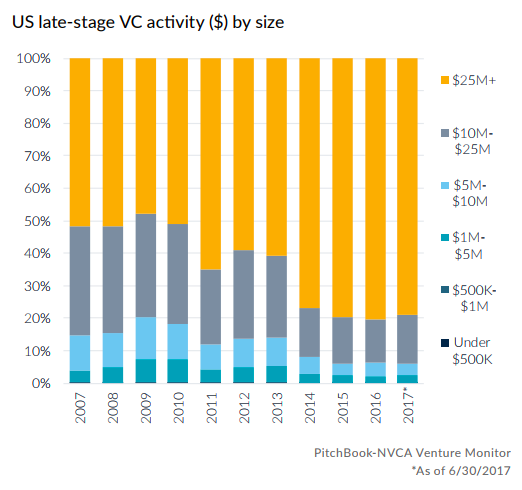 As a result of fewer deals, and more funds, deal sizes have ballooned with late stage VCs.

It’s no wonder startups are raising capital at a record pace. The money is out there. And investors feel the pressure to use it or lose it.

We explored every angle for how Parse.ly could deploy $20-40M strategically. With each offer, we found ourselves spending time looking at how we could justify spending a huge amount of money rather than what would work best for our business. We’ve always considered capital restriction to be an exercise in focusing the company, and doubling down on what’s working. That approach has helped us prioritize and kept the company finances healthy.

Startup unicorns aren’t a myth. But, the idea that you need huge sums of money to become one is.

With profitability in place, we didn’t see a reason to put the company into a deep expense hole when revenue growth could be pursued efficiently. That’s the power of the SaaS business model; it’s predictable. We could see a near future where both profitability and growth were realized.  Taking a large raise would shoot our common share price up dramatically and employees would be forced to foot a large tax bill to exercise and might never recoup that; for an example there, check out what happened with Good Technology.

From studying the data, this much is clear: VCs are cash-rich right now, and it’s affecting startups. It pushes companies to raise more money than they actually need. Their viewpoint is, if VCs focus on writing bigger check sizes to companies that have a conceivable path to $100M in annual revenue, then they can put their capital to work “efficiently”. But that efficiency is self-defeating: writing bigger check sizes doesn’t, in itself, put that capital efficiently to work. It might, instead, breed company inefficiency.

When too much is too much

As enticing as a massive balance sheet is, we knew we had to say no. The problem was that we didn’t have any alternatives.

Parse.ly’s high revenue made our valuation “too rich” for small-check-size investors and our low capital requirements meant we couldn’t meet ownership targets for traditional growth-stage investors.

So, we took our dilemma back to Parse.ly’s board members, two of whom immediately looked at each other and said, “Wait a second — are we over-thinking this? I bet there’s enough money around the table to give you what you need.”

I actually face-palmed in the meeting.

The most obvious solution had been sitting in front of us all along.

Our existing investors knew our business better than anyone. They understood how we were able to scale revenue and product on a lean budget. While they’d seen other SaaS companies come and go since our 2013 Series A, Parse.ly maintained rapid growth. And as it turned out, not only was there enough money to meet $5M in financing, most all of our past investors wanted to double-down. As a result, we ended up raising $6.8M.

So, we said no to $40M and raised a $6.8 million Series B from existing investors, instead.

We’re using this raise to add capacity across the board, and to create a small buffer. Just before this round closed, we hit profitability. But the margin isn’t huge yet and we know an external downturn could negatively impact all the Parse.ly customers who rely on our product everyday. Our company exists for them and now they can rest assured that it will be secure in spite of broader economic conditions.

But, here’s the part I’m most excited about: experimentation. Parse.ly has one of the most valuable Internet data sets in existence. Our software understands, at a deep level, what billions of Internet users read, watch, and share. We regularly use this data to map out content and media trends, but we’re ready to bring this capacity directly to our clients, giving them the ability to move from descriptive analytics to predictive analytics.

Parse.ly is in it for the long-haul. We’re here for our customers. Our mission that was once to build the best content analytics has evolved. Parse.ly exists to change the way people think about the value of attention. We are up for the challenge and we’re excited by what’s to come.

P. S. As the need for capital shifts relative to what investors want to deploy (read The Rise in Non “VC Compatible” Companies), there’s going to be more companies looking for a solution to the problem we ran into in the space. There’s definitely a market for this new type of VC. You’ll have a higher success rate with your capital deployment, and may not need unicorns to have a fund that has sizable returns. As an example, I like what Bryce Roberts at indie.vc is doing here.