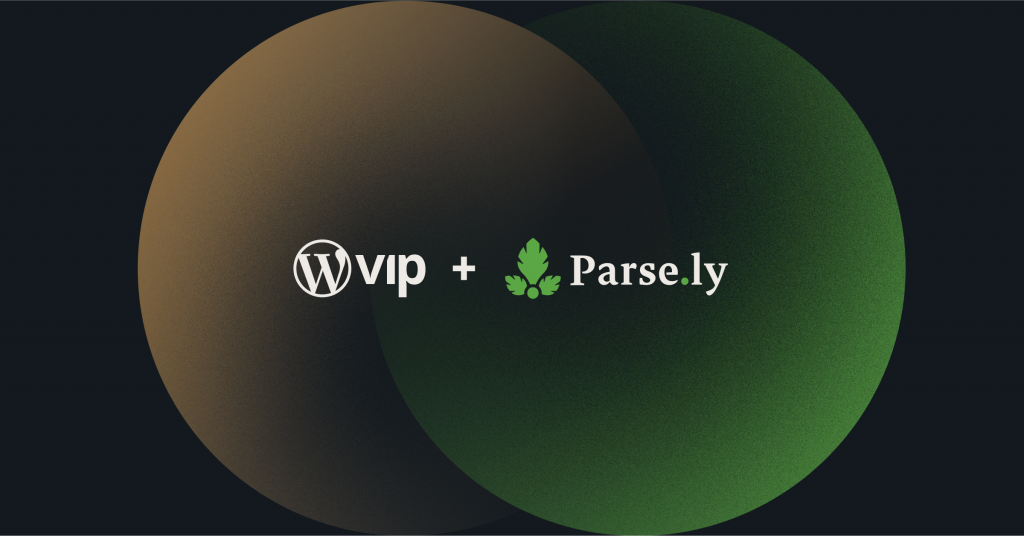 Today we’re pleased to announce that Parse.ly will be joining WPVIP, the leading provider of enterprise WordPress and part of Automattic’s suite of innovative brands. Everyone at Parse.ly is coming over to WordPress VIP and we will continue on our mission of helping customers prove the value of their content. This also marks a new era of customer and product growth for Parse.ly. Here is why we’re so excited to share this news.

For years, Parse.ly has been on a mission to showcase digital content’s power to influence and change the web. We did this through our widely-used content analytics system that helped the biggest and best sites/apps achieve breakthrough growth, engagement, and loyalty.

We’ve worked with organizations across Media, Entertainment, E-Commerce, Financial Services, Professional Services, Non-Profits, Tech, and more. We’ve sold to Fortune 100 companies, and across every continent (except Antarctica; we haven’t cracked that one yet). And we’ve worked across content teams, marketing teams, product teams, and data teams with titles ranging from C-level executive to copywriter to data scientist.

As we continued to uncover ways to demonstrate the value of content, though, we’ve realized that getting closer to where the content lives was critical to unlocking that value. As a result, we built deep integrations with some of the top CMS companies and projects out there. The most ubiquitous integration was WordPress, the open source CMS that powers 40%+ of the web. We were introduced to the WordPress VIP team, and began to learn about how they support their customers (including many joint customers) through an agile content platform.

Parse.ly & WPVIP, together, will modernize, change, and accelerate the content industry to unlock the innate power of content for all organizations.

Parse.ly’s open source WordPress plugin is already the most popular way to deploy Parse.ly to websites. And we have lots of ideas for how Parse.ly’s dashboard and API can improve enterprise WordPress sites. But, that’s not the only (or even the primary) place we’ll be innovating in 2021 and beyond. Our desire was always to make Parse.ly the top content analytics system on the market, and solve key real-time and historical analytics needs for editors, journalists, corporate marketers, and content marketers alike.

With investment from the WPVIP team, and with wider product innovation support from the Automattic team, this dream will be a reality. You, our customers and prospective customers, will benefit directly from this investment.

You may be wondering, at this point, “if Parse.ly is joining Automattic and WordPress VIP, what does that mean for me, if my site isn’t actually powered by WordPress?” Don’t worry, we’re dedicated to continuing to support you in all the ways that we have.

WPVIP is Automattic’s enterprise SaaS software division, and with the Parse.ly acquisition, they are expanding their commitment from supporting premium WordPress-based content management to the much wider market of digital experience, across all content platforms.

For WPVIP, content management is only one part of this much wider digital experience market. In the same way that you can use Adobe Analytics (formerly Omniture) without using Adobe CQ or Experience Manager (AEM), Parse.ly users can use our product without using WordPress or WordPress VIP.

With the addition of Parse.ly, WPVIP now offers a way for any site or app, running any CMS (or even several CMSes), to utilize a best-in-class content analytics system. As a customer, regardless of whether you’re running WordPress or not, Parse.ly will continue to get active, CMS-agnostic development and support.

What’s more, WPVIP has a talented and motivated enterprise support team. Thanks to this deal, Parse.ly will be able to provide even more attentive white-glove support to our enterprise customers, regardless of which CMS they happen to run.

Over a decade ago we founded Parse.ly with a simple concept in mind: “Build the company that we’d love to work for.”

This mantra, though not a business idea itself, was the guiding principle of the decisions we made at Parse.ly. From financing and business models, to culture and operating principles, we knew that creating an environment for our employees to thrive would be critical to our success. One of these operating principles was to run as a fully distributed team, which we have now done successfully for over a decade. But another was to grow our SaaS business with a focus on delivering long-term customer value at every stage, rather than merely chasing growth at all costs. As founders, we believed that one of our core duties was to create an environment that lived up to the expectations that we had for ourselves. The right thing to do for Parse.ly, our team, and our customers wasn’t always the easiest option.

What we didn’t know, though, was that there was a company already out there that was operating with these same long-term principles: Automattic.

The founding story, the dedication to an open web, the commitment to democratizing publishing and the principled approach to company management — these were all amazingly in-sync with Parse.ly. Not only were the operating principles aligned, but really, Automattic represented the company that we aspired to become.

Collaborating at scale for a better open web

The full Parse.ly team will now join the larger WPVIP team, itself a part of the larger Automattic, a company that has scaled to over 1,300 employees. “Automatticians”, as they (and we!) are called, live and work in 77 countries, and speak 99 different languages. They have also scaled several iconic internet businesses including WordPress.com, JetPack, Tumblr, and WooCommerce.

Automattic, like Parse.ly, is a fully distributed team, and has operated that way for many years. And, just like Parse.ly, it’s a team on a mission to support the open web.

WPVIP applies these open web principles to solve business problems for content teams across the enterprise. Parse.ly will join them to deliver the canonical content measurement and optimization approach to all companies.

Given this scale and mission alignment, we could not have imagined a better company to collaborate with on this exciting next stage of Parse.ly growth.

This milestone would not have been possible without the support of our colleagues, our customers, our investors, and our advisors. We’ll continue to lean on you for guidance moving forward. But we can’t thank you enough for all that you’ve done to get us to where we are today.

As we like to say in our sales calls: “we’re more than a decade in, but we’re just at the tip of the iceberg for how content can transform your business.” We’re in it for the long haul, and we’re excited to continue our journey to unlock the true value of content for companies around the world.