Media Coverage for Amazon Prime Day: Worth the Hype?

Home » Media Coverage for Amazon Prime Day: Worth the Hype?

Amazon Prime Day is not likely to become the biggest shopping day of the year any time soon, but Amazon’s marketing team certainly created a lot of buzz around the manufactured “holiday” on July 15.

Although the company isn’t releasing exact sales numbers, Amazon has decided to make Prime Day an annual event based on its initial success. At Parse.ly, our interest was piqued.

We decided to track the number of posts that mentioned  “Black Friday,” “Cyber Monday,” or  “Amazon Prime Day” across more than three million articles from our network of 350+ digital publishers to find out if Prime Day was as popular as Amazon contends. 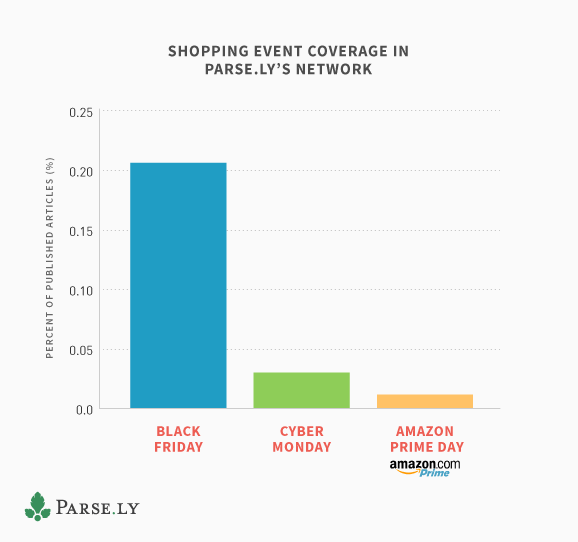 Unsurprisingly, Black Friday was mentioned nearly 17 times more than Amazon Prime Day in digital media. After all, it would have been nearly impossible for Prime Day to be mentioned more often than Black Friday, which is widely acknowledged as the beginning of the Christmas shopping season and the most profitable shopping day of the year for retailers.

Next year, Amazon’s focus should be on improving the sentiment of these articles. Many customers took to social media to express their outrage over the limited inventory and low-quality items for sale. Based on the numbers, it looks like the company surpassed expectations in marketing but offered up a sub-par experience — a classic marketing mistake.

Check out some of the more hilarious responses to Amazon Prime Day sales.

Did it pay off in retail?

So, what would it take for Amazon Prime Day to truly match the power of Black Friday and/or Cyber Monday? Parse.ly created a ratio of media articles to estimated revenue to help us figure out the true value of media coverage for this type of event. According to the National Retail Association, overall spending during the four days from Black Friday to Cyber Monday reached $50.9 billion. During those four days, Parse.ly found a total of 703,500 articles about Black Friday and Cyber Monday in our network of digital publishers.

If sales could be directly attributed to media coverage (remember, this is just a hypothetical), each article is roughly equivalent to around $72,352 in sales. That’s some amazing publicity!

We know that there were 36,600 articles in the media about Amazon Prime Day. That means that Amazon would have had to draw in more than $2.6 billion to achieve a similar sales-to-coverage ratio experienced by Black Friday and Cyber Monday.

Let’s narrow this down to online-only sales. Parse.ly learned that Cyber Monday reached $2.038 billion in desktop online spending in 2014. Applying the same ratio of media articles to estimated revenue for online-only shopping, we figured that Amazon would have to sell $845 million worth of products on Prime Day to match the caliber of Cyber Monday, alone.

Did Amazon Prime achieve $845 million in sales? What about $2.6 billion? Although we may never know for sure, we do know that’s a lot of merchandise for an online “garage sale.”

Did you cover Amazon Prime Day? Tweet us your articles @parsely!

Parse.ly analyzed more than 3 million articles from our extensive network of digital publishers to see how many times the top shopping days of the year were mentioned in the media during the one month prior to their occurrence (see a breakdown below).