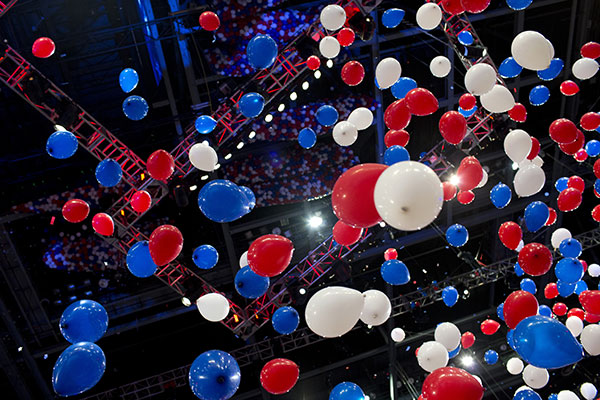 The nominees for President of the United States have been selected, the parties have convened, and the general election debates are a few weeks away, so we wanted to check in with the Parse.ly election dashboard to see where the candidates stand with online readers. While the long and unpredictable U.S. election cycle may have many newsrooms straining to keep up, we wondered if readers were showing signs of fatigue. We also wondered if the post-convention polls showing a lead for Hillary Clinton were causing readers to tune out from the lack of a tight race? Our election dashboard, backed by page view data from hundreds of top news publishers, says reader interest in the candidates remains strong and is increasing as the presidential campaign continues into the fall. Go to the Election Dashboard

Predictably, both party conventions generated significant spikes in page views for posts covering the party’s respective candidate. But the increase in page views was not just a result of an increase in articles being written about the candidates around the conventions. The number of page views per post also increased in the last four months of the campaign. And breaking from Parse.ly’s initial observations on candidate coverage, publishers may now be justified in producing more than twice as many articles about Trump compared to Clinton. As shown in the chart below, Donald Trump is now receiving more page views per post than Clinton. These last four months mark a reversal of the slight lead Clinton had in page views per post from earlier in the presidential campaign. The increase in reader attention during the party conventions generated roughly 150 million additional page views for Clinton and Trump in the Parse.ly network of publishers. And the general trend of page views without the convention bump remains positive despite the slump in the latter part of August (likely a result of peak vacation season). Most notably, page views to posts about Donald Trump peaked both during the Republican National Convention and after the Democratic National Convention. The second peak in Trump’s page views is most likely a result of articles covering Trump’s controversial remarks about the Kahn family who spoke out against him at the DNC. Readers were clearly primed for articles surrounding the conventions, and the Kahn story likely extended their interest well after the balloons dropped from the ceiling.

Before the national conventions, the previous peak in traffic for candidates was centered around the primary debates and initial primary voting. Given the contentious campaign and the limited opportunities for the candidates to meet face-to-face, we expect the upcoming general election debates to generate peaks that rival those in the primary and conventions. Journalists should take a post-convention breather to get ready for the final stretch, because readers are paying attention to the campaign now more than ever.

Check out our interactive graph now