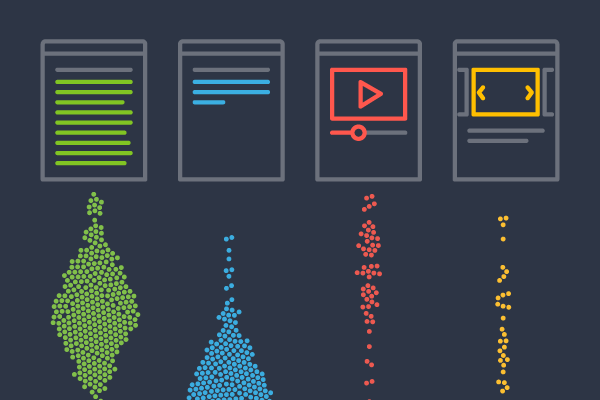 Just because advertisers are eager to pay for video doesn’t mean that readers are ready to watch it; in fact, it is entirely possible that video won’t save the day for digital publishers looking for growth. Time will tell — but until then, data can help point us in the right direction.

Media companies need to find out what their audience actually responds to: What types of content are their readers most engaged with? How do Facebook and Google perform as referral sources for each type of post? Which post format is most attractive to new visitors? Returning visitors?

Parse.ly’s latest Authority Report takes a closer look at the success of video and other common media formats — including short-form, long-form, and slideshows — to see if the overall impact of a piece of content is connected in any way to its layout. Here’s what we learned.

Slideshows are a Cost-Effective Alternative to Video

One of our more interesting findings is that slideshows tend to bring media outlets the most Facebook traffic of any other content format. This contradicts a common misconception among digital publishers that slideshows are virtually unshareable because they provide a poor reader experience.

It seems unlikely that readers suddenly want to be “forced to look at the friend’s vacation photos on a slide projector,” as a Digiday article from 2013  once described slideshows. However, even as publishers move beyond the pageview as a golden metric, they’re still finding that slideshows can be  valuable in presenting information to readers — and readers are responding in measurable ways.

As the production costs of a slideshow are typically lower than those of a video, the findings of our Authority Report suggest that slideshows are a cost-effective alternative to video for publishers who are looking to expand beyond text-only content.

In May 2015, Pew Research Center reported that long-form stories attract visitors at nearly the same rate as short-form stories. Yet, readers spend about twice the time with long-form news content on their cellphones versus short-form content.

These findings are consistent with our Authority Report, where we learned that long-form posts drive engagement and appear to be a good source of growth for digital publishers. Long-form content attracts new readers to online media sites via Google and keeps them engaged nearly twice as long as normal articles. Digital publishers looking for new visitors can invest in developing long-form content to attract and engage readers. Interestingly enough, video appears to be the least engaging of all media formats in our investigation. Perhaps this is because video takes longer to load, so bounce rates are higher and average engagement times drop.

Of note:  Most publishers have an average engaged time between 40 and 60 seconds, but this number is dependent on their industry. If you are  interested in more detail about engaged time by industry, check out a recent blog post we wrote on the topic.

Do you want to take a look at the full Authority Report? Complete the form below and we’ll send it to you via email.