As an analytics provider for hundreds of the web’s leading publishers, we have a bird’s-eye view of trends in web-wide news consumption. This vantage revealed an industry-wide shift in how readers find news in June 2015. Facebook overtook Google as the most important traffic source for publishers. And then, for two years the situation remained a stable duopoly, with Facebook and Google each sending publishers around 35% of their identified external referral traffic.

However, in May and June we started hearing increased reports from our customers that their Facebook traffic was declining at an alarming rate. While we observed a minor dip in Facebook traffic, it was too early to make any judgement about whether the trend would hold. Many factors lead to short-lived fluctuations in Facebook referral volume, including seasonality and Facebook’s constant tweaks to its News Feed algorithm. There are also changes that publishers make, such as curating their Facebook pages, creating more video content, or integrating with Facebook Instant Articles, Facebook’s mobile news standard.

But after six months of steadily declining numbers, we’re now announcing that the decline is significant, and that it has, indeed, affected most of our publishers. Comparing data from February 2017 to October 2017, we have witnessed a 25% reduction in Facebook referral volume. The chart below shows that since June, we’ve seen a fairly steady decline, albeit with a few bumps. The chart is based on a fixed set of approximately 600 publishers who were Parse.ly customers throughout the period.

Note that in the same period, traffic from Google increased, so it’s also hard to argue that visitors have just lost interest in finding news on these sites. 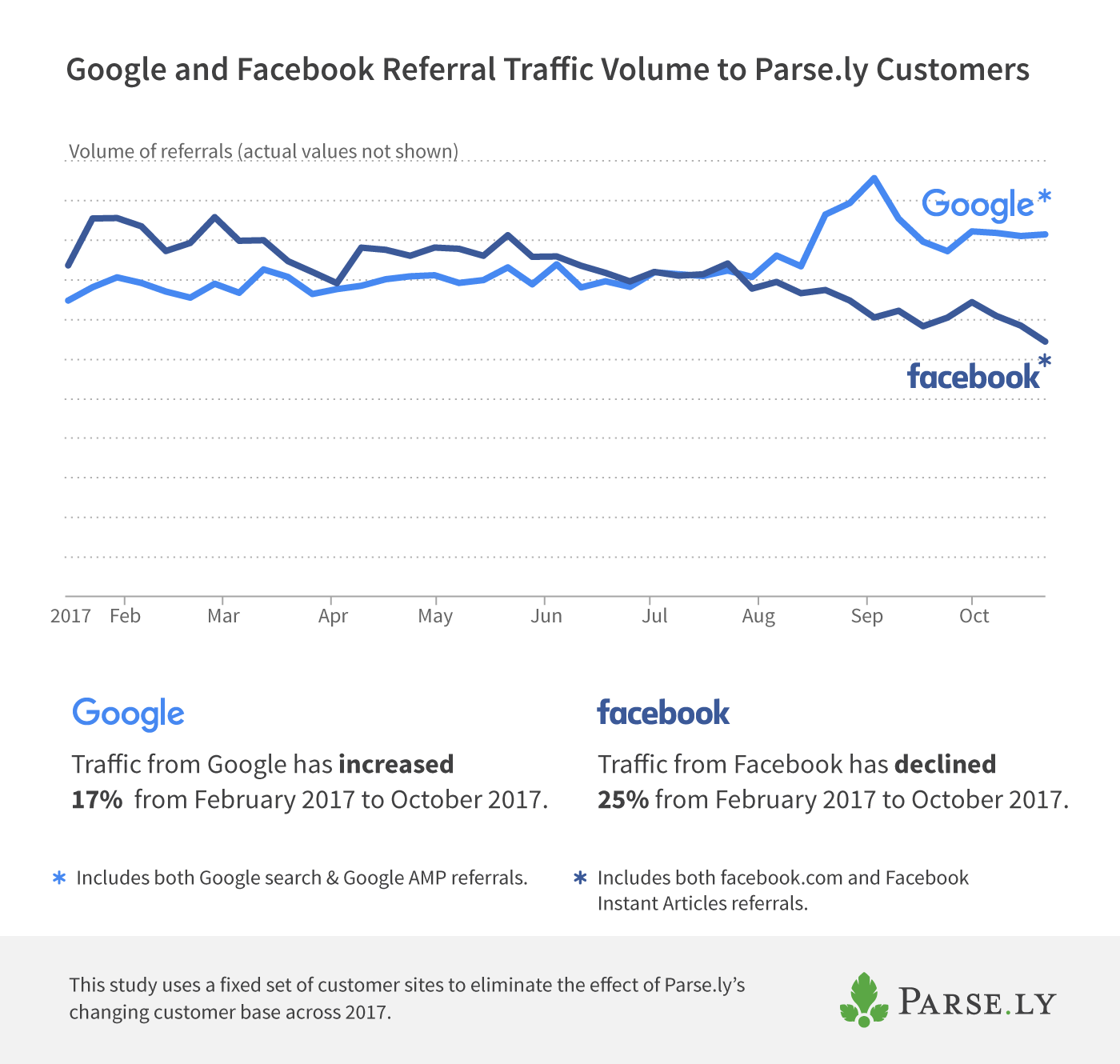 The decrease has not affected all publishers equally. Some have seen huge drops in Facebook referral traffic, while others have seen an increase in the same period. The distribution, shown in the chart below, also reflects how far from the industry-average individual sites can be. 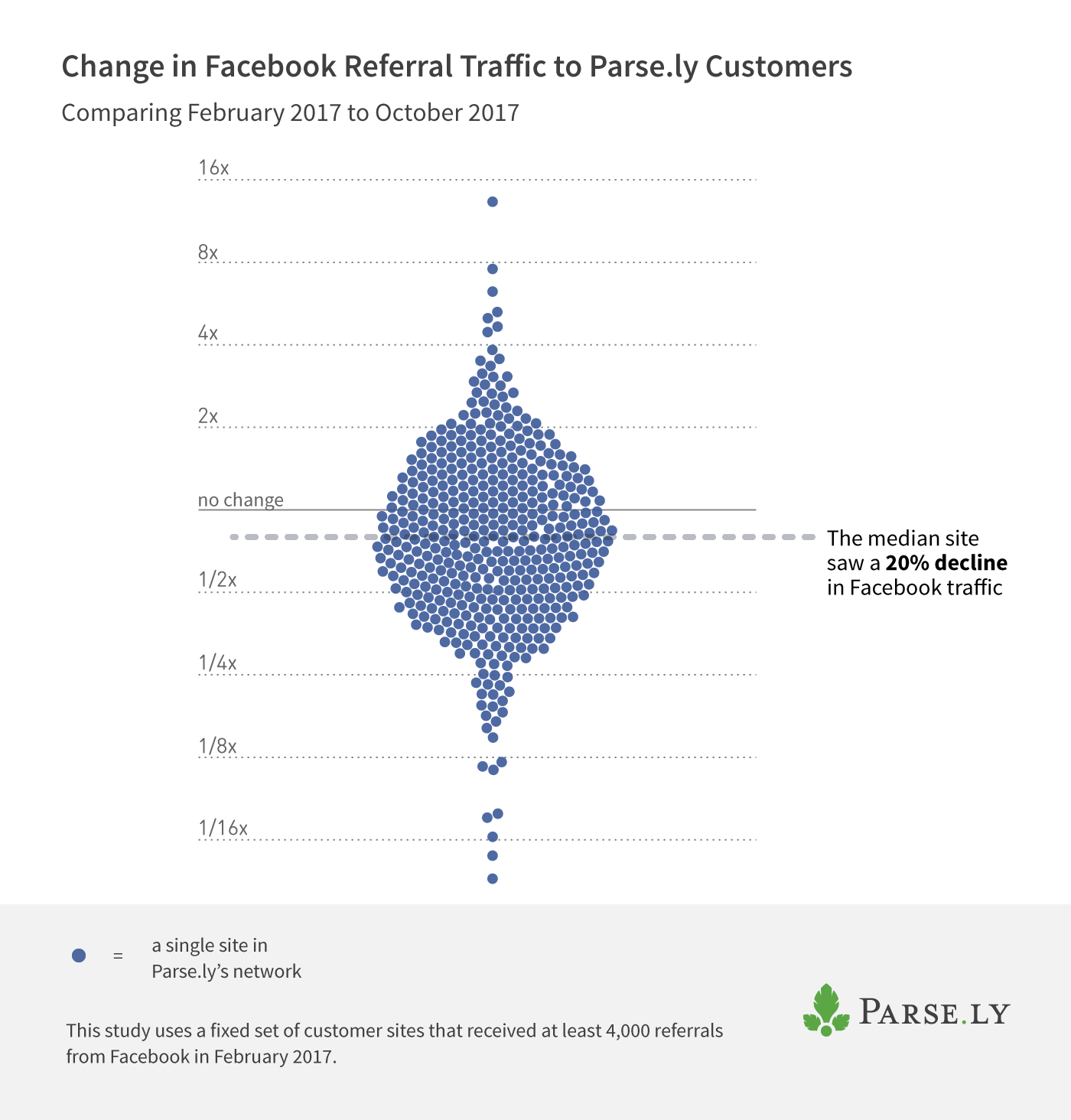 Two-thirds of the publishers saw a decrease in referral traffic over this period while the remaining one-third saw an increase. For half, traffic decreased a substantial 20% or more, and for one in five of our publishers, Facebook referral was volume cut by 50% or more.

What explains this drop? Facebook rolls out changes to its News Feed algorithm incrementally, which makes it difficult to attribute a decrease in traffic to a particular change. We don’t see an immediate spike or dip on the day a change is announced, so we can only speculate about what caused the drop. Taking a look at recently announced changes to this algorithm, there are several that could be responsible for news articles appearing less frequently in Facebook users’ news feeds. For example, on June 30th, Facebook announced it had reduced the exposure given to accounts with high post volume. In fact, the majority of news feed changes announced in 2017 center around either removing clickbait, fake news, or spammy news sources.

In the aftermath of the 2016 U.S. Presidential election, Facebook has been increasingly criticized for its role in distributing fake news, so it makes sense for them to focus on news quality. However, it could be that even established, reputable publishers have suffered as a by-product. Any site using a paid analytics solution (which is what we are) isn’t likely to be in the spam business, but both high-quality journalism and spam could potentially be hurt by changes rolled out by Facebook.

However hard it is to attribute changes in referral volume to a News Feed algorithm adjustment, there is one change for which we can see strong supporting evidence, and it’s one that publishers should note. On August 2nd, Facebook announced that the algorithm would prefer articles with low page load times. Facebook’s Instant Articles program is specifically designed to address mobile page load times. Even while overall Facebook referral volume dropped by 25% from February to October, the chart below shows that traffic on Facebook Instant pages remained steady. 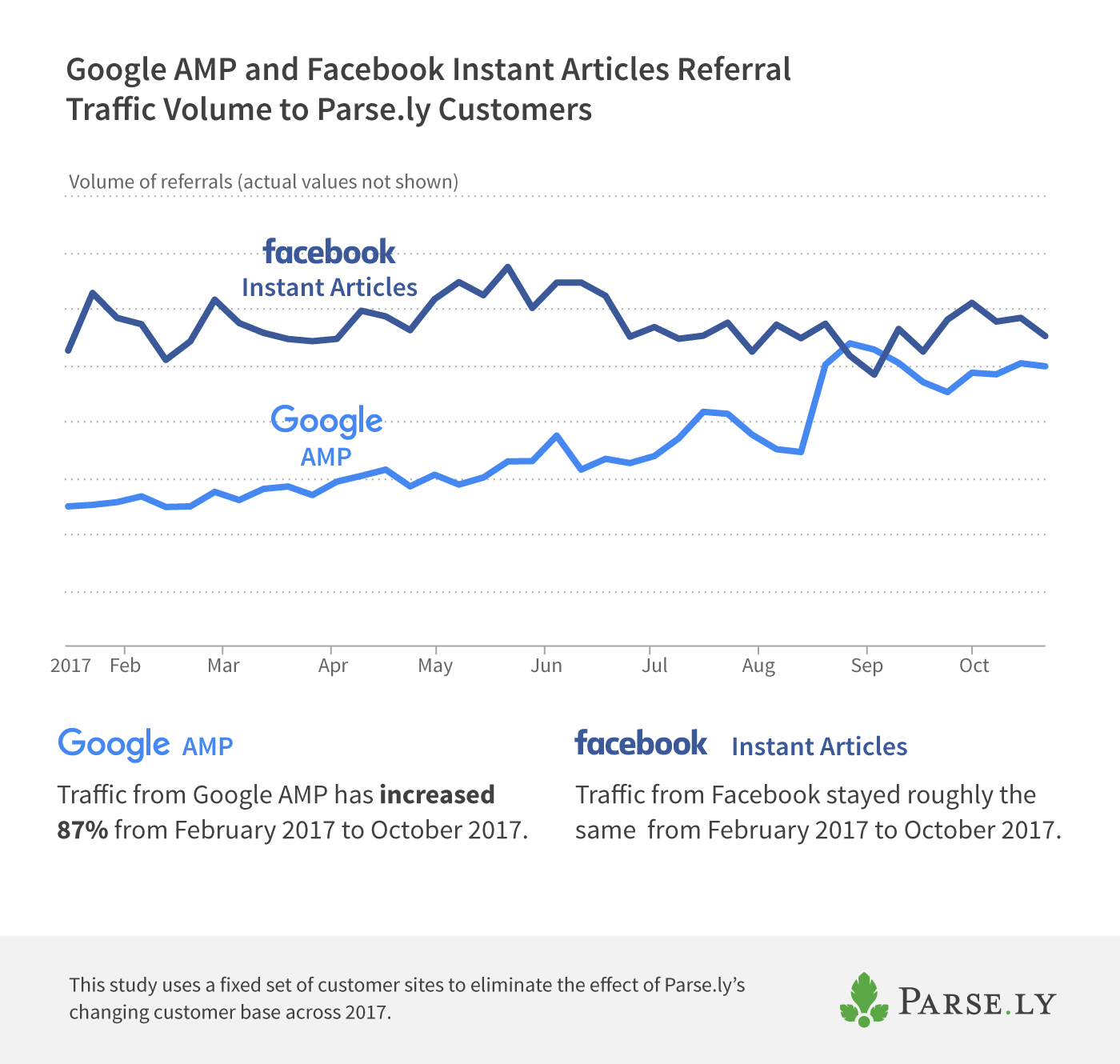 The significant decline in Facebook’s referral traffic to publishers highlights the dangers of relying too heavily on any single platform for readers. Over the last few years, many ‘social first’ publishers emerged and some of them successfully attracted large audiences by tailoring their approach to the rapidly growing Facebook user base. This approach recalls the ‘search first’ strategy that some publishers pioneered more than a decade ago. Such a specialized strategy can be effective for quickly building up a large audience while competing against heavyweight incumbents who lack platform-specific focus. It may also seem like a safe move because platforms like Google and Facebook encourage and support these publishers through projects like Facebook’s Journalism Project and Google’s News Lab. Their support makes sense, because content tailored for their platform helps them fulfill their core goal: create a good experience for their users.

However, publishers must bear in mind that this core goal of a good user experience can cut both ways. If Google or Facebook decide that the way their users find news articles leads to a bad experience, then they will shake things up, potentially at the peril of publishers. We saw this with the 2011 Google Panda algorithm update, which cracked down on sites that Google had declared to be web spam, but which also had wide-reaching effects on all site operators. We’re seeing it now again, more dramatically, with Facebook. For publishers who have cultivated a healthy mix of referral sources from search, social, aggregators, and their homepage, the decline in Facebook traffic will be painful but solvable through a strategy update. For publishers who have specialized solely on writing viral Facebook articles, the crisis may be more existential in nature.