Paid, owned, and earned media: What’s the difference and how to track them?

Home » Paid, owned, and earned media: What’s the difference and how to track them? 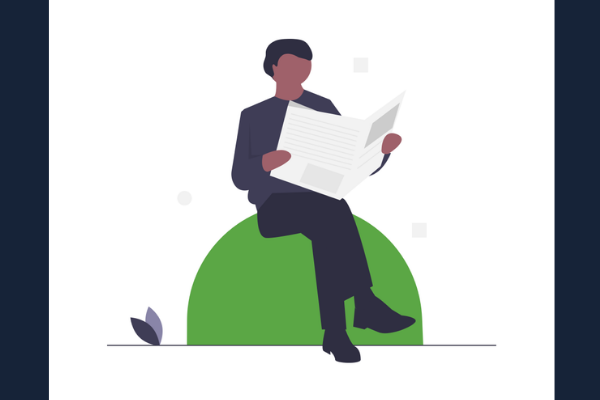 If you want to maximize the reach of your content marketing efforts, you need to diversify those efforts to make sure you’re hitting all the right angles.

How can you do that? Well, you need to have a working knowledge of owned, earned, and paid media — three different types of media that can boost your content marketing efforts in unique ways.

Once you have that working knowledge, you can properly execute paid and owned media initiatives while recognizing how much earned media you receive. The best and brightest marketing minds know just how impactful these three types of media can be. We’re here to make sure you know exactly what they are and what they can do for you.

What is paid media?

Definition: Paid media is any paid advertising initiative executed by a company.

The example below, from 3D printing company Formlabs, shows a Google search ad. If you type in a specific keyword — the company name in this case — this result will show up first on Google. That’s not by accident, of course. Formlabs has paid Google to rank first for that particular branded keyword. Every time someone types in their company name on Google, Formlabs wants to ensure they’re always the top search result.

Companies bid for keywords that later become the basis for Google search ads. Naturally, the more competitive your keyword of choice is, the more it’s going to cost you. A keyword like “furniture” shows an ad from Wayfair as the top result on Google. It’s safe to assume, particularly in such a competitive industry, that Wayfair paid quite a bit to get that ad in the top slot for the “furniture” keyword.

Paid media can help your company reach a wider audience through ad initiatives that can generate more exposure than you would receive organically. Companies typically use paid media to boost their promotion efforts to ensure as many eyes as possible see their content.

It’s also an excellent option for businesses in crowded industries where large-scale exposure may be difficult to come by. A lot of companies trying to compete with established brands in their industry will use paid media as a way to fast-track brand awareness and engagement. This is why you often see the same company with recurring ads on YouTube — they’re paying for that exposure.

How to track paid media

Paid ads are specific to different platforms. For example, you can use Google Ad Manager for Google Ads, Facebook Ads Manager for Facebook Ads, LinkedIn Marketing Solutions for LinkedIn, etc. Most platforms have their own ad manager that lets you create customized ads. You can often track the analytics for those ads through the corresponding platform ad manager as well, as this Facebook Ads example illustrates:

If you want to track how influencer content is performing, for example, you need to make sure you get the influencer you’re working with to create regular reports that contain specific information you’ve requested. If the influencer is creating a Facebook campaign, for instance, you need to ensure they send you the relevant reports from that specific platform with data from Facebook Insights.

What is owned media?

Definition: Owned media is any type of content that a company creates, owns, and maintains.

Using Formlabs again, the example below shows their company blog — which is a type of owned media. Formlabs operates this blog and shares industry-related articles on it. It’s hosted on their website, which they own and maintain themselves. 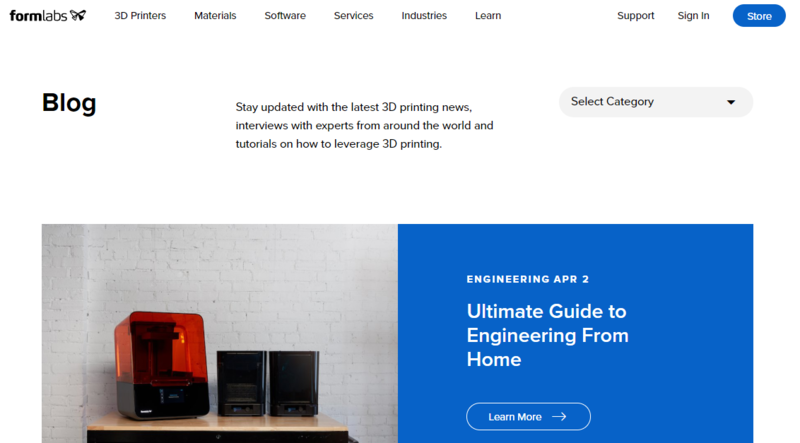 Owned media allows your company to control its corporate narrative. By doing things like publishing regular blog posts or sharing information organically via different social media channels, your company has full control over what content reaches your audience.

Without any owned media, your company won’t have a digital footprint and zero homegrown content to share. Owned media should be the very first type of media that your company invests in with a long-term focus on building it out.

There’s also a distinct cost benefit to having owned media. It’s far less expensive to produce and maintain your owned media than paid media, for example. With much lower overhead, your owned media is also easier to revise if changes are needed. You can generally add or remove elements of a website or blog at a low cost (or sometimes no cost), but changing direction halfway through a paid media campaign will cost a lot.

How to track owned media

You can use Google Analytics to track general website metrics like pageviews and bounce rate, and then use a tool like Parse.ly for more specific content engagement metrics such as total engaged minutes and average engaged minutes. The better you understand how people are engaging your owned media, the more time and effort you can put into creating content your audience wants. If you see that an article for a particular topic is receiving a lot of average engaged minutes, that can drive your decision to create more content in a similar vein.

What is earned media?

Definition: Earned media is any content about your company that is organically shared by people outside of it.

The example below shows a Twitter user sharing their thoughts on a webinar hosted by Formlabs. It highlights how useful the webinar was and puts Formlabs in a positive light that will be seen — and potentially shared — by whoever comes across that Twitter user’s page.

Another important part of this piece of earned media is the resulting interaction between Formlabs and the Twitter user. Formlabs thanks him for attending, and the Twitter user reaffirms how interesting the webinar was, saying he’s shared the link with others. Those kinds of organic company champions are crucial in driving Formlabs’ great reputation in their industry. 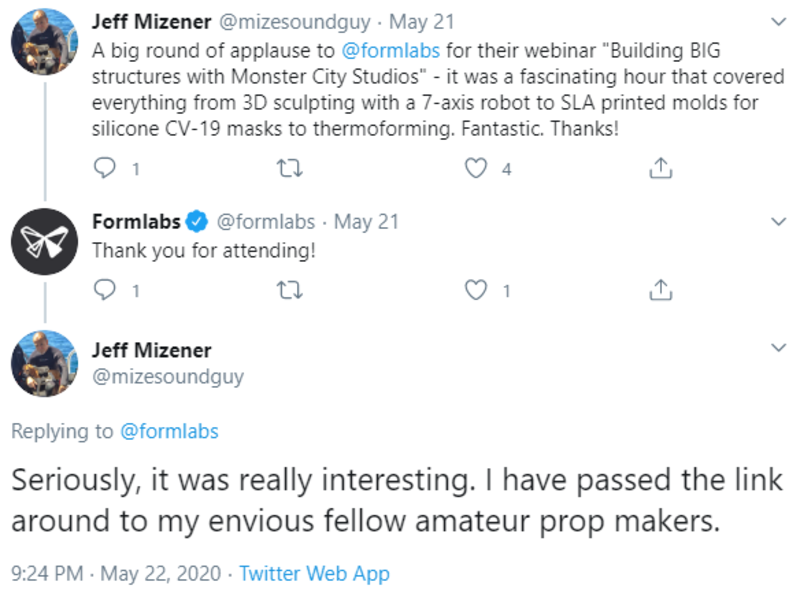 Earned media is integral to your reputation as a company. The more outside exposure your company receives, the more brand awareness there will be. If your company is being regularly mentioned via social media, online articles, or YouTube videos, more people will recognize it. It’s also important to share earned media mentions with your audience so they can see your growth as a company.

Earned media can overlap with paid and owned media in some cases. For example, if a paid influencer you collaborated with shares a YouTube video that goes viral and your company is later covered extensively in the media as a result—that could be considered a hybrid between paid and earned media. The same idea applies to owned media. If someone organically shares your company blog and raves on LinkedIn about how great it is, that’s your owned media becoming earned media.

Earned media is synonymous with customer trust. Cision’s 2019 Global State of the Media Report found that only about half of consumers trust paid media, while 92% trust earned media. Praise from an unbiased source like a journalistic publication with established credibility is seen as more authentic than a paid promotion.

Generally speaking, B2C content is a better candidate for earned media. A content study conducted by Backlinko found that B2C content gets shared almost 10 times more than B2B content. While B2C brands have more general appeal to the average person, that doesn’t mean B2B content can’t have a high volume of earned media. That said, one of your goals when creating B2B content should always be to ensure it’s easily digestible for most readers, even if the topic is complex. This consideration can go a long way in getting other people and companies to share your content.

How to track earned media with Parse.ly

Social shares, for example, can be tracked using Parse.ly’s social referrals and social interactions functions. These functions not only tell you who likes, comments on, and shares your content, but also which social media channel these interactions are occurring on most often. 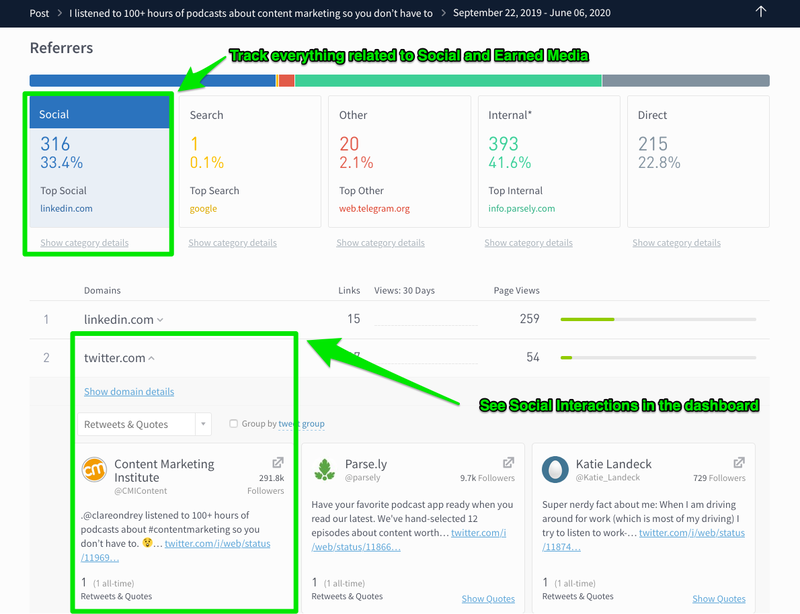 Evaluate your performance on social media and see social interactions in the dashboard.

If you find that a good chunk of your social referrals and social interactions are coming from a particular social media channel, such as Facebook, for example, you can even make the decision to invest in some paid media by setting up Facebook Ads that target specific users.

If you want to categorize your content more easily and effectively, Parse.ly’s “tags” function can help you segment different types of media so you can see how they performs over time. You can even track sponsored content campaigns for better, more efficient sales reporting.

Sign up for a free trial today to find out how Parse.ly can help boost your content marketing efforts.