Alerts in email, Slack, or wherever you’re at

By Melissa BierlyMay 21, 2019No Comments

Home » Alerts in email, Slack, or wherever you’re at

When we visit our clients’ offices, Parse.ly is usually up on big-screen TVs and second monitors.

“We’ve seen a story spike to multiple hundreds of people reading it. If you happen to be looking at Parse.ly when it happens, it’s really cool. People get excited,” said Leah Becerra, Regional Growth Producer at The Kansas City Star. 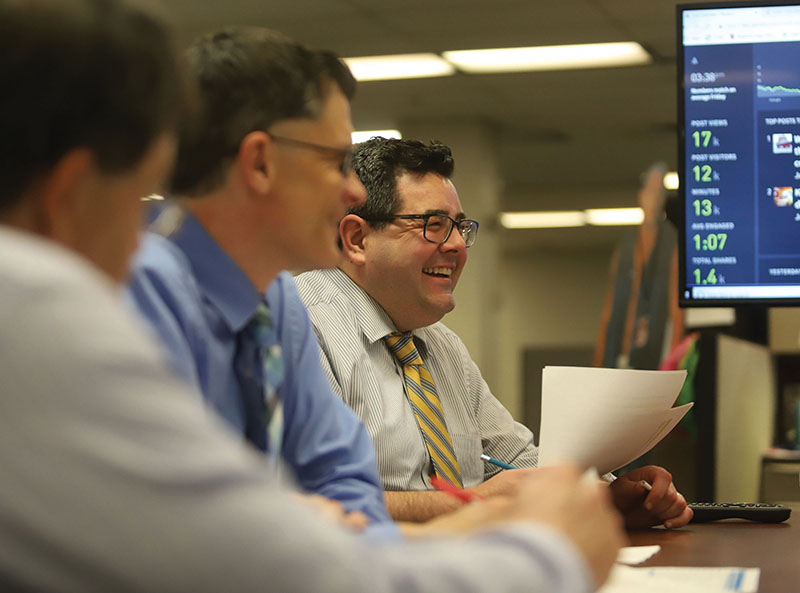 But even our most devoted data-informed users aren’t going to catch every post taking off. “If nobody happens to be looking at Parse.ly, then nobody knows to react to it,” continued Becerra. And that’s true for users who aren’t in Parse.y 24-7, too.

We’ve got good news for Leah and users like her: Parse.ly alerts are here! Now, when a story gets more attention than usual, you’ll get an alert and be able to react in real-time.

Read on to learn how to set up alerts for your team.

Setting up a Parse.ly alert
See just how big a story has become
What’s in an alert?
Adjusting alert frequency
Questions?

Setting up a Parse.ly alert

“It’s great to be immediately alerted, wherever I’m at,” said Adrian Ruhi, East Regional Growth Editor at the Miami Herald. “Knowing when a story is starting to perform really well allows our teams to jump on them to ensure headlines, photo and video placements, and links to other stories are in place.”

To set up an alert for yourself, go to Overview or an author or section details page and click the megaphone icon. You decide how you’ll get alerts: via Slack, email, mobile browser (i.e. on your phone), or web browser. 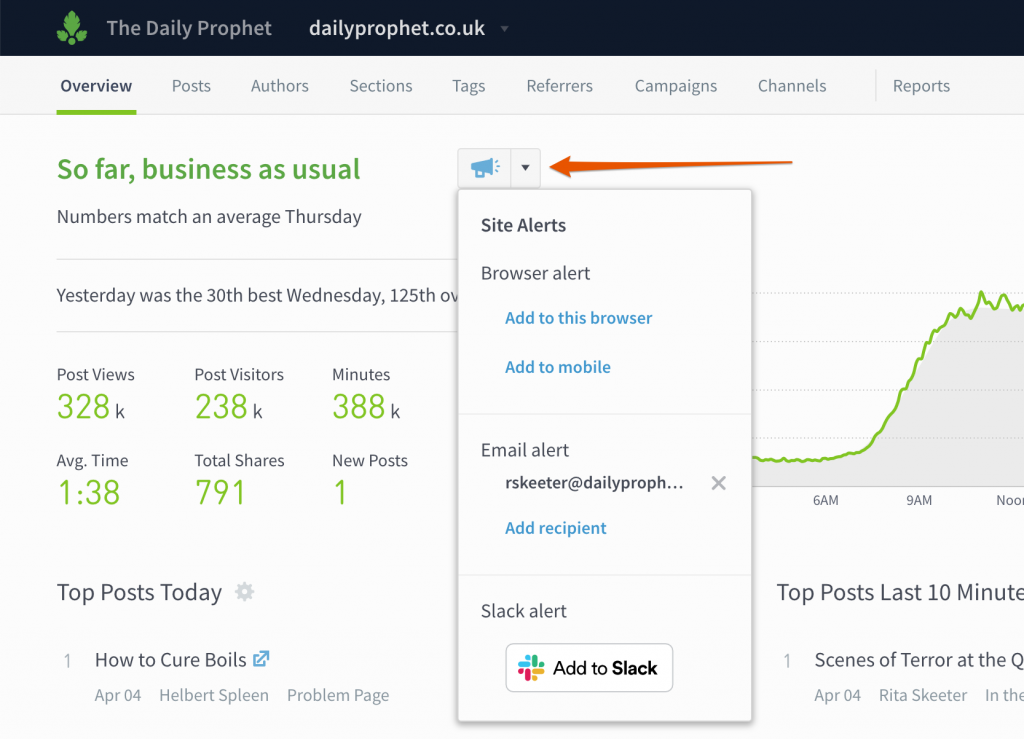 Patrick Crawley flies around the U.S. in his role as Director of Digital Programming for NFL Media. “I use alerts as a cheat sheet when I’m traveling for work. In the airport, I can just open Slack to check in and see which pieces of content are resonating more than others,” he said.

You can also decide what you’ll get alerts about. Set up alerts for your entire site, an author, or a section. Site alerts will show up whenever a post does better than posts across your site that were published in the past 90 days.

Meanwhile, if you’re a writer, you probably want to know just about your articles. Go to your author details page to set up an author alert for yourself. You’ll get an alert when your articles do better than most of your recent work, or most of the recent posts across the entire site. Same thing goes for section alerts. 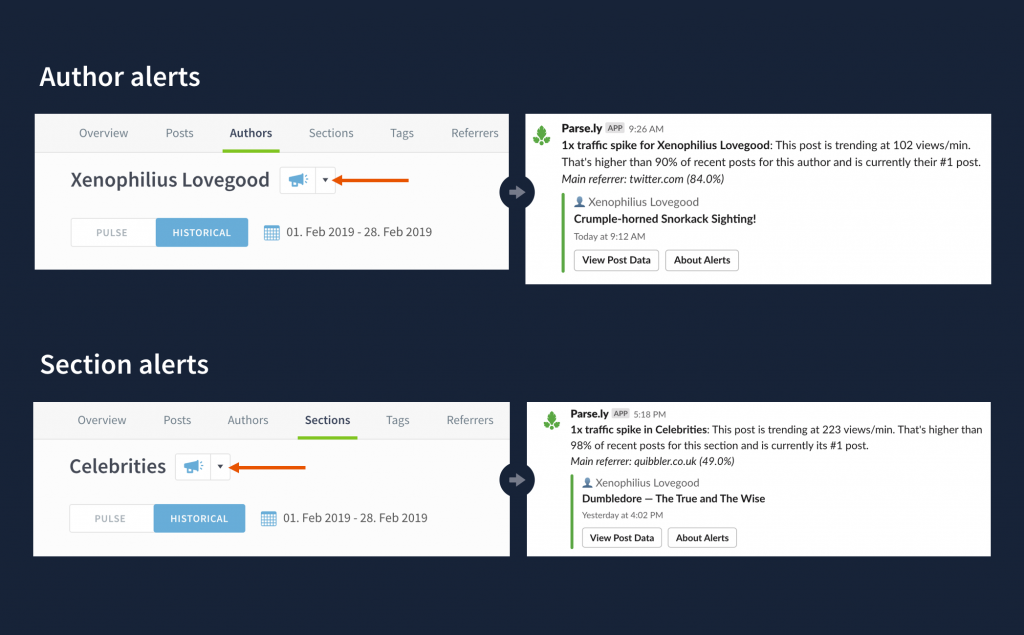 See just how big a story has become

Once you’ve had Parse.ly alerts set up for a few days, you might notice that they don’t just tell you when a story spikes. They tell you how much a story is spiking and if it continues to receive considerable traffic afterwards.

Crawley told us “Index scores in Parse.ly alerts help as a point of context for how people are paying much attention to the story. They help us paint a detailed picture of how popular the story was and how we should be reacting to news like this.”

While most posts spike and then dip off, some may steadily maintain a high number of page views per minute or revive several hours later. You’ll get alerted in both of these cases as well; those posts are prime candidates for further promotion on social or in newsletters!

What’s in an alert?

For our super detail-oriented users out there, let’s break down the components of an alert. The information included in an alert will depend on a number of variables (Was it sent because of a traffic spike or because a post revived? Is it for an author? Was it sent in the mobile browser?), but generally, Slack alerts have the most information in them; mobile and browser alerts have the least. 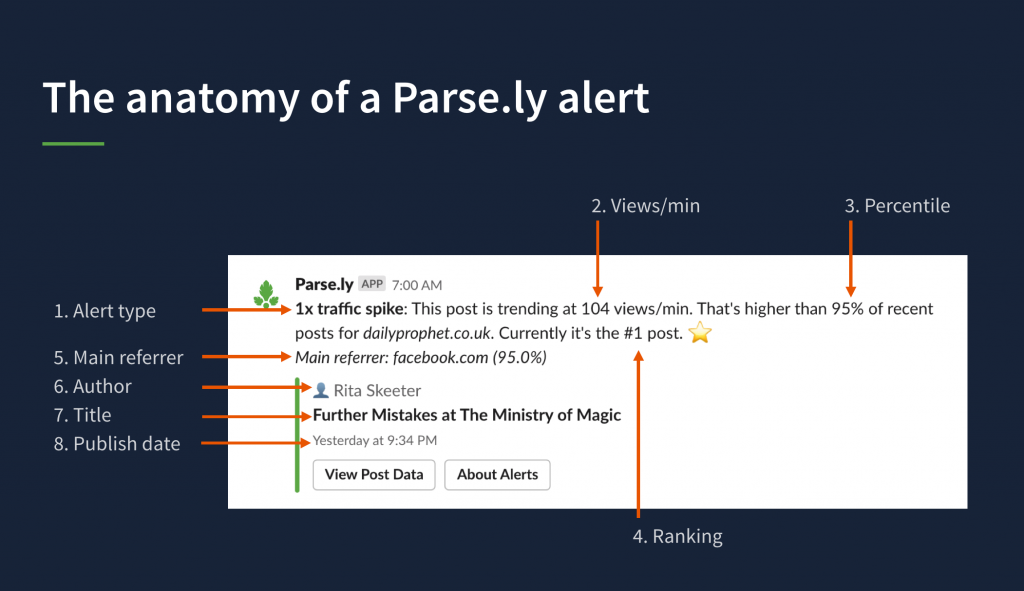 Ruhi finds the main referrer tidbit particularly useful: “Being shown who the top referrer is (and seeing the handy star rating in Slack) helps our newsroom make quick decisions.”

By default, site and section alerts are set to send when a post published in the last seven days gets more views/minute than 95% of the posts published in the past 90 days. Author alerts default to 90%. But because we know one size doesn’t fit all, we’ve made it possible to adjust the threshold of when alerts are triggered. Parse.ly admins can do this on the Alerts Settings page in the right hand drop down. 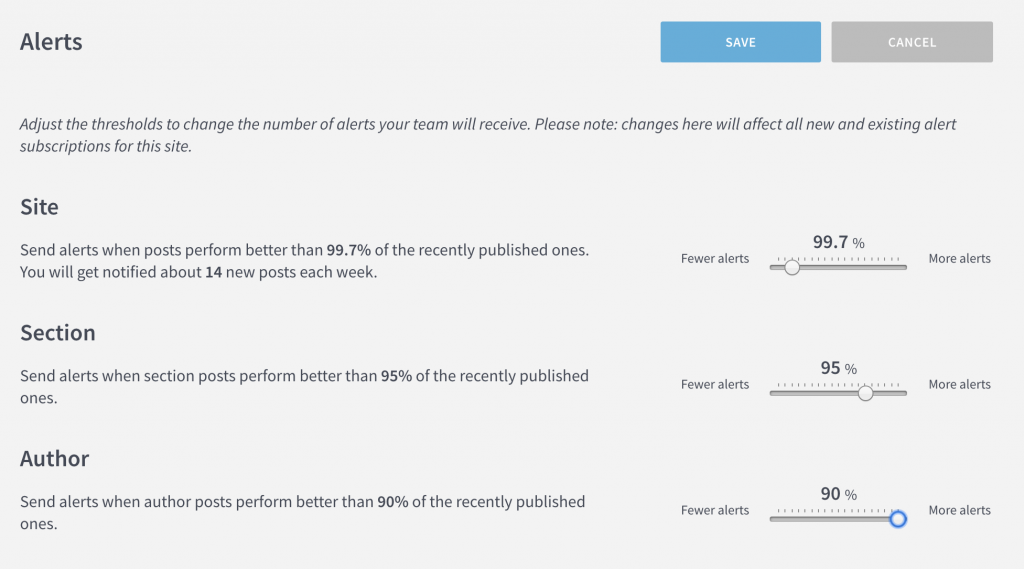 We couldn’t have built this feature without our customers. Thanks to the folks at McClatchy, The Ladders, the NFL, GateHouse Media, Conde Nast, Viacom, and A&E who helped us make alerts a reality with their honest feedback.

If you have more questions about how alerts work, check out this help doc.