The ultimate referral guide to your audience

Home » The ultimate referral guide to your audience 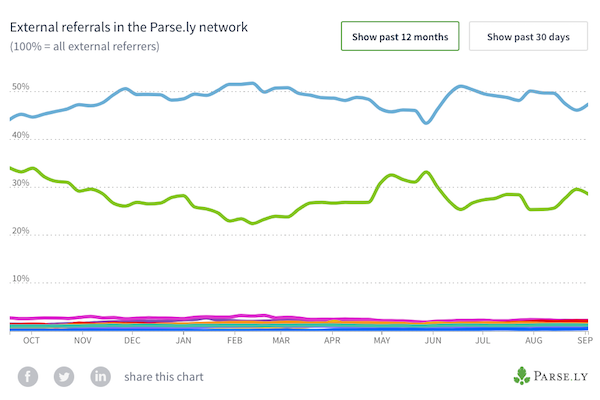 Remember the internet in 2015? Left Shark danced, we argued over The Dress, Hotline Bling went viral, and Adele gave us the record-breaking gift of Hello. Most notably (sorry, Adele) for content creators, it was a time when Facebook sent more traffic to publishers than Google.

It’s only been three years but the traffic trends of 2015 feel a far cry away from what we’re seeing today. Even before Facebook announced its algorithm change earlier in 2018, we saw a reversal in the duopoly: Facebook referral volume decreased by 25% from February to October 2017, while Google search referrals increased.

Facebook seems to be sending a message, as Joshua Benton writes for NiemanLab, that driving visitors back to publishers’ sites isn’t a priority for the company. Now in September 2018, Google sends about half of external referral traffic to publishers while Facebook hovers around 25% to 30%. 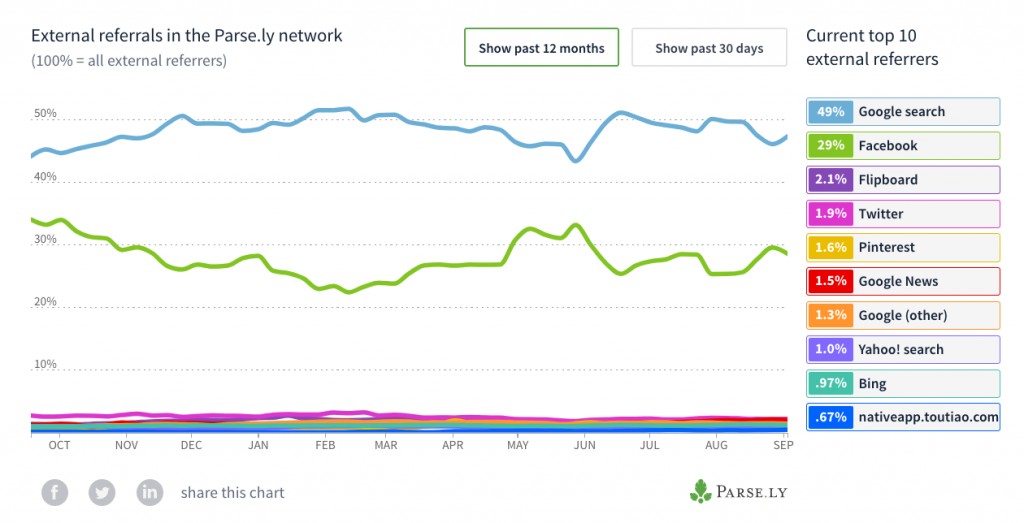 Which is all to say that things change, and they change quickly. If you’re trying to catch up on what referral trends have been over the last few years, where we’re at now, and what to expect next, here’s your ultimate guide to referral trends and benchmarks.

At the beginning of 2015, Google was the top external referrer to Parse.ly’s network. Then, in June 2015, a major shift: Facebook surpassed Google.

How long did it take before another shift with referrer traffic from the duopoly? Here are some key dates (and an incidental journey through the evolution of our graph styles) on the Facebook vs. Google timeline. 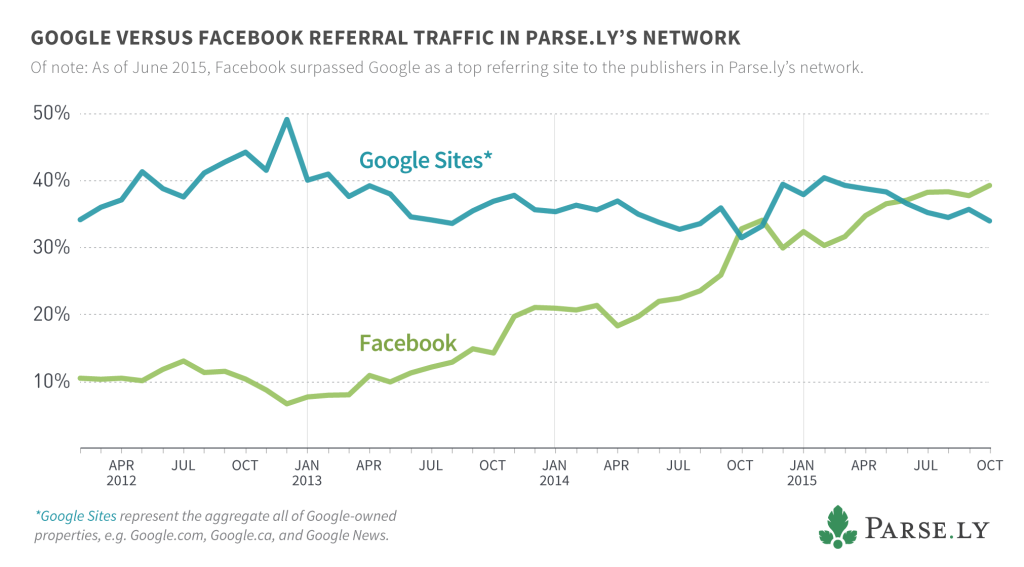 June 2016: Facebook changes its algorithm to surface more posts from users’ friends and family, but the platform still refers more traffic than Google. 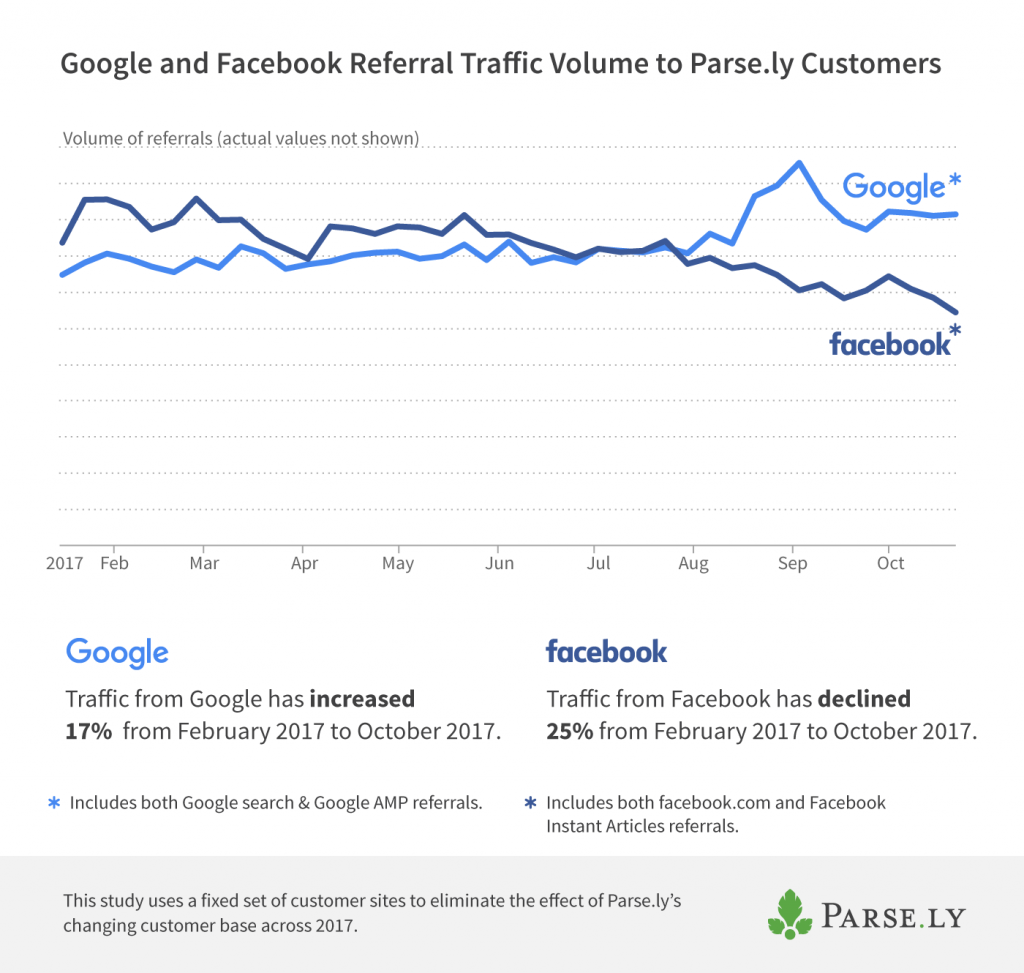 January 2018: Facebook announces another change to its algorithm that will “prioritize posts that spark conversations and meaningful interactions between people.” Even before the change, though, traffic was falling. 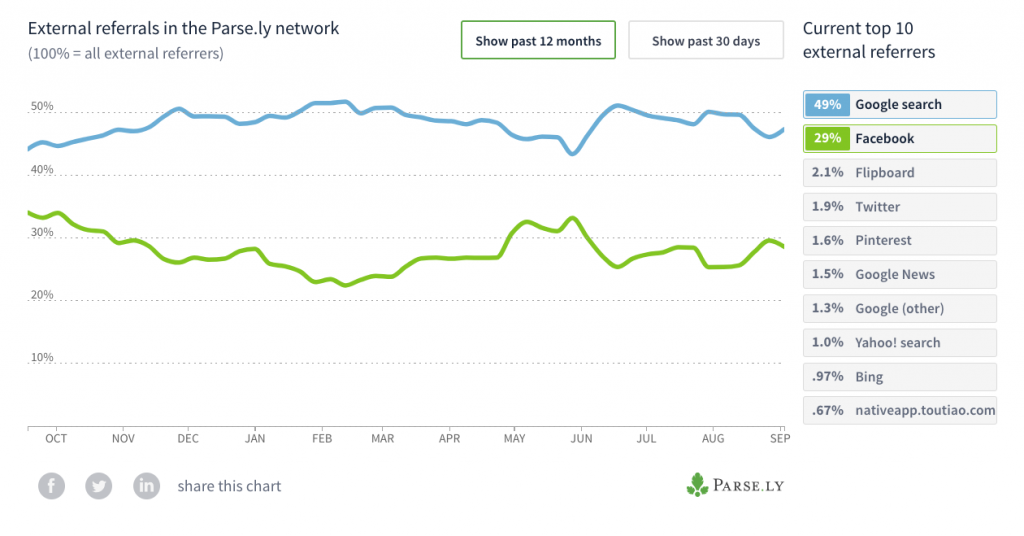 What played a role in the growth of Google as a referral source? One factor is Google Accelerated Mobile Pages (AMP).

2. Google surpassed Facebook in referral traffic, due in part to AMP.

Google rolled out AMP in 2016 with the aim to help publishers produce fast-loading mobile content, distribute easily on Google’s global cache, and support advertising models, subscriptions, and paywalls. Here’s the rundown of key dates regarding AMP (with help from the Tow Center’s amazing Platform Timeline) and how referral traffic trends fit into the timeline.

June 2016: Compared to non-AMP pages, AMP pages led to “higher viewability rates” for over 80% of publishers, Google reports. In other words, “speed matters.” 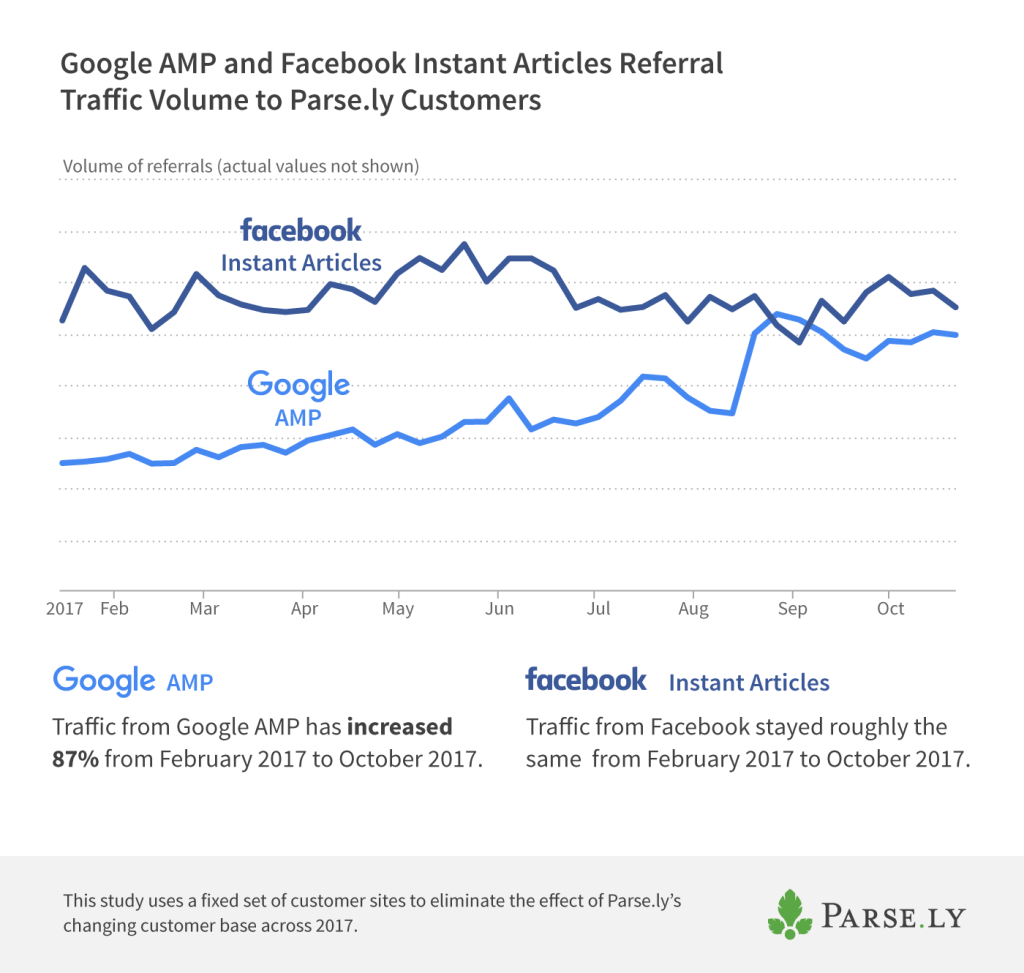 January 2018: AMP URLs will now appear under publishers’ URLs instead of the google.com/amp URL space.

March 2018: Google announces plans to apply the AMP framework to the rest of the web for instant loading of non-AMP pages. 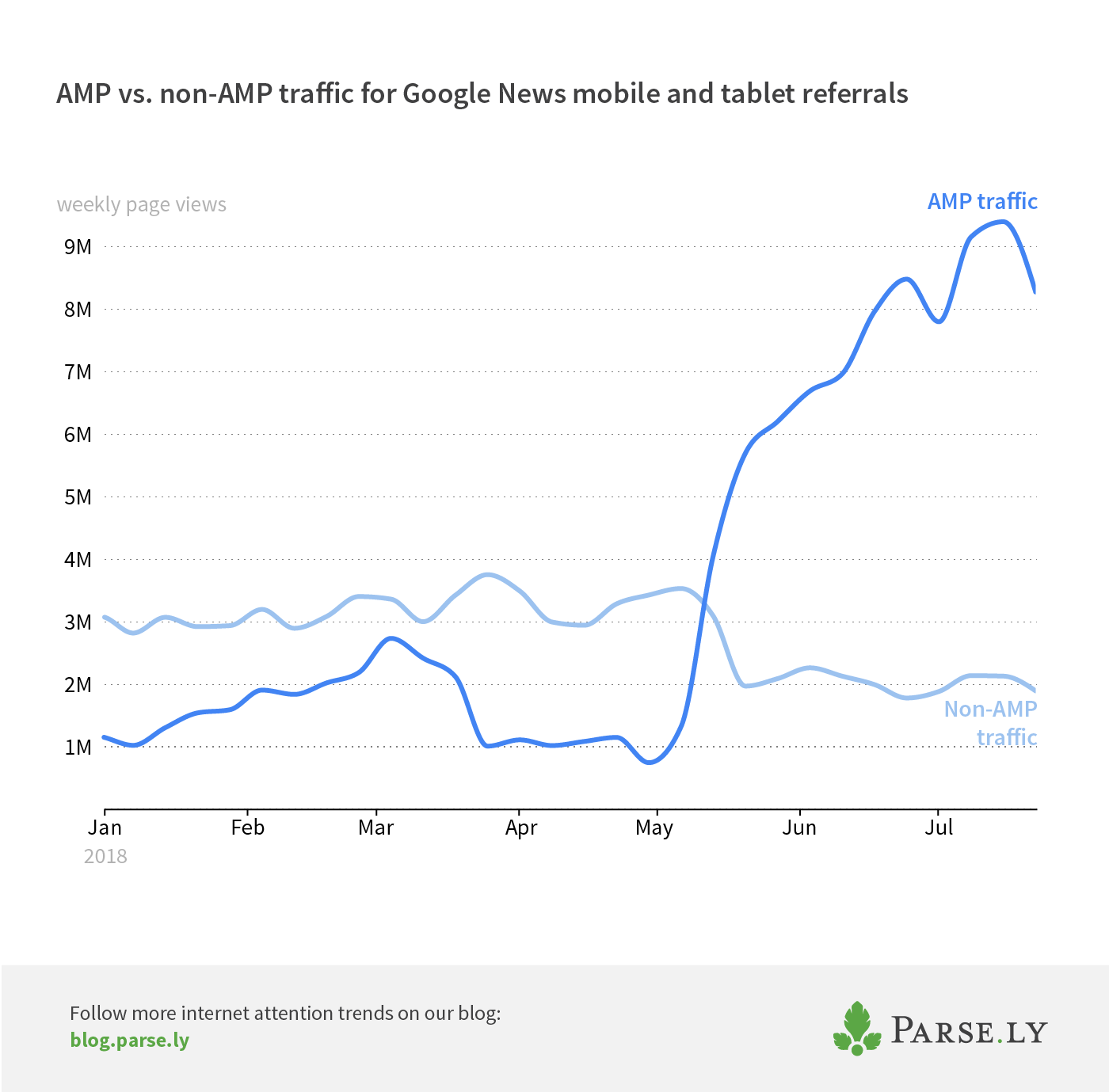 3. But wait! It’s not the same for every category or topic. External referral sources vary by category.

Google may have surpassed Facebook overall, but referral traffic breakdown varies depending on the topic of an article. That means some content types might see more traffic from search, some more from social, and some more from other categories.

In a study of twenty-three IAB content categories, Google search was the primary referrer for over half those categories, including Technology, Sports, Business, and Arts & Entertainment.

As of May 2018, Facebook was the primary referrer to lifestyle content categories (though that was about it). This category trend makes sense in light of changes to Facebook’s algorithm and user base demographics. 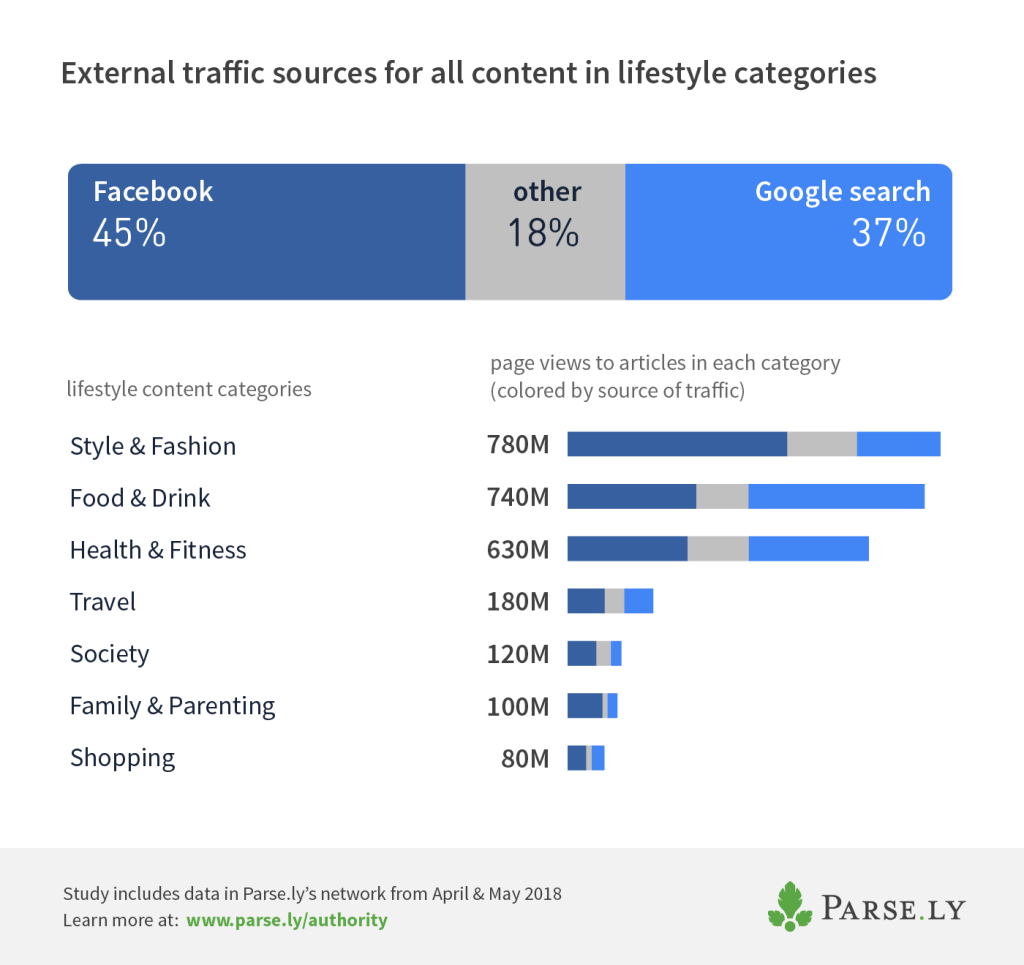 The algorithm change, which prioritizes posts from friends and family above brand posts, means content may get less exposure on Facebook overall. And as for the content that does surface? According to Pew Research Center, 68% of U.S. adults use Facebook. It’s easy to imagine a subset of these adults may be interested in categories like Family & Parenting, a category that receives 70% of its external traffic from Facebook.

Combined, the duopoly sends about three-quarters of external traffic to Parse.ly’s network. That being said, referrers that send a smaller percentage of traffic shouldn’t be overlooked. Their power lies in reaching specific audiences. 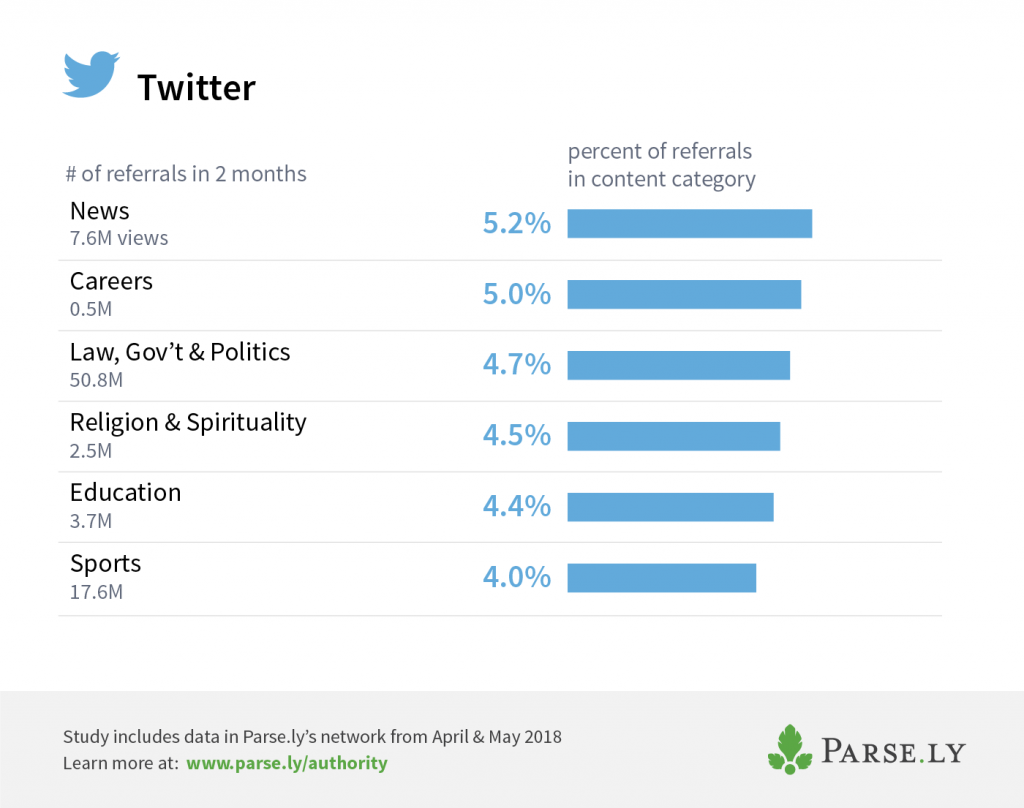 On Flipboard, which also drives about 2% of traffic to the network, the first and third most-trafficked content categories are the same as on Twitter. However, second place is different; Flipboard users discover Science content on the platform. 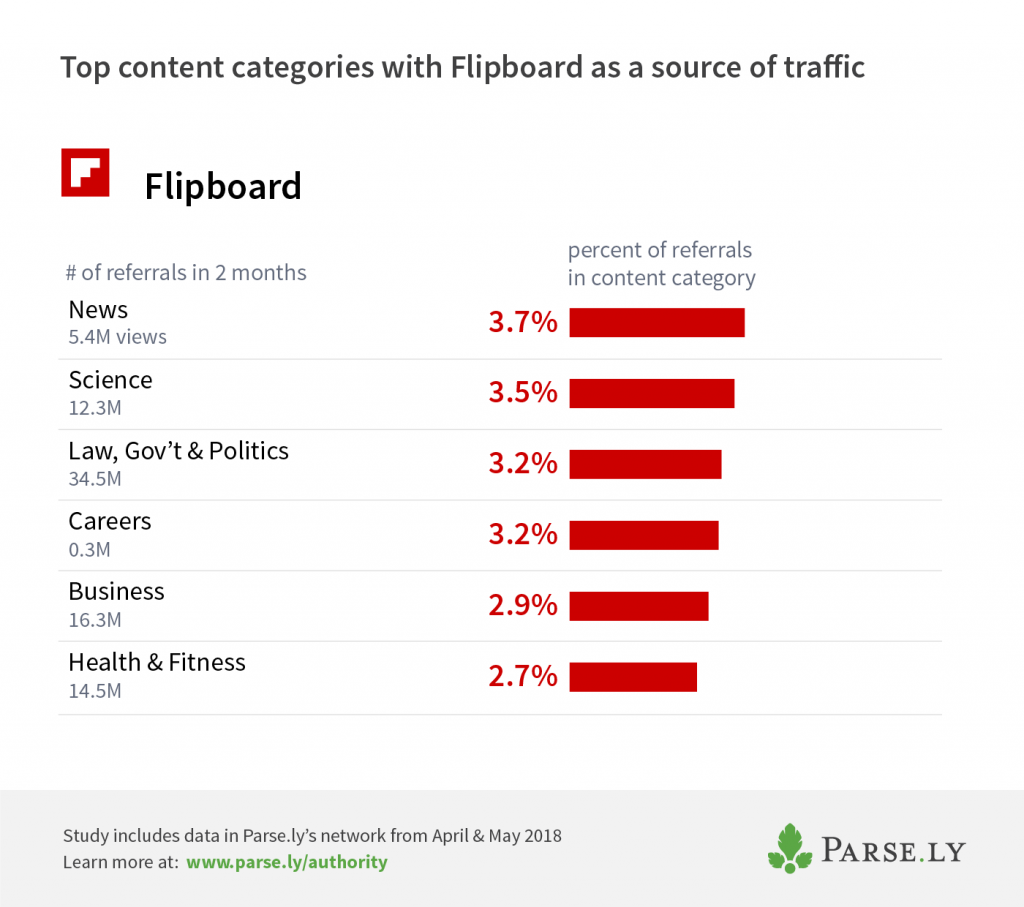 And on Pinterest, which drives less than 2% of traffic back to the network overall, seasonal and highly visual content resonates with users. Over 13% of referral traffic to Home & Garden content comes from Pinterest. The app makes a strong showing for Hobbies & Interests and Food & Drink content, too. 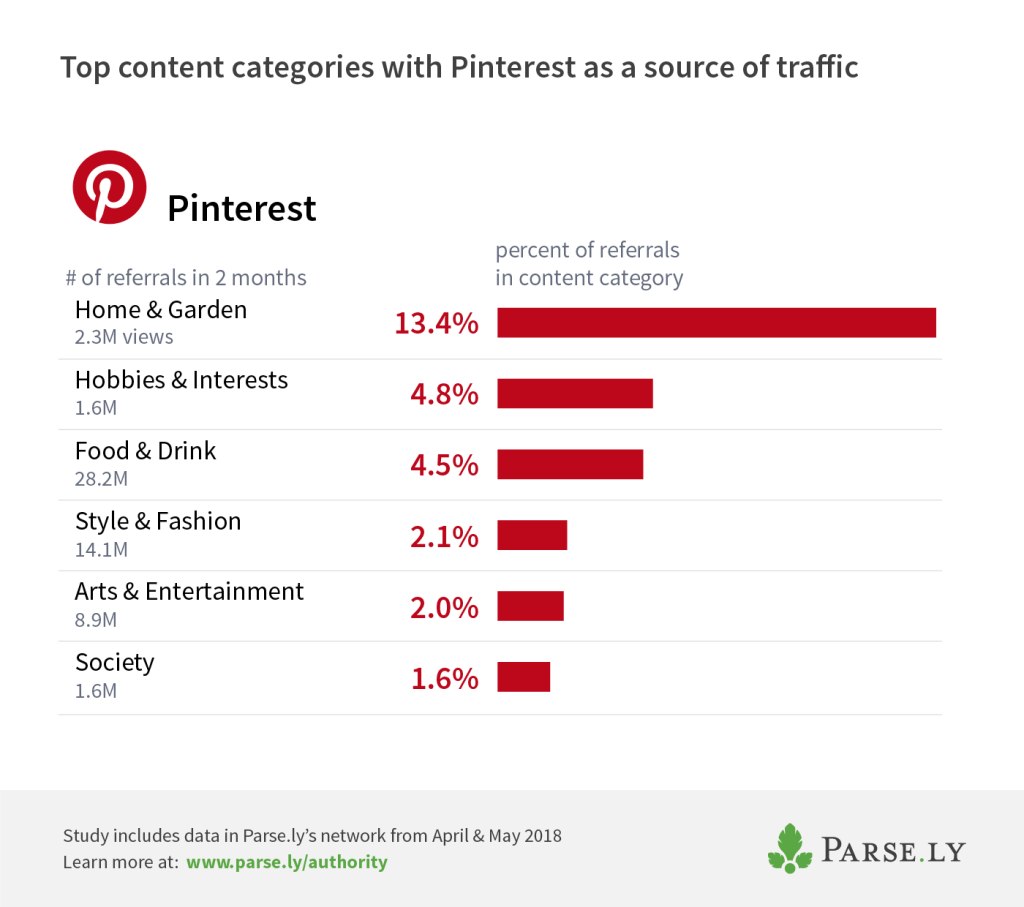 Not all content is consumed the same way. Maybe you find a new recipe or gardening tip and pin it to your Pinterest board for later. Maybe you tap an alert from Flipboard and read breaking news on your phone. Maybe a game is on and you’re following along with updates and the rest of the fans’ chatter on Twitter.

When content creators consider the different mindsets readers are in on different platforms—even the ones sending a smaller percentage of overall traffic—it can help them connect audiences with content on the channels where they’re paying attention.

5. Today: External referrals only account for half of traffic.

As we keep tabs on updates to the platforms our audiences and we ourselves use every day, it’s easy to lose sight of the broader picture. Luckily, that broader picture brings good news for content creators. 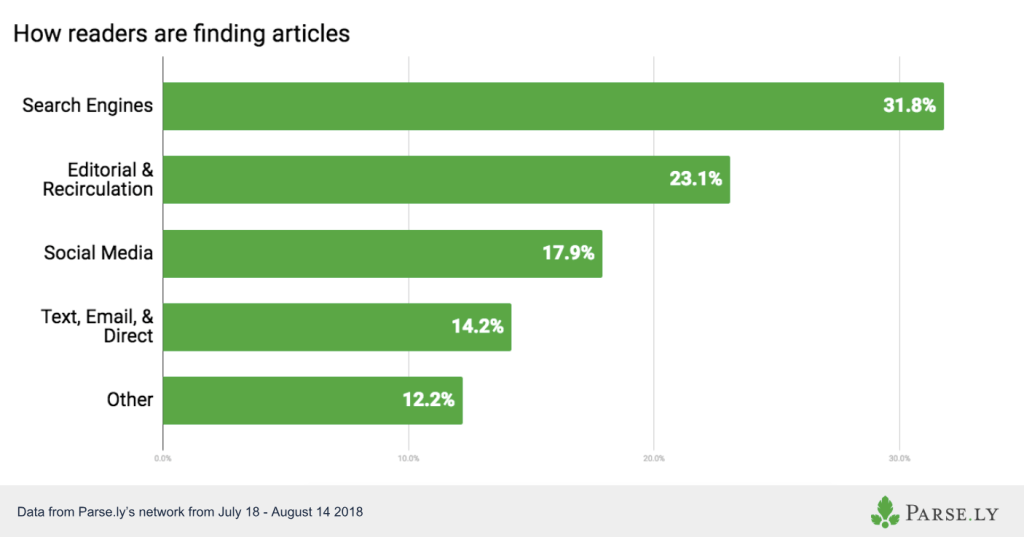 This kind of breakdown applies at a category level, too. Travel content, for instance, receives the most traffic from direct referrals, which includes clicking a link in an email, SMS message, or app.

So what can you take away from all this data? Keeping tabs on changes in external referral traffic is important. Not only does it help you understand your audience in the context of a wider competitive set, but it serves as a reminder of the benefits of relying on more than one traffic source—and that includes sources beyond search and social, too.

Referral traffic changes all the time. Keep tabs on the latest trends by using Currents, a view of what 1 billion people care about online.